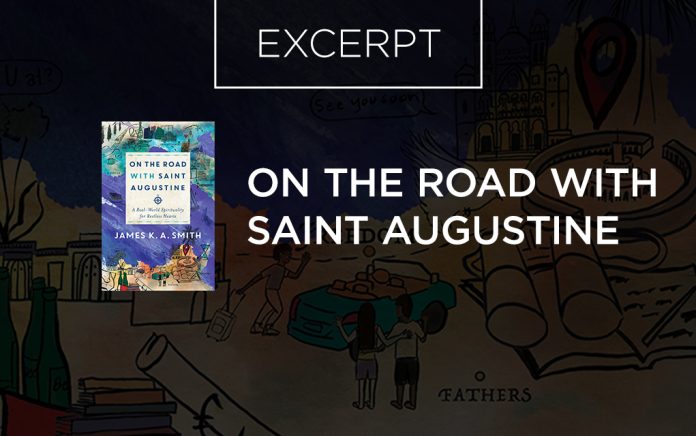 Augustine’s journey was not unlike our own journeys seeking the prestige of a “better” life.

Excerpted From
On the Road With Saint Augustine
By James K.A. Smith

A young man meanders through the bustle of the port at dusk, his last night in Africa. His father is dead. He has eluded his cloying mother with a lie that pains him, but it is a necessary evil if he’s ever going to escape her and her provincial faith. The waves of the Mediterranean lap on the coast of Carthage with hints of hope, as if carrying the transformation he’s expecting in Rome. The Eternal City is now invested with the glow of his success, like Gatsby’s green light blinking as a beacon of a future, hoped-for arrival. In Rome he’ll finally find what he’s been looking for. In Rome he’ll become the man he’s destined to be, the person he deserves to be. Augustine will have arrived.

Granted, yes, he once expected to find all this in Carthage, as close as one could get to Rome in Africa. It’s where he discovered the theater. It’s where he found his professional calling and started to move in literary circles. It’s where he fell in love with love. It’s where he found her. But now Carthage feels like a backwater: unsophisticated, provincial, a town not big enough for his importance. What had been a destination has now become a way station. The place he longed to reach is now just a launching pad to the new destination that promises happiness.

Just before dark, the sails begin to ripple. A fortuitous wind has arrived. Time to go. “The wind blew and filled our sails and the shore was lost to our sight.”

But when he gets to Rome, that beacon is still blinking. Now it’s coming from Milan, seat of the emperor. The next rung on the ladder is a post as an imperial rhetor; the networks the young man has cultivated are paying oﬀ. When the job oﬀer arrives, it comes with a promise that he will be transported via the imperial courier (cursus publicus). Funny how dingy Rome suddenly looks when the emperor sends Air Force One to whisk you away to his palace.

Milan for Augustine is our Manhattan or London or, well, Milan—a metropolis made of money and power. What John Foot says of contemporary Milan is true of the ancient city (and all other sites of earthly ambition): “Milan is a city obsessed by one thing, or rather by two—work and money.” It’s the place where you either “make it” or slink home in defeat. The hopes of such urban pilgrimages are perennial: to realize the “you” that’s been buried in the provincial version of yourself until now. These cities are like sculptors in a sense, unearthing the “you” that was always just beneath the surface. So you go to climb, achieve, win, conquer; you go to realize your potential and demonstrate your worth; you go to enjoy the good life and inhale the energy of influence, the freedom that comes with privilege; you go to remake yourself, but in so doing you expect to find the “you” you always knew you could be. It’s why you “find yourself” someplace else. The road is the road to that “you.”

Which is why this young man is so rattled when Milan disappoints him. Milan was supposed to be the end of the road, the destination he had envisioned as synonymous with happiness. Working in the precincts of the imperial palace, unleashing his creative energy and expertise, mingling with the great and the good, he would be seen for who he was: Augustine, the precocious provincial, the African from the edge of the empire who’d made it to the center. The happy life had a zip code, and Augustine now lived there.

From Outreach Magazine  Owning Our Scars

So why didn’t he feel at home? Why did the Unheimlich still haunt him? He thought he was coming to Milan to get close to the emperor; he didn’t expect to fall for a bishop.

Augustine is a saint who’s been down that road we still travel, fueled by ambition, trailing our hopes behind us. He’s familiar with all the things we carry.

In San Gimignano, a Tuscan hill town south of Florence—not far from the path that would have taken Augustine from Rome to Milan—is a small Augustinian church from the 13th century. Not to be confused with the magnificent Duomo in the center of town, the Chiostro di Sant’Agostino is a humble aﬀair just inside the north wall. On the day we visited, our heels clopped on quiet, narrow streets. We seemed to have the place to ourselves. A bright spring sun turned the sky neon indigo, the heavenly ceiling for a memorable alfresco meal of Tuscan pici and lamb ragù at the Locanda di Sant’Agostino Osteria next door.

But we were here for the frescoes inside the church. In the apsidal chapel is a stunning series of paintings that capture Augustine on the road. Painted by Benozzo Gozzoli in the 15th century (1464–65), the images narrate the life of Augustine from his childhood education in Thagaste to his death in Hippo. The cycle of 17 episodes, circling from left to right, bottom to top, is a bit like staging Shakespeare as a hip-hop drama: Gozzoli’s realism transposes Augustine to Renaissance plazas adorned in 15th-century attire. The realism demystifies the saint. Because we can imagine him being like us, a solidarity that is at the heart of the Confessions, it encourages imitation. When 4th-century Carthage looks like 13th-century Florence, and ancient Hippo looks like medieval Milan, it might help us see why the aspirations of ancient Rome aren’t so different from those of contemporary Los Angeles.

From Outreach Magazine  I'm 'Pretty Much' a Christian

Gozzoli’s rehearsal of Augustine’s life is inflected with intriguing emphases. Education and teaching dominate the cycle, from Augustine’s own boyhood education in Africa to his role as teacher in Rome, Milan and Hippo. This is Augustine the humanist rediscovered in the Renaissance—the Augustine who read Plato, reformed rhetoric and championed the liberal arts. Not surprisingly, his mother Monica appears in five of the scenes, including a heartrending scene of her being left behind.

But utterly singular is Gozzoli’s fascination with Augustine’s various journeys. The frescoes might as well have been called “On the Road with Augustine.” Gozzoli paints Augustine on the move. We see Monica praying he won’t leave, and then immediately beside it Augustine’s journey to Rome, Monica now at the left with hand upstretched in prayer over the saint at sea.

We see him landing at the port in Ostia, en route to the Rome that will disappoint him. The cycle later brings us back to Ostia to witness the death of Monica. But in Gozzoli’s unique attempt to convey temporal dynamism in a single static frame, through the columns on the right we see Augustine set sail, returning to the Africa he’ll never leave. True to one of the most enduring aspects of Augustine’s character, he never travels alone.

The panel that most captivated me, though, depicts Augustine’s departure from Rome for Milan. Augustine has acquired relationships of note. Dignitaries attend his departure. Medieval Rome is in the distance behind him, the Tuscan hills lie before them, and over the horizon lies Milan. The regal transport of the imperial courier means he can travel on horse. The beasts are stately, powerful, and—curiously—looking right at us. Are you coming? their eyes seem to ask. Have you considered this road? Do you know where this leads? Does he?

Excerpted from On the Road with Saint Augustine: A Real World Spirituality for Restless Hearts by James K.A. Smith, © 2019. Published by Brazos Press, a division of Baker Publishing Group. Used by permission.