Home Resources Books What if You Suddenly Lose Everything? 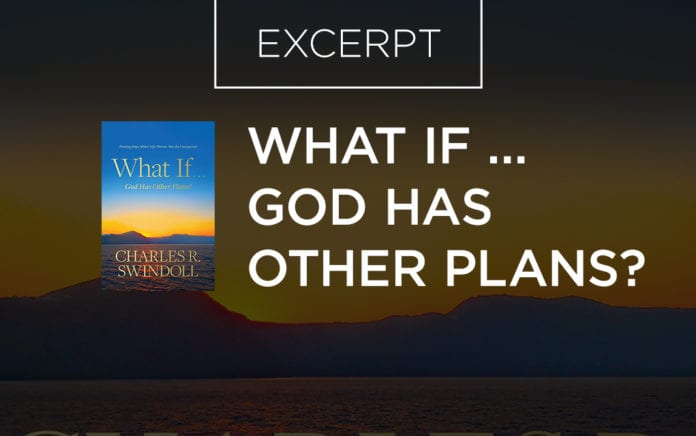 No matter what circumstances come our way, we must remember that God is our sovereign heavenly Father.

Excerpted From
What If … God Has Other Plans?
By Chuck Swindoll

Sometimes life can be humming along as usual, and then in a matter of seconds everything falls apart. In those times of sudden loss, life can become borderline unbearable. It may be the death of a child, the loss of your home or a debilitating illness or injury. The suddenness of such tragedies almost collapses us emotionally. What if you were to lose everything? What would you do? How would you respond?

As a nation, we lost our sense of security in an instant on December 7, 1941, when the Japanese bombed Pearl Harbor. I was alive then, though only a boy. I was in the car with my mother and dad, my brother and my sister on our way to a winter vacation spot in South Texas.

Hearing news of the attack on the car radio, my dad calmly said, “We’ll turn around now. We can’t go on vacation if we are at war.”

Everything changed. I wondered if we’d ever laugh again.

On November 22, 1963, the United States suddenly lost our president, John Fitzgerald Kennedy, who was assassinated in Dallas. Many who are my age and younger remember where they were when that tragic event happened.

Most of us will never forget the events of September 11, 2001, when the lives of thousands of innocent people were suddenly lost and, along with them, some of our freedoms. That was the day terrorists attacked the Twin Towers in New York and the Pentagon near Washington, D.C. The attack resulted in the collapse of the Twin Towers and simultaneously snuffed out the lives of many people who were going to work as usual. Those savage acts struck at the heart of what it means to be an American. In an instant, everything seemed to change, and our lives suddenly filled with fear.

Those living in the Tohoku region of Japan lost everything on March 11, 2011, when a massive earthquake deep in the ocean triggered a monster tsunami that wiped out everything in its path. By the time the wave rushed across the coastline, entire villages and their inhabitants were destroyed, and countless homes, businesses, cars and buses were lost. Nearly a quarter of a million people perished.

These are only a few of the large-scale disasters I could mention. Sometimes the crisis strikes closer to home. The scale might be smaller, but the sense of devastation is the same.

From Outreach Magazine  Building Bridges to Our Muslim Neighbors

My wife can still recall many heartbreaking details of the scene she witnessed as a four-year-old: She watched helplessly with her mother, holding her baby sister in her arms, as their small farmhouse on the outskirts of Tyler, Texas, burned to the ground. Everything they owned was reduced to ashes.

In recent years we’ve witnessed massive hurricanes and overwhelming floods that have lifted entire houses off their foundations and, in doing so, swept away the hopes and dreams of countless victims. If that weren’t enough, I could name the cruelest tragedy of all—when monsters walk into classrooms filled with innocent children and unleash horrifying carnage with sprays of bullets. Suddenly parents are without their children. Life in those moments becomes unbearable.

What if you were to lose everything?

It’s easy to respond by saying, “That won’t happen to me.” Oh, wait. Stop. You don’t know that. You and I have lived long enough to know it could happen at any time to any one of us. Another bombing, another terrorist attack, another explosion, another senseless murder, another terrible car collision—each event could bring untold losses, crippling devastation and horrible suffering.

Cynthia and I knew a family many years ago who suffered such a tragedy. One night the father said goodbye to his family as the wife and his three children drove to their classes at a local gym. The children were gymnasts training for competition.

That night, none of them came home. As the minutes turned into hours, this man grew more anxious. Then he heard sirens in the distance, and a cold chill ran down his spine. The sirens seemed too close for comfort. He drove up over the hill near their home and saw that there had been a horrible collision. The flashing beacons of the emergency vehicles unnerved him.

He later found out that his wife and all three of his children had been killed in a terrible head-on collision. They all died instantly.

Shocked, disillusioned and blinded by grief, he tried to make sense of an empty home and a future without anyone in the family he loved. Life was suddenly unbearable. He had lost everything.

None of us are immune to loss. If your life hasn’t been touched by tragedy yet, it is likely only a matter of time before you encounter a crisis of some kind. In this broken and fallen world, safety and security are not guaranteed.

Over these many years in ministry that the Lord has granted me, one of my great goals has been to proclaim this all-important truth: God is in charge. He is over everything. He is sovereign. He rules graciously and powerfully from heaven in perfect wisdom, love and grace (see Ps. 11).

Whatever you are facing, adverse or delightful, your life is all about God … his will … his way.

But we easily lose our theological moorings when we insist on living horizontally. When we do, the winds of adversity eventually cause us to drift from what we truly believe. How much better to choose a response of faith that submits to God’s sovereign will, yielding to his gracious purposes in both giving and taking away those things and people we hold dear.

After all, that’s his sovereign right. God doesn’t exist to make us healthy and happy. He exists to glorify his name. We are the channel through which that glory flows. Faith consists in knowing your heavenly Father is at work for his glory and for your good, to mold you into the image of his Son, Jesus. That’s what life is about. If it takes the loss of everything to gain that vertical perspective, then embrace the loss. If it takes your broken dreams and an abandonment of what you had counted on all your life to realign your life vertically, then abandon it. It is all about God, who gives and takes away.

If you learn nothing else in your years walking with the Lord, learn and accept that God is in control, that he is sovereign. Embrace the fact that what you are going through is divinely guided by a heavenly Father who loves you too much to do anything cruel to you. Remember: God exists in a realm beyond our comprehension. He’s not some crusty old man with a long beard blowing wind out of the north. God is incomprehensibly great. He’s omniscient. He’s omnipotent. He’s omnipresent. He’s eternal. He’s ageless and timeless. He’s good. He’s gracious. He’s loving and just. And he’s always right—even when you feel like what happened to you was all wrong.

Excerpted from What If … God Has Other Plans? Finding Hope When Life Throws You the Unexpected by Charles Swindoll, releasing from Tyndale House Publishers in September 2019.