Home Resources Books What Is the Point of Suffering? 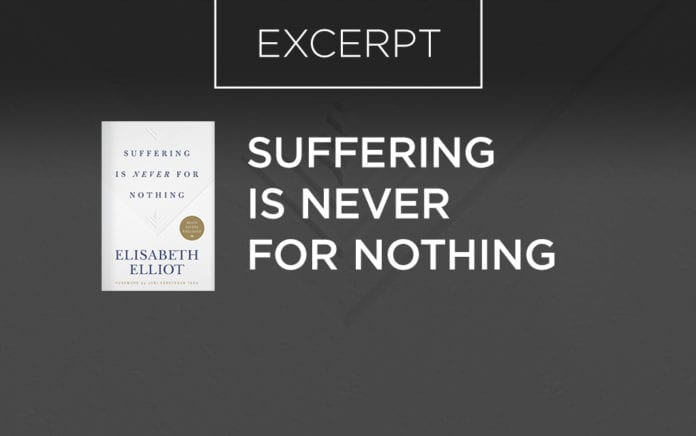 Hideous as it is, suffering is never for nothing.

Excerpted From
Suffering Is Never For Nothing
By Elisabeth Elliot

When I was 9 years old, I lived in a neighborhood of 42 boys, but I had a friend who lived about 6 blocks away whose name was Essie. And Essie and I were both 9 years old when she died. When I was probably 3 or 4 years old, we had a guest in our home who was on her way to China as a missionary. Her name was Betty Scott. She went to China and married her fiancé John Stam. A few years later, I’m not sure just how old I was, maybe 6 or 7, my father came home one evening with a newspaper telling that John and Betty Stam had been captured by Chinese communists, marched almost naked through the streets of a Chinese village and had then been beheaded.

You can imagine the impression this made on the mind of a young child in view of the fact that Betty Stam had sat at our supper table and had given us her testimony as she was on her way to China. I also remember very vividly the newspaper stories of the kidnapping of Charles Lindbergh’s baby, and I would go to sleep at night imagining that I saw a ladder coming up by my window. And my parents, not knowing that I was concerned in this way, didn’t think to tell me that there wasn’t really a whole lot of danger that anybody was going to be interested in kidnapping a child like me because we were not really what you might call rich.

Nevertheless, I did have some experience of death as a small child. And just a few weeks ago, to bring it more up to date, some friends of my husband’s and mine called to say that their little 4-year-old child, who was born with spina bifida, was doing very well. But the mother was pregnant and for various reasons had had some tests which had revealed that the child she’s now carrying also has spina bifida. And so they were calling just to say we’re hurting. Please pray for us. And when I hear stories like that, it’s what makes me think that my own experience of suffering is really very little.

The question is unavoidable for a thinking person. Where is God in all of this? Can you look at the data and believe? And it’s the question that was put to Alyosha by Ivan Karamazov in Dostoevsky’s famous novel The Brothers Karamazov recounting the story of a little girl of 5.

Ivan said to his brother, Alyosha:

”These educated parents subjected the poor 5-year-old girl to every possible torture. They beat her, flogged her, kicked her, not knowing why themselves, until her whole body was nothing but bruises; all night in the outhouse, because she wouldn’t ask to get up and go in the middle of the night (as if a 5-year-old child sleeping its sound angelic sleep could have learned to ask by that age)—for that they smeared her face with her excrement and made her eat the excrement, and it was her mother, her mother who made her! And this mother could sleep while her poor child was moaning all night in that vile place! Can you understand that a small creature, who cannot even comprehend what is being done to her, in a vile place, in the dark and the cold, beats herself on her strained little chest with her tiny fist and weeps with her anguished, gentle, meek tears for ‘dear God’ to protect her—can you understand such nonsense, my friend and my brother, my godly and humble novice, can you understand why this nonsense is needed and created? … And therefore I hasten to return my ticket. And it is my duty, if only as an honest man, to return it as far ahead of time as possible. Which is what I am doing. It’s not that I don’t accept God, Alyosha, I just most respectfully return him the ticket. … Tell me straight out, I call on you—answer me: Imagine that you yourself are building the edifice of human destiny with the object of making people happy in the finale, of giving them peace and rest at last, but for that you must inevitably and unavoidably torture just one tiny creature, that same child who was beating her chest with her little fist, and raise your edifice on the foundation of her unrequited tears—would you agree to be the architect on such conditions? Tell me the truth.”

And what I want to share with you is what I see to be the straight truth with no evasions and no clear, flat platitudes. It’s very fresh in my mind just this week, a picture that I saw in Time magazine of an inconsolable newborn baby whose mother was on crack cocaine. Just to look at that picture brought down on my own head, as it were, everything I was planning to say to you in this series.

I happened to be sitting on the plane yesterday next to a woman who was reading a book called Master of Life Manual, which according to the cover was about metaphysics, brain-mind awareness, human potential principles and this stunning statement: “Create your own reality now.” And I thought I would hate to be down to such an extreme that I had to create my own reality in the face of the data of human experience.

So I would ask the question: Is there a reason to believe that suffering is not for nothing? Is there an eternal and perfectly loving purpose behind it all? If there is, it’s not obvious. It doesn’t exactly meet the eye. Yet if for thousands of years in the face of these stunning realities—this terrible truth—people have believed that there is a loving God and that God is looking down on the realities around us and still loves us. If these people have still continued to insist that God knows what he’s doing, that he’s got the whole world in his hands, then I repeat, the reason cannot possibly be obvious. It can’t be because those thousands of people were all deaf, dumb, blind or stupid and incapable of looking clearly and steadily at the data that you and I are constantly having to look at. What is the answer?

F. W. H. Myers in his poem “St. Paul” wrote these words: “Is there not wrong too bitter for atoning? What are these desperate and hidden years? Hast thou not heard thy whole creation groaning, sighs of the bondsmen and a woman’s tears?” The answer is not obvious. There must be an explanation somewhere. And it’s my purpose to try to get at the explanation, and then to see if there’s something that you and I can do about this question of suffering. I’m convinced that there are a good many things in this life that we really can’t do anything about, but that God wants us to do something with. And I hope that by the time I’m finished, I will have made myself clear.

Now the word suffering may seem very high flowing and perhaps much too dignified for our particular set of troubles today. And I can look around this audience to whom I’m teaching this content and I don’t know a person here. I have no idea who might receive this content later on in some other form. But if I knew you and if I knew your stories, then I would know that I can’t possibly speak personally to every need that’s here, to every kind of suffering. And I’m fairly sure that there would be some people here tonight who would be saying, “Well, I really don’t know any such thing as suffering. I’ve never been through anything like Joni Eareckson or Jo Bailey or even Elisabeth Elliot,” and of course, that’s true. And I can say the very same thing if I knew your story. I could say, “Well, I’ve never been through anything like that.”

So I want to give you a definition of suffering which will cover the whole gamut from when the washing machine overflows or when the roast burns and you’re having the boss for dinner that night, all those things about which our immediate human reaction is Oh, no! From that kind of triviality, relatively speaking, to your husband has cancer. Your child has spina bifida or you, yourself, have just lost everything. I think you’ll find that the definition that I’m going to give you will cover that gamut.

The things that I’m going to try to say to you will apply to the small things, those sometimes ridiculously small things, that if you’re anything like me, you get all upset about and all bent out of shape about, that matter not at all by comparison with the big things. And here it is, my definition of suffering: “Suffering is having what you don’t want or wanting what you don’t have.” I think that covers everything.

Malcolm Muggeridge said, “Supposing you eliminated suffering, what a dreadful place the world would be because everything that corrects the tendency of man to feel over-important and over-pleased with himself would disappear. He’s bad enough now, but he would be absolutely intolerable if he never suffered.” Muggeridge gets at the heart of what I want to say. It’s never for nothing.

Now how do I know that? The deepest things that I have learned in my own life have come from the deepest suffering. And out of the deepest waters and the hottest fires have come the deepest things that I know about God. And I imagine that most of you would say exactly the same. And I would add this, that the greatest gifts of my life have also entailed the greatest suffering. The greatest gifts of my life, for example, have been marriage and motherhood. And let’s never forget that if we don’t ever want to suffer, we must be very careful never to love anything or anybody. The gifts of love have been the gifts of suffering. Those two things are inseparable.