Home Resources Books The Ways We Determine Right From Wrong 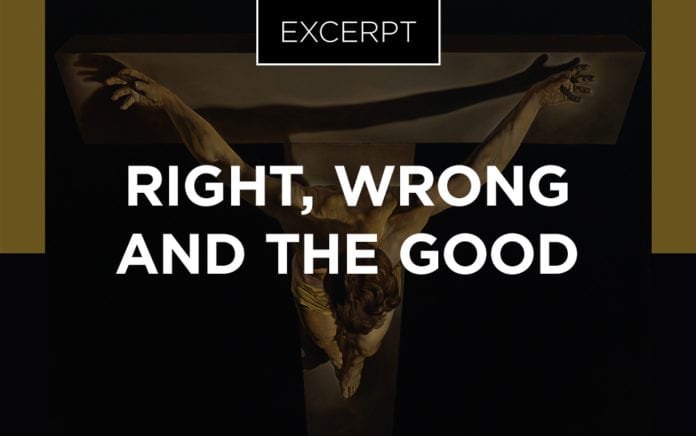 There are several ways we determine right from wrong in a given situation. Here are some frameworks upon which we build our ethics.

Excerpted From
Christian Ethics and Moral Philosophy
By Craig A. Boyd and Don Thorsen

Right, Wrong, and the Good

Traditionally, moral theories have been divided between those that ascribe priority to the notion of what is right (and the corresponding idea of one’s duty) and those that see the good (in terms of utility or interests) as the most important factor. Those ethical theories that advocate for the priority of the right are forms of deontological ethics, while ethical theories that see the good as primary are forms of consequentialism.

Deontologists emphasize the idea that an action is right or wrong regardless of the consequences. Moreover, one has a binding moral obligation to perform one’s duty once it becomes known. For example, a deontologist would say that one is morally bound to keep one’s promises regardless of any good that might come from breaking them, since one has a duty to fulfill as a result of the obligation freely entered into when making the promise.

Consequentialists see morality primarily in terms of the results of any given rule or action. They tend to avoid talk of duty and prefer to think in terms such as “the greatest good,” “net utility,” or “maximizing interests.” A consequentialist would only see keeping a promise as valuable if it promoted good outcomes. Promise keeping, if adopted as a general rule, might promote overall good in some contexts. It all depends on what the consequences are. Lying might actually save someone’s life or preserve a person’s dignity in some situations.

The distinction between deontology and consequentialism often fails to account for theories such as virtue ethics, feminist ethics and various forms of existentialism that resist being primarily concerned with either duty or consequences. These other theories emphasize such ideas as the development of specific virtues, authentic and responsible choices or the practice of compassion.

Moral issues often take place at the intersection of all of these concerns. In both the Hebrew and Christian Scriptures, which together Christians view as their Bible, we see approaches that sometimes emphasize duty. In some instances, moral actions are associated with punishment and reward. At other times, development of personal character is encouraged. Children are told, “Honor your father and your mother … so that your days may be long and that it may go well with you in the land that the Lord your God is giving you” (Deut. 5:16). But at other times, God issues commands without qualification, lending to the idea that some actions are simply right in themselves—such as “You shall not murder” (Ex. 20:13). At still other times, people are told “to do justice, and to love kindness, and to walk humbly with [their] God” (Mic. 6:8).

We can see this conflict played out in contemporary situations when people try to judge among competing alternatives. Consider the case of war. Some Christians appeal to the idea that it may be important to kill in a “just war” so that there may be peace or to protect innocent lives from unjust aggressors. The appeal here is to a consequentialist intuition that God wants peace and that killing, while unfortunate, must be done to achieve peace. In contrast, there are some Christians who appeal to a deontological approach that sees the command against killing to be binding in all circumstances, regardless of the consequences. Others see the command to protect innocent life at all costs as another kind of moral obligation that does not permit exceptions. Still others look to the life of Jesus, when he tells Peter, “Put your sword back into its place; for all who take the sword will perish by the sword” (Matt. 26:52). The idea here is that a life of peacemaking and compassion cannot be understood entirely in terms of either doing one’s duty or maximizing overall utility. In order to understand why Christians might take differing views on the question of killing, we must first consider how to understand the ways in which Christian ethics have been developed and applied.

From Outreach Magazine  The Next Christians: The Good News About the End of Christian America

Excerpted from Christian Ethics and Moral Philosophy by Craig A. Boyd and Don Thorsen, ©2018. Used by permission of Baker Publishing BakerPublishingGroup.com.