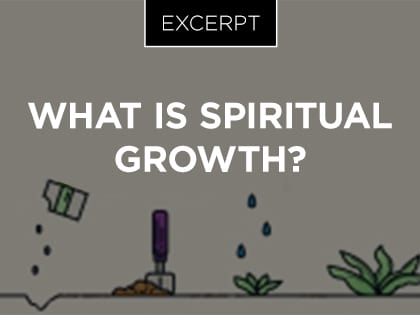 God cares about more than the Sunday morning aspects of our lives, and in fact, wants to restore every aspect.

Excerpted From
How to Grow
By Darryl Dash

Spiritual growth isn’t about becoming less human. It’s about God restoring us and the world to what it should be.

I used to think that God cared about certain things—prayer, pastors and church—but I couldn’t figure out what God thought about the rest of life. Are we supposed to endure most of life so that we could get to the important parts on Sunday? I wondered. It seemed like spiritual growth didn’t have much to do with going to school, paying bills, working or parenting. God was a part of my life—the most important part—and then there was everything else.

One day I read a sentence from a monk named Brother Lawrence who served in a monastery in the 1600s: “I flip my little omelette in the frying pan for the love of God.” This startled me. He didn’t seem to see a difference between ordinary things like cooking and God. His whole life mattered to God.

I began to notice how much of the Bible is about ordinary life: eating, working, marriage and parenting. I learned that God cares about the world—not just church, but everything. God doesn’t want us to separate our spiritual growth from the rest of life; he wants it all.

I also began to learn that God cares so much about this world that he plans to restore it. I was once asked to speak to a classroom of young children about heaven. I spoke of gates of pearl and streets of gold. The children pressed me: what will life be like there? I couldn’t tell them. Frankly, heaven didn’t sound exciting to me when it sounded otherworldly. I pictured choirs and clouds. Beyond that, I had no ideas, except that it didn’t sound fun.

I’d missed that our future isn’t heaven, but rather heaven coming to earth. “Then I saw a new heaven and a new earth, for the first heaven and the first earth had passed away, and the sea was no more,” John writes in Revelation. “And I saw the holy city, new Jerusalem, coming down out of heaven from God, prepared as a bride adorned for her husband” (Rev. 21:1–2). Best of all, God will come to live with us. “And I heard a loud voice from the throne saying, ‘Behold, the dwelling place of God is with man. He will dwell with them, and they will be his people, and God himself will be with them as their God’” (Rev. 21:3). I’d also forgotten about our resurrection bodies. We won’t escape living in our bodies on this earth; instead, we’ll finally enjoy living on the earth as humans the way that God intended.

From Outreach Magazine  Why You Need a Youth Ministry Succession Plan

I began to realize that God cares deeply about this world right now. Even more, he cares about us. God’s intent for us is the restoration of all things, including our humanity. Sin began with individuals and spread like a disease throughout the world. Similarly, God restores the world first by restoring individuals, but he intends to do more. He will one day restore everything. The world will once again be what he intended in the first place, only better.

This earth matters. We’re meant to enjoy it. Some may sing that the world is not their home, and they’re just passing through. I know what they mean, but they’re wrong. Earth—one day the new earth—is exactly where God intends for us to be. God doesn’t plan to snatch us away from earth to live in heaven forever. His plan is that we would live, in our resurrected bodies, in his restored world, with his presence. God’s plan isn’t to destroy the world so we can escape it; it’s to recreate the world so that we can live with it. We’re designed to be worldly saints.

Spiritual growth isn’t about an escape from this world. It’s about recovering who we were meant to be in this world, longing for and praying for the restoration of all things. It’s about becoming more human as we move closer to God’s original intent for humanity in this world.

God cares about every part of our lives. He’s not just interested in what we do at church on Sundays. He cares about who we are at school and work, in our homes and cars, in coffee shops and restaurants and every moment of our day-to-day lives. There’s no such thing as a Christian life that is detached from our recreational, mundane or work life. All of it belongs to him. And the purpose of our lives isn’t for us to become otherworldly; it’s for us to flourish as humans in the world that God has created. It’s also to fulfill our roles within this world: to love God, serve others, cultivate the earth through our work, and rest.

From Outreach Magazine  Isolation: The Soil for Collapse

Spiritual growth is about all of life.

Excerpted from How to Grow: Applying the Gospel to All of Your Life by Darryl Dash (©2018). Published by Moody Publishers. Used by permission.