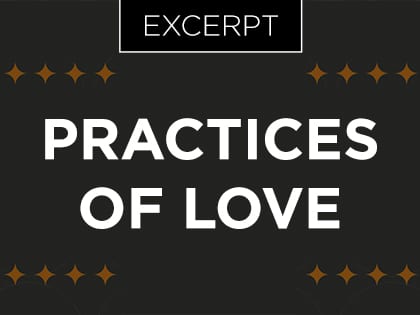 Our habits include sinful patterns, so living rightly takes practice. We can learn a lot from the 4th century monastics.

Excerpted from
Practices of Love
By Kyle David Bennett

A long time ago in a land far, far away, a Christian monk wrote a book and dedicated it to a bishop. The monk’s name was John Cassian, and in this book were the notes he took from observing several Egyptian monasteries that he had visited. In his book, Cassian described to the bishop the daily life he encountered in these monasteries and explained why the monks did what they did. He organized his observations of their daily life around eight principal vices that prevent the monks from living the way that they ought to live, and he offers disciplines for them to practice to counter these vices. He made clear that the monks do what they do on a daily basis to fix or prevent these vices from growing in their lives.

We may not be all that familiar with this word “vice,” but it’s an important word in the Christian tradition. It comes from the Latin word vitium, which can have various meanings: fault, defect, blemish, imperfection, corruption or wickedness. Our English word “way” comes from vita, which is in the same family as this word vitium. A vice (vitium) is a defective or imperfect way (vita) of doing something. It’s the wrong way to engage in some sort of activity or the wrong way to behave. Another word that captures this idea is “malformed.” A vice is a malformed way of doing something, a bad or evil (mal) way of doing something. Throughout this book I use the word “malformed”—not “vice”—to communicate the idea that, like these monks, we do some very basic activities the wrong way. We do them badly, and sometimes even evilly.

The eight principal vices that Cassian discusses at length are gluttony, fornication, avarice, anger, sadness, acedia, vainglory and pride. The monks gorge in their eating. They are greedy in their owning. They are prideful in their thinking. They are lazy in their work. This is not how they should live. It is clear from Cassian’s treatment of them that these eight principal vices (which give rise to other “offshoot vices”) comprise a way of life. They are like a package—or we might say that they come in bulk. Each vice works together. There is continuity between them, with each vice playing off another or building on another: gluttony feeds fornication, and vainglory gives rise to pride, for example. Although all of them are bad, Cassian notes, some of them are more destructive than others. Some are easily expressed in everyday living and have more disastrous effects than others, which means that some are more difficult to control and uproot than others. Pride, for example, is more difficult to uproot than gluttony. It’s easier to stop eating so much than it is to stop thinking so highly of oneself. Because each vice builds on another, Cassian notes, the monks have to combat them in bulk. In other words, they have to live differently, not just do a couple of things differently.

In a quite detailed exposition, Cassian explained to the bishop how these vices emerge in the monks’ daily activities and how they can be fixed through certain “institutes” and “remedies” in the community. By “institutes” and “remedies” Cassian meant rules and practices. So he essentially suggests that the community of monks—or the monastery—take up certain rules and practices to help them fix the malformed ways that they do daily activities. And they must do this together as a community. Together they will observe rules and institute practices so they can perform these activities in the right way. The remedies that the monks practice to rid themselves of these vices are what we nowadays call spiritual disciplines. They practice silence, solitude, fasting and feasting, Sabbath keeping, meditation and simplicity. They change the way that they dress, own, think, eat, interact, talk, work and rest. Spiritual disciplines will fix their habits and practices and get them living the way that they should in community or in shared spaces together.

Growing up as a Protestant evangelical, I used to think that monks (and nuns) make vows to cloisters to escape the world and enjoy personal intimacy with God. Fed up with the impurities of the world, they go away and hide in the far corners of the earth where they can be pure and undisturbed by the inconveniences of life while they wait for the Lord to return. This always struck me as rather selfish and cowardly. “Must be nice to get away from the inconveniences of life and annoying miscreants of the subway and enjoy the peace and quiet,” I thought to myself. But, as Cassian’s observations make clear, this couldn’t be further from the truth. Monks and nuns make vows not to a cloister but to a community. And they do so not to escape the world but to enact a different one. They commit to living with others and to living differently with these others. They commit to disciplining their daily deeds for their own sake and for the sake of others. They take living in community very seriously—the way God does, as we saw in Isaiah.

Now some of us may be thinking, “A long time ago in a land far, far away is right! This is a monastic community! Cassian was a fourth-century monk! He’s talking about monks! To a bishop, nonetheless! I’m a cashier at a grocery store. I don’t live in the desert. I haven’t taken any vows. I don’t live in an intentional community with others—I live in a six-hundred-square-foot apartment by myself! We’re worlds and centuries apart. What could this even mean for me? What hath fourth-century Egypt to do with twenty-first-century El Paso?” Our lives may take different shapes and twists and turns, but the cashier and the cenobite, the hedge fund investor and the hermit, the nun and the nurse are not so different. As followers of Jesus, we are all called to the same thing: God and citizenship in his kingdom. We are all called to bring our whole selves and all aspects of our lives under the power and sway of our King. We are all called to bring the little things as well as the big things under his rule. Like the ancient brothers and sisters before us, we are called to discipline our daily deeds, and we are called to love our neighbor as ourselves.

”We must serve God, everyone in his own way, wearing either a leather apron or an academic gown—it does not make any difference. Everyone has to serve God, wearing rubber boots or carrying a gasoline can, having as emblem a hammer and sickle (these belong to us) or a painter’s palette, rather than a censer as such. We have to serve God, everyone in his own place in the new God-created community.”

We can learn a thing or two about discipleship and the discipline required of a disciple from our fourth-century monastic brothers and sisters. Like them, we do basic, ordinary activities every day. We get dressed, we buy things and take them home, we think, we eat, we hang out with friends, we talk (a lot), we work (a lot) and we rest. But what we don’t realize is that we tend to do these activities in selfish and vicious ways. We do these things in ways that hurt our neighbor (and are unhealthy for us). And we are completely unaware of it because we have been doing things this way since childhood. And to top it all off, this way of doing things is unassumingly.

Excerpted from Practices of Love by Kyle David Bennett. Used by permission of Brazos Press, a division of Baker Publishing Group, ©2017. www.bakerpublishinggroup.com