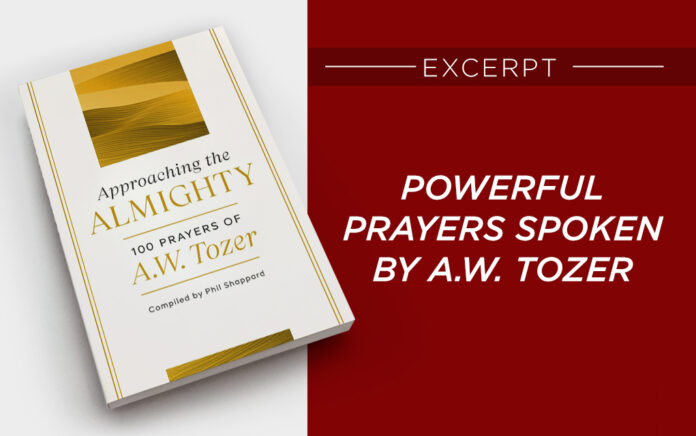 Possibly the greatest single impact of this self-educated man started on the floor of his Chicago church study as he would daily don his old prayer trousers and then, for some time, lay prostrate on the floor as he sought God.

Many tributes have been written and said of Aiden Wilson Tozer. His expressed thoughts on God have deeply impacted several generations of those who call upon Jesus Christ as Lord. Some may point to books such as The Knowledge of the Holy or The Pursuit of God as evidence of Tozer’s keen insight to illuminate a seeking pilgrim’s journey into the heart of God.

Possibly the greatest single impact of this self-educated man started on the floor of his Chicago church study as he would daily don his old prayer trousers and then, for some time, lay prostrate on the floor as he sought God.

“Everything that God has ever used in me to help others, He has given me on my knees with my open Bible,” he said in a 1950s sermon. “God has been pleased to use the book The Pursuit of God far beyond the borders of the Christian and Missionary Alliance.” He went on to describe his writing process: “In almost every chapter, I got on my knees with God alone seeking cleansing and power and purity and righteousness in my spirit. Then, with a notebook, taking down notes, and from that, writing. Brethren, that’s what we need, more than we need anything else in the wide world.”

I first heard the recorded messages of A. W. Tozer when I was cueing them for broadcast on Moody Radio. I listened to them countless times during my forty-year career, but for some reason, I failed to pick up on a distinctly different voice when this devoted man of God started praying. One day his prayer at the end of a message jumped out and captured my attention. In that moment, rather than hearing A. W. Tozer talk to his flock about God, I heard his voice become soft and reverent as he talked to God on behalf of those gathered before him.

As I transcribed and compiled these prayers from the original sermon recordings, I was careful to preserve his words with great fidelity. In other words, what you read is actually what Tozer prayed. Readers will immediately notice that he addresses God as Thee and Thou, words we don’t often hear anymore. Sometimes the prayers include quotes or paraphrased fragments of Scripture—I have not tried to give references for these, but the reader will certainly recognize them. In certain places where he names individual church members, I have changed these to brother or sister.

Each chapter starts with short, topical thoughts on prayer that Tozer gave during his Chicago sermons. These additional insights will help the reader better understand the personal thoughts and basis behind the prayer life of A. W. Tozer. All of this material is new, never having been published until now. For interested readers, the exact source of the chapter introductions and prayers is listed at the back of the book.

These are not quick, perfunctory prayers—a few words offered because they are somehow required or expected. Instead, they are deeply honest and heartfelt appeals to the resplendent Majesty on High. A. W. Tozer’s pastoral prayers have the great potential to help a new generation of pastors to develop their intercessory role as the shepherd of the flock. Each pastor stands (figuratively) at the entrance of their sheep gate, seeking protection as well as giving warning to the sheep within its walls.

May the Holy Spirit be pleased to use these printed prayers as a possible model or pattern for all sincere worshipers to consider when they are approaching the Almighty.

Excerpted from Approaching the Almighty: 100 Prayers of A.W. Tozer compiled by Phil Shappard (©2021). Published by Moody Publishers. Used with permission.

Share on FacebookShare on Twitter
From Outreach Magazine  Pursuing Diversity: 3 Advantages of Doing Ministry 'With,' Not 'To'