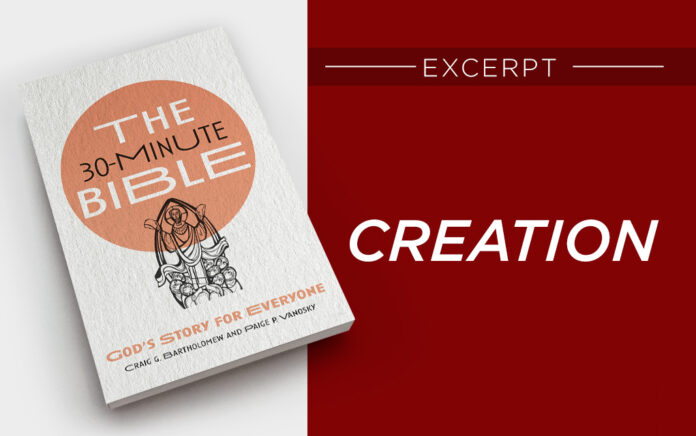 Creation Genesis 1 tells about God’s creation of light and time, of the sky, the oceans, and the earth. God sets up the sun and the moon and the stars in the sky, thereby introducing seasons into our life on earth. Once the three major places on earth are established—the earth, the sky, the seas—God […]

Genesis 1 tells about God’s creation of light and time, of the sky, the oceans, and the earth. God sets up the sun and the moon and the stars in the sky, thereby introducing seasons into our life on earth. Once the three major places on earth are established—the earth, the sky, the seas—God provides inhabitants for each of them: sea creatures for the oceans; birds for the sky; and plants, animals, and humans for the land. At every point of his creative work God contemplates it and declares it “good,” and when he has finished creating the world, he declares it “very good.” It is an astonishing vision of all of life—with all its diversity and wonder—as God’s creation.

The poet Gerard Manley Hopkins speaks of the world as “charged with the grandeur of God,” an expression that captures what it means for the world to be “very good.” Through television programs like Blue Planet, we are becoming aware of the immense variety of sea creatures, all made by God. For those of us who are gardeners or farmers, the wonderful variety of plants and flowers comes from God. For those of us who enjoy gazing at the stars and the planets, all are from God. The Bible opens with the whole of the world in view and declares that it all originates from God.

If, like us, you love art, Genesis 1 is like being taken to the most extraordinary exhibition you have ever seen. But imagine if, even as you are exploring the exhibition with wide eyes, a friend comes up to you and asks, “Would you like to meet the artist?” Of course, your answer would be, “Yes.” This is exactly what the Bible does in its opening chapters. Yes, the creation is wonderful, but even more wonderful is the One who made it, and a major aim of the Bible is to introduce us to the Creator God. What is the Creator like? The opening words begin to provide our answer.

As the Creator, God is, first, royalty par excellence. He is the great King. In the world in which the Old Testament—the first part of the Bible—was written, kings were often thought of as gods and wielded great power. But God’s kingship exceeds all earthly kings. A king’s word might be a command, but God simply says, “Let there be . . .” and that part of creation is ushered into existence. God is all powerful.

Second, some people have a spaceman view of God—he is there but distant and uninvolved in our world. On the contrary, this chapter reveals a God who speaks and sees and ponders his handiwork. Like any good craftsperson, he is deeply interested in what he has made.

Third, God is one; he is the one and only God. In the world in which the Old Testament was written, the nations believed in thousands of different gods, and they had all sorts of stories about them and temples for their worship. The early readers of Genesis 1 would have noticed that when two of these “gods,” the sun and the moon, are created (see Genesis 1:14-19), the Bible deliberately avoids using the words “sun” and “moon,” referring to them instead as “the greater light” (the sun) and “the lesser light” (the moon). Why? To make it quite clear that they are not gods but part of God’s creation with a specific function in his universe. God is the one and only God.

Fourth, God is wonderfully loving and kind. A common view among the ancient nations was that the gods created humans because they were tired of doing all the chores and work, and thus they made humans to serve them as slaves so they could relax and party. In this view the gods are all too human: selfish, lazy, and self-serving, with no real interest in the humans they created. God is completely and gloriously different. He sets up the created world as the ideal home for humankind, as the place in which we can flourish and become fully and wonderfully human, as we will see in the next chapter.

From Outreach Magazine  Boundaries for Your Soul

Having listened to the opening story of the Bible on its own terms, we can see that many of us make the mistake of reading the opening chapters of the Bible with our twenty-first-century questions about science and evolution front and center. These are important questions, but we first need to listen to the powerful message of these chapters before engaging such questions. Although we cannot answer these questions fully here, do note that the opening chapters of the Bible tell us mainly about who created the world rather than how he created it. Rightly understood, there is no conflict between the best science and the Bible. Indeed, the view of the world as creation, and thus as ordered and capable of being known, motivated scientific study—and continues to motivate it, albeit often unconsciously.

As the great twentieth-century Christian writer C. S. Lewis pointed out, “Men became scientific because they expected Law in Nature, and they expected Law in Nature because they believed in a Legislator.” Science looks for order in the creation, and it can only be found because God put it there and created us with minds fitted to explore and discover God’s ways with his world.