Home Resources Books Should You Politicize, Generalize or Personalize? 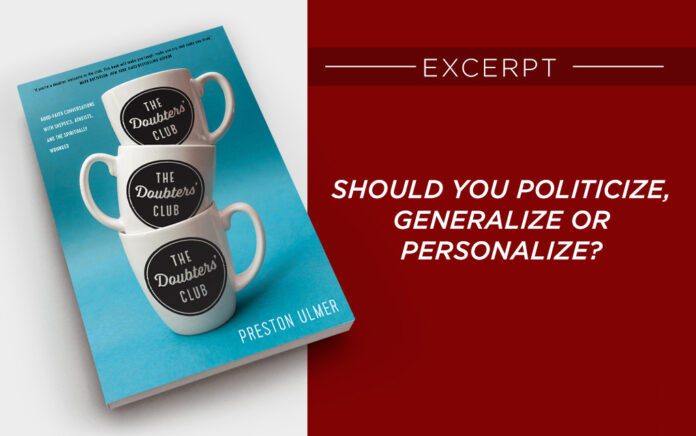 How to Interact with People Who Aren’t Like You

Be it racism, religion, or radical ideologies, we are always faced with one of three options when interacting with people not like us: politicize them, generalize them, or personalize the relationship at hand.

We must not politicize it. The quickest way to suck God’s justice out of a room is by politicizing it. An issue can be so encrusted with so many layers of politicization that we can hardly see a human being on the other side. Politics have certainly charged topics such as poverty and sexuality. What we often forget in the discussion is that issues are always raised by a person or about a person. If we keep people at the heart of the discussion, we will rarely see their unique situation through the eyes of our political party (if we even have one). Paul wrote, “There is neither Jew nor Greek, there is neither slave nor free, there is no male and female” (Galatians 3:28); I think we can rightly echo those words by saying, “There is also neither blue nor red.” People are not bipartisan issues. And this has always been God’s heart, long before he revealed himself in Christ.

When Joshua was by Jericho, he lifted up his eyes and looked, and behold, a man was standing before him with his drawn sword in his hand. And Joshua went to him and said to him, “Are you for us, or for our adversaries?” And he said, “No; but I am the commander of the army of the Lord. Now I have come.” And Joshua fell on his face to the earth and worshiped and said to him, “What does my lord say to his servant?” And the commander of the Lord’s army said to Joshua, “Take off your sandals from your feet, for the place where you are standing is holy.” And Joshua did so.

What a question! “Lord, are you for us, or for our adversaries?”

The question is not what side is God on. The question is whether we are on God’s side. He is a side all by himself. Holy. Distinctly other. Those who are with him are constantly on holy ground. Heaven’s embassy welcomes all who would choose to be part of God’s side. Just take off your shoes on the way in. Let’s keep the dirty politics out of it. People are here. Not politics.

We must not generalize it. No one likes to be lumped with oversimplifications about the issues at hand in order to fit a preferred narrative. People can have thoughts that don’t fit. In fact, if we are going to have any chance at people changing their mind as we pursue truth with them, it will require some level of cognitive dissonance, knowing that some level of inconsistent beliefs or thoughts exist that don’t line up with practice. In the past, this has been the “gotcha” moment for most Christians. We would point out the inconsistency only to back the atheist into a philosophical corner, showing where the person’s stance on a particular idea doesn’t line up with the general confession of their worldview. Should it surprise us that generalizations don’t win others over? Do any of us want to fit the stereotype of our in-group?

When launching the Springfield Doubters’ Club location, a member of the Freethinkers in Springfield (an organization for individuals who don’t subscribe to a particular religion or way of thinking) publicly posted about me. She assumed I was “just like the other Christians in the Bible Belt,” stating that there is never a time Christians can host gatherings with non-Christians without trying to convert the non-Christians. Generally, she is correct. But The Doubters’ Club doesn’t fit into that generalization. After attending The Doubters’ Club meeting, one of the leaders of the Freethinkers group told me that he “found it to be a really good thing.” He continued to attend, and even helped host some of the meetings.

It’s often the case that when you get people talking about issues that matter, many times their thoughts don’t align with their cause. To the strict materialist, love and justice are of the utmost importance, even though those are immaterial concepts. Human dignity is more important than animal rights to an atheist, even though humans should have no more intrinsic worth than animals, according to this worldview. It’s important not to make assumptions about what a person who doesn’t think like you values.

We must personalize the relationship at hand. It’s why I hope the handshake outlives the coronavirus. Dr. Fauci, one of the most prominent voices during the coronavirus pandemic, says the days of handshaking are numbered. “As a society, just forget about shaking hands,” he said. “We don’t need to shake hands. We’ve got to break that custom.”

Some customs need to be preserved, Dr. Fauci.

There is something profoundly symbolic about two hands joining as the first interaction we have with someone we don’t know. We acknowledge unity before we engage with our differences. Personalizing the relationship really means we are willing to listen to their story, carry their burdens, and help them find freedom from the pressure they feel in life.

Excerpted from The Doubters’ Club: Good-Faith Conversations with Skeptics, Atheists, and the Spiritually Wounded  by Preston Ulmer. Copyright ©2021. Used by permission of NavPress. All rights reserved. Represented by Tyndale House Publishers, a Division of Tyndale House Ministries.