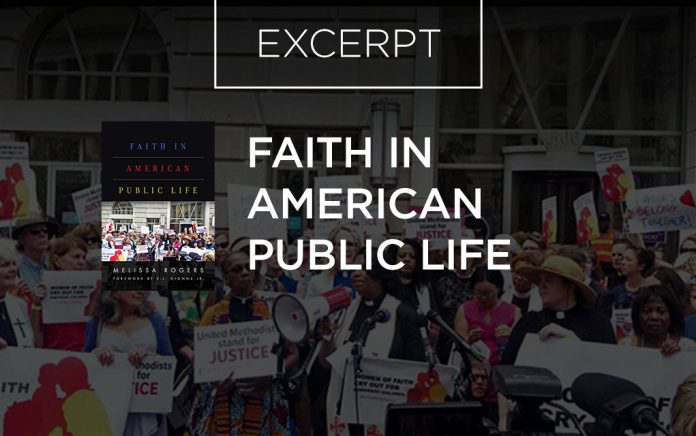 Excerpted From
Faith in American Public Life
By Melissa Rogers

When Pope Francis accepted President Obama’s invitation to visit the United States, the president provided clear instructions to his staff: The visit should not be simply a moment in time or a photo op. Instead, President Obama wanted the visit to have lasting value. He asked his staff to identify specific steps the U.S. government could take, both on its own and with others, to advance some of the values he and Pope Francis share.

President Obama’s charge launched a series of consultations. White House staff traveled to the Vatican to meet with leaders there and began conversations with religious and humanitarian groups in the United States about the visit. External meetings were matched by internal ones. Staff throughout the Obama administration met regularly to consider goals that were ambitious yet feasible, and the president and senior advisors reviewed plans for the visit as they took shape.

Three ethical and policy pillars emerged from these conversations. The first pillar was the imperative to stand in solidarity with people in crisis, including refugees and persecuted religious minorities. The second pillar was promoting sustainable development, including advancing an agenda to end extreme poverty, expand peace and encourage good governance. The third pillar was protecting our “common home,” as Pope Francis said in his 2015 encyclical—to be good stewards of the earth and its resources.

To further these goals, the Obama administration significantly elevated the number of refugees the United States could accept, without cutting any corners on the rigorous security checks each refugee undergoes before entering the country. Religious and humanitarian organizations asked the Obama administration to raise the ceiling for refugees, and they then helped the U.S. government reach those goals.

To promote religious freedom, the administration created a new post at the State Department to advocate for religious minorities in the Near East and South and Central Asia. Training for diplomats on religious liberty was expanded, and a new civil society conference was launched to stand “for the universal right of all people to practice their faiths in peace and in freedom.”

In consultation with faith-based and humanitarian groups, the United States Agency for International Development (USAID) issued a plan for ending extreme poverty. As a complement to policy initiatives such as the Climate Action and Clean Power Plans, the Obama administration formed an array of partnerships with religious and community groups to promote climate resiliency at home and abroad.

From Outreach Magazine  A Love That Transcends Rejection

On September 23, 2015, the White House announced these and other steps, and an estimated crowd of 11,000 gathered on the South Lawn to join President Obama in welcoming Pope Francis to the United States.

Participants included people of many different faiths and none, all of whom rose before dawn in order to clear security in time for the celebration. The ceremony began at 9:32 a.m., shortly after Pope Francis’ black Fiat zipped onto the South Lawn. When the arrival ceremony ended and President Obama escorted Pope Francis off the stage, someone yelled, “We love you, Pope Francis!” The crowd broke into laughter and applause. And long after Pope Francis left the White House, the work on shared values continued.

This collaboration involving the U.S. government, the Vatican and religious and other civil society organizations is one high-profile example of how faith communities and government can work together to promote the common good. Our Constitution rightly recognizes that religion can play a prominent role in American public life, including through cooperation with government.

Religious communities serve their neighbors, sometimes by partnering with the state. People of faith gather in public parks and on sidewalks and streets for demonstrations and devotional events. Voices of the faithful are heard in workplaces and public schools. Homeowners and houses of worship place religious signs and symbols on their front lawns.

Faith is visible, vital and vocal in the United States. According to the Pew Research Center, “Americans pray more often, are more likely to attend weekly religious services and ascribe higher importance to faith in their lives than adults in other wealthy, Western democracies, such as Canada, Australia and most European states.”

While the Constitution prohibits government-backed religion, it protects the rights of religious individuals and organizations to promote their faith. And rather than undermining faith, the limits the Constitution places on government’s involvement in religion help to preserve faith’s integrity and influence. The bar on governmental promotion of faith assists religious communities in retaining control over their messages, thus helping to ensure their authenticity. When religious communities are independent and authentic, they can be credible and influential.

Prohibiting government-backed religion, while protecting the rights of individuals and organizations to promote their faith; barring governmental preferences for particular religions, while welcoming collaboration with people of all faiths and none for the common good—principles like these have made the United States exceptional.

This book describes these and other principles that define the relationship between government and religion and offers recommendations for observing them in various sectors of American public life. The legal rules of the United States are not perfect, nor have they been perfectly applied. The American legal framework, however, has produced remarkable freedom. This framework has helped to create a country in which people of many different faiths and beliefs live together peacefully and often cooperatively, and where religion can be a powerful force for good in society.

From Outreach Magazine  Face-to-Face With the God of Secularism

Special attention is given to the role of policymakers. Members of the legislative and executive branches must carry out constitutional commands, including religious liberty guarantees. The relationship between religion and government is as important as any other legal or policy issue, yet policymakers often do not have the training, much less staffing plans, to address them. Further, government officials often adopt one of two faulty approaches to religion-related issues: They either give scant attention to these issues, hoping they can mostly be avoided; or they pay close attention but only consult with and respond to those with shared ideological or religious perspectives. Both approaches must change.

This book also warns about certain contemporary threats to religious freedom and pluralism in the United States. The most serious and urgent threat includes hostility against and attacks on religious minorities in this country. Some political leaders—most prominently, the current president of the United States—are willing to engage in fear-mongering on factors like religion, race and ethnicity and to use dehumanizing language and violent rhetoric or imagery in attempts to defeat opponents and silence critics. Given current polarization, such tactics amount to throwing a lit match on dry kindling. Americans must take action now to counter these threats.

Other contemporary challenges to religious freedom include a dangerous mix: overreaching on free exercise issues coupled with efforts to shrink the constitutional prohibition on government advancement of religion. The answer to this challenge is not to do the opposite—undervalue religious exercise and inflate the Establishment Clause. Neither is protecting only religious practices we like, which is a danger on all sides. Each of these concerns must be taken seriously, and this book offers suggestions for doing so.