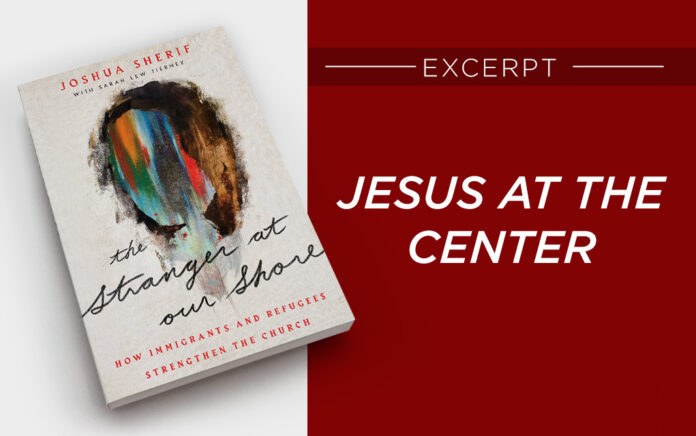 Who is informing your view of immigrants and people of other faiths?

The Stranger at Our Shore

Jesus at the Center

How are Christians portrayed in the media and pop culture? In a good light or a bad one? Most Christians would say the worst aspects of Christianity are often the ones highlighted, not the best.

Do you think it’s possible that this same trend could be happening to other people groups too? Is it possible that a Muslim person would not want you to get your view of Islam from the news, in the same exact way that you would not want people to judge all Christians based on negative stereotypes in popular TV shows?

So consider for a moment: Who is informing your view of immigrants and people of other faiths? Is it Jesus? Is it your immigrant friends? Or is it the news, a website, or a TV show? If you find yourself with strong feelings against a certain people group— and you don’t have a single friend from that people group—then consider the source of your information.

A while back I taught a class about Islam in a church setting. There was a student in the class who knew all the facts about this religion, having gathered much knowledge through various media resources—he was clearly the most informed student on this topic in the entire class. But I could tell, he was filled with hate toward Muslim people. This man could recite the knowledge, but lacked the relationships. When I teach occasional classes on Islam, my goal is not to make people into cultural experts. We need fewer experts and more followers of Jesus. Less focus on the facts (though facts are important, of course!), more focus on the friendships.

Just think for a moment about the sheer number of different Christian denominations. There is a wide variety of beliefs and practices under this big umbrella of Christianity. The large majority of Americans identify as “Christian”—even though many of them are actually more deistic, agnostic, and nominal in their faith. This is exactly the same for Muslims. Not all of them are Middle Eastern. They come from every country and possess a wide variety of customs. Just like nominal Christians, an enormous number of people who consider themselves “Muslim” are Islamic by heritage only and do not actively practice their faith at all.

Right now, some of you are thinking, “Okay, but what about extremism? What about Sharia Law?”

Sharia Law is deeply concerning. I don’t appreciate it, and I would never want it. But people motivated by their religious convictions often believe others should live by the same values. This is what all humans do. Christians consistently vote their specific Christian values, not just broader social values—because they believe they are voting for truth, that their vote would please God, that their morality would be best for the world. And yet, nonreligious people look at Christians and say their voting perspective is regressive, dangerous, fundamentalist, ignorant, backward, and incompatible with the Constitution. So we must see that this is not exclusively a “Muslim thing” to vote your conscience—even if we disagree strongly—this is a broader human thing.

Sometimes urban churches are critiqued for being too liberal or morally lax when it comes to political issues, such as immigration for example. I believe this trend naturally arises from the diversity found in some urban areas. For example, when a Christian living in my neighborhood thinks of a Muslim, it’s more likely they would think of their actual neighbors or the family that owns a local business they frequent—not a Middle Eastern extremist on the news. As I write this, I currently have neighbors from Morocco. I think if you had my neighbors, you would love them as much as I do. You would understand the plight of Muslim immigrants in this country in a different way after playing with their kids and hearing their stories and learning more about their customs. You would find any feelings of fear or hatred melting into feelings of compassion. People who have any lived experience with immigrants understand they are simply human beings like us, who want the same things we do—safety for their kids, a place to call home, food on the table, and good relationships.

When we prioritize real-life, individual friendships over the facts we glean from the news or the internet, we might discover we have much more in common with the stranger than we first thought.

Christians tend to move toward one of two extremes when it comes to culture. Some churches reject culture or even fear culture, to the point that they disengage, isolate, and often appear bizarre and irrelevant to the majority of the “mainstream” world. On the other hand, I have seen some churches pander to and even obsess about culture, especially the whims of “popular” culture. Perhaps the heart intentions of both kinds of churches are well-meaning, but the extreme reactions are still not helpful, as both approaches lead to further division.

So, how do we find balance? After all, we cannot simply ignore people’s culture when we seek to build relationships with them—as this is such an intimate part of their personal story—but neither can we make church culture-centric, basing our practices around something so transient. Church must be Jesus centered. Culture is not the king here. Jesus is the King. So how do we know when we’re drifting too far toward either extreme? Christians are certainly called to look different from the world, but have we rejected or demonized the culture so much that we have completely isolated ourselves from people in our community who need God? On the other hand, culture certainly has a place in our lives, but have we catered to culture so much that most people in our church look like us, talk like us, and believe like we do? Have our gatherings turned into echo chambers?

Sunday morning sadly continues to be the most segregated hour in America. Reflect on your own church—who is missing from the family? Are there people groups who reside in your community that are not represented in your church? And not just in your church, but in your church leadership?

Engaging someone else’s culture does not mean we have to adopt their culture. We don’t have to agree with their culture. We don’t have to learn everything there is to know about their culture. But neither should we ignore, discount, or fear their culture! We must strike a balance: be respectful, show appreciation, ask polite questions, extend invitations. Most of us would want immigrants to take the same approach—we would not want them to feel afraid to ask questions or to attend our traditional cultural events. But we would also not be expecting them to automatically start speaking with our particular accent or start listing all the historical facts they know about our country, as this would seem forced and even foolish. Let’s be learners—let’s be students of culture, but avoid getting stuck there. Culture can provide the setting and the context, but it’s not the main point of the story.

Jesus is the main point. And we must move a family model, with Jesus at the very center.

Excerpted from The Stranger at Our Shore: How Immigrants and Refugees Strengthen the Church by Joshua Sherif (© 2022). Published by Moody Publishers. Used by permission.