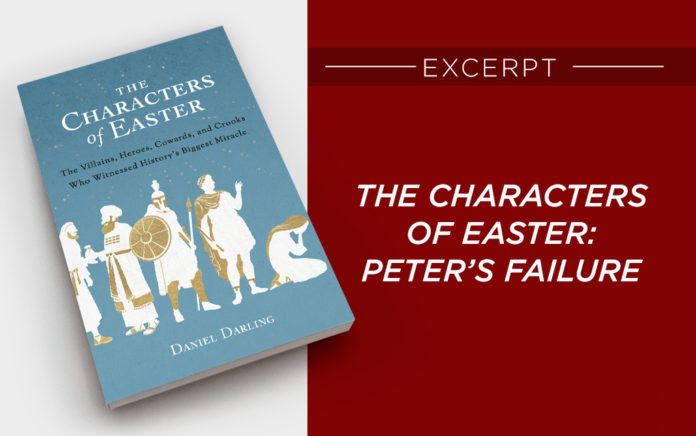 Excerpted from ‘The Characters of Easter’ (Moody)

Excerpted From
The Characters of Easter
By Daniel Darling

You can’t tell the Easter story without talking about Peter’s stunning denial. The gospels all record their versions of this story, but Luke, the meticulous journalist, records a particularly haunting detail: Somehow Peter was within eyeshot of Jesus. “Then the Lord turned and looked at Peter” (Luke 22:61). You can just read the hurt and ache in those words. The eye contact, the look of anguish on Jesus’ face, the despair roiling now through Peter’s heart. This once-proud, self-assured young man was fully and unreservedly broken. Luke later records that he “went out and wept bitterly” (Luke 22:62).

Have you ever had a moment when you wept bitterly? I have. A genuine confrontation with the cross of Christ will do this, exposing our pride and self-sufficiency, the sin that blackens our souls. Whether you approach Jesus with a record of accomplishment and a life of charity or you shuffle forward with halting steps and a life of shame, Calvary will break you, and yet it will lift you up.

And so we shouldn’t see this as Peter’s end, but the beginning of his life’s work. Peter’s failure here was not one of cowardice, but of pride. He had loyally stayed by Jesus’ side far longer while others fled. Peter’s failure was his inability to fully see himself. When Peter looked in the mirror every morning, he saw a strong, successful, brave warrior, but Jesus’ piercing look that dark night revealed the real man: a weak and frail disciple.

The world would one day see a courageous Peter, resisting the government and boldly preaching the gospel to thousands. But it would be a different kind of courage, one that he would later define as truth wrapped in gentleness and kindness and buoyed not by own self-assurance, but the “living hope” of the resurrection of Jesus Christ (1 Peter 1:3). Peter would live the rest of his life with humility. That rooster crow he heard on the night of his denial? That was a common sound in the cacophony of daily life in Israel. So imagine every sunrise after that fateful day, he’d be reminded of his failure. Like God’s best servants, Peter would walk with a limp; he’d bear the scars of past failure. This is the same journey toward leadership we see throughout the Scriptures: Abraham had Ishmael, Jacob had a hollowed-out thigh bone, Moses a stutter, Paul a mysterious thorn in the flesh. We have to come to understand that our scars are not marks to be ashamed of, but gifts from God that remind us, daily, of our weaknesses.

From Outreach Magazine  What Is Your Evangelism Question?

This is hard for us to comprehend in a culture that continually tells us we are strong. We are catechized by inspirational mumbo-jumbo: you are strong, you are brave, you’ve got this. But real strength is found not in summoning some illusion of inner machismo. Instead, we, like Peter, need to be broken in order to be brave.

Peter’s dramatic fall was the beginning of his rise. And we only know about the denial and the rooster crowing because Peter himself shared it. Nobody else from the inner circle was with him in the courtyard, by the fire, and outside the high priest’s house. We can only read about it in the gospels because Peter must have shared it, over and over again, with audiences large and small until it became such a part of the eyewitness narratives that later became the gospels and inspired canon of Scripture. What’s more, if Mark was the first gospel written, as many scholars believe, then this means Peter intended for God’s people to see him at his worst moment.

We can only wonder how many thousands, perhaps millions, have converted to Christianity because this Apostle cut open his heart and shared his most vulnerable moment. Only heaven knows. So maybe it’s time we stop looking at Peter as a foolish coward and instead see in this man an example of Christ’s transformative gospel work. Peter’s response to his sin, in contrast to that of the sad tale of Judas, is a study in true repentance. Like David’s transparent confession in Psalm 51, we find no justifications, obfuscations, or anger. We just see a once proud, self-confident man reduced to a mess of tears. This is why Jesus would name him “the rock,” not because he was bursting with bravado, but because of a tender, contrite heart.

From Outreach Magazine  Pastors Value Denominations Now, Not as Sure About the Future

Most importantly, Peter’s denial shows us something about the Savior. Jesus, at a moment of extreme agony and personal shame, turned and looked with compassion at His friend who was at that moment sinning against Him. “While we were still sinners, Christ died for us” (Rom. 5:8). He didn’t go to the cross for perfect, whole people. He died for the sick and the broken. He died for you and me.

Jesus, while predicting Peter’s demise, also quietly said the words, “When you have turned back, strengthen your brothers.” When you have turned back. Jesus saw through Peter’s failures and toward his future as an apostle. This is a word for Christians: The way to personal peace is through repentance and the way to restoration is to look at your Savior who has not turned away from you but has fresh reservoirs of grace.

And so it is, in this generation, God is calling flawed, broken, repentant people for his mission in the world.

Excerpted from The Characters of Easter by Daniel Darling (Moody Publishers). Used by permission.