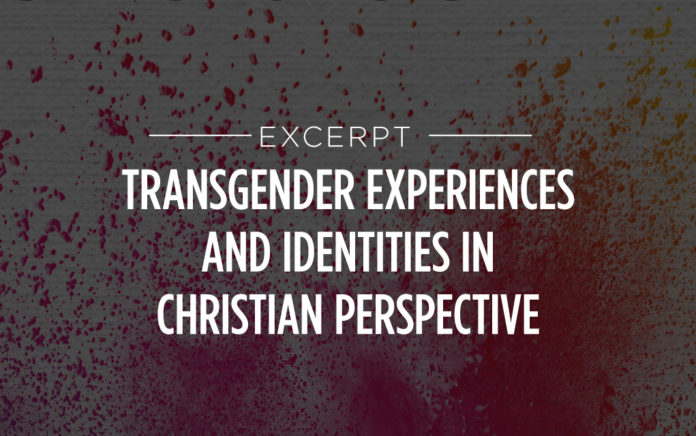 Even when we deeply disagree, there is much hope for fruitful dialogue.

At the outset, some might be inclined to think that this conversation is destined to be something less than fruitful. On the one hand, some researchers have suggested that transgender people, along with others in the LGBT community, generally show a “relative disinterest” in things religious. On the other hand, many have pointed out that Christian—especially conservative Christian—responses to transgender experiences have often come across as demeaning and even hateful. Beyond this, Christian infighting about sexuality in general—and about aspects like homosexuality and transgender experience in particular—often dominates the media today. In light of these dynamics, one might wonder what good can really come from a consideration of transgender experience in light of a Christian worldview.

Contrary to common sentiments, we want to suggest that there is good reason to be hopeful about the possibility of a fruitful engagement between differing Christian perspectives on transgender experience. While it is no doubt the case that many within the transgender community have become disenchanted with religion, it is also true that a significant sector of this community takes religion—including Christianity—very seriously. For these folks, there is often a struggle to make sense of their transgender experience in light of their religious faith, a process that therapists and clergy are often called on to assist with. And yet, even as religious faith can pose a challenge, it can also bring great insight, strength and comfort. Using data from a large-scale Pew Research Center survey of U.S. LGBT adults, a 2017 study found that “religious affiliation is a significant predictor of LGBT individuals’ happiness.” And, again, while there are certainly instances of bitter controversy between Christians about matters of sexuality, there are also wonderful examples of respectful dialogue even in the midst of serious disagreement.

Given the current state of the culture war, one could easily assume that, while there may be a place of welcome for transgender people within the liberal or progressive quarters of the church, no such place exists within more conservative traditional forms of Christianity. But even here, things are more complex than one might expect. It is true that religiosity and conservatism have often been correlated with more negative attitudes toward transgender identity.

From Outreach Magazine  BLESS: A 5-Step Path to Relational Evangelism

Conservative Christians—Protestant, Catholic and Eastern Orthodox alike—have raised many critical questions and concerns about the way contemporary Western culture approaches issues of sexuality, including transgender experience. For this sector of Christianity, voicing these questions and criticisms is a matter of pursuing faithfulness to the divinely inspired biblical vision of sexuality and to the centuries of wisdom contained in the Christian tradition. It is important to note here that the critiques of transgender identity put forward by a number of conservative Christians are explicitly not directed at transgender persons. Rather, they are focused on particular interpretations of the transgender experience and the philosophical assumptions that fuel them.

That is to say, conservative Christian critiques are often calling into question what some have referred to as a “transgender ideology,” an interpretation of transgender experience forged among elite intelligentsia of the Western academy and fueled by the fires of late 20th-century postmodern philosophy, particularly queer theory. It is this particular interpretation of transgender experience—not necessarily transgender persons themselves—that many perceive to be fundamentally at odds with traditional Christian understandings of God, humanity and sexuality. It is also worth noting that Christians who critique queer theory’s role in the contemporary transgender narrative are raising some of the same probing questions that the queer-critical sector of the transgender activist community has, albeit for different reasons.

With regard to evangelical Christians in particular, a 2016 survey found that self-identified evangelicals are “almost twice as likely (61%) as non-evangelicals (32%) to say using surgery or hormones to change birth gender is morally wrong.” At the same time, however, another recent study found that evangelicals generally “displayed overwhelming endorsement of the fundamental value of transgender persons.”

In turning to the question of the perception of evangelical Christians among those within the transgender community, they are commonly seen as a prime source of hatred and attack. This observation makes all the more surprising the results of the 2017 study, mentioned above, on religiosity and LGBT persons’ happiness. One of its unexpected findings is that the highest levels of happiness were reported by LGBT persons within evangelical and mainline Protestant churches (there were “no significant differences” between these two groups), while lower reported happiness was found among LGBT persons identifying as Catholic, agnostic, atheist and religiously unaffiliated.

John Kilner has recently commented on “the huge importance of many ethical debates today, together with the seeming impossibility of resolving those disputes.” But he goes on to make a significant observation: “Opposing ‘sides’ in so many disagreements argue that people matter—that how people are viewed and treated is crucially important. … If people have that much in common, then the opportunity for fruitful discussion is great.” If any worldview should place the conviction that people truly do matter at the center of its value system, it should be the Christian faith—the founder of which placed other-oriented, self-sacrificial agape-love as his first and foremost commandment (e.g., Matt. 5:38–48; 22:36–40).

How to Go the Distance in Ministry

Will Mancini: Designing the Life That God Dreamed for You

How Failure Changed Me Forever