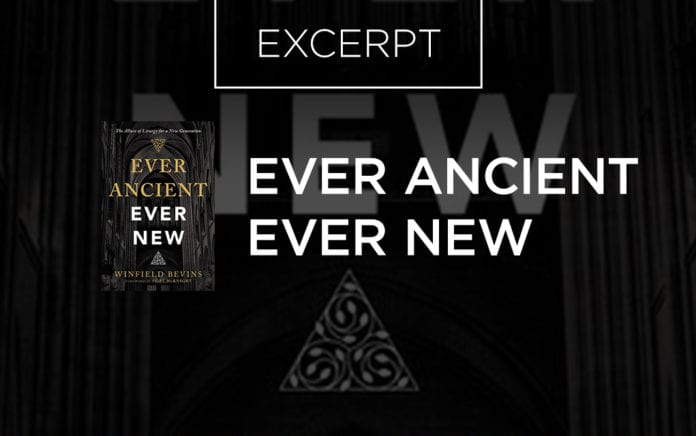 Tracking the cultural forces that are shaping the worldview of the next generation.

Excerpted From
Ever Ancient, Ever New
By Winfield Bevins

Everyone loves a good story. Story relates truth by painting a world and then drawing the reader into its landscape. There is something captivating about a good story, and all the truly good stories echo the One Great Story, the Bible’s story of God’s redemptive plan for humankind throughout the ages. God is the great storyteller, and history is one grand narrative of God’s redemptive love for lost humanity.

Think about the books and movies you’ve enjoyed and loved. How have they influenced your desires and thoughts? It’s likely they presented the narrative in a way that invited you, the reader or viewer, to inhabit the story. Think of John Bunyan’s Pilgrim’s Progress or J.R.R. Tolkien’s Lord of the Rings series. Stories like these remind us that a good story does more than convey information; it forms a relationship with the reader. As we journey through this book together, I’ve included stories and quotes from people who have been formed by the historic practices and liturgy of the Christian church. My hope is that their stories will resonate with your own journey as a follower of Christ in a way that reveals the allure of liturgy for every generation. So as we begin this first chapter, I want to begin with a question: What does it mean to rediscover the wonder and beauty of liturgy?

Let’s begin with a few stories from some of the young adults I’ve met.

Stories of Experience and of Change

Rick is twenty-seven years old. He was raised in a conservative evangelical church, and he learned to sing traditional hymns and memorized dozens of Bible verses as a child. He spent much of his youth at church, always there “whenever the doors were open.” As he grew older, Rick began to feel that his church was too rigid, that it might be hindering him from experiencing the fullness of the Christian life. He looked for answers in the verses he had memorized, quoting them to himself, hoping these isolated verses would give him the fullness of life he wanted. Eventually Rick grew weary and left his childhood tradition to explore a more charismatic church for several years. There he encountered the gifts of the Spirit and began to thrive—until the newness of the experience wore off.

Even after these experiences, at the end of the day Rick felt that something was still missing. He couldn’t articulate what that missing piece was; he simply felt incomplete. Having been raised with a solid doctrinal foundation, he had developed a keen respect for the Scriptures and he’d had vibrant spiritual experiences, but he still felt that there had to be something more. In a last attempt to find what was missing (and at the risk of alienating himself from his evangelical background), Rick began attending a Roman Catholic Church. Unexpectedly, he found himself at home in the liturgically infused services. He’d always heard from others how boring and dry “those Catholic services” were, but when he experienced them for himself, he found he was overcome by the beauty of the ancient forms and rhythms. It was foreign, yet oddly, it felt like what he’d been searching for. Rick began attending the church regularly and realized he had found his home in the Catholic tradition.

Jennifer was raised in a liberal Methodist church where she was taught the importance of social justice, sacrificial service and helping the less fortunate. Her upbringing focused less on the gospel or the teachings of the Bible and instead emphasized the outworking of its social implications. Like Rick, Jennifer began to feel that something was missing in her faith. Looking for a spiritual experience outside of her comfort zone, Jennifer attended a Pentecostal congregation where she experienced a powerful “baptism of the Spirit.” When this happened, her faith became something personal, coming alive in a way it never had before. However, after a few years in this church, she left in search of something more. Today, Jennifer attends a rural Episcopal church, where she was recently confirmed as a member.

The journeys of Jennifer and Rick began on different ends of the spectrum, yet they end in similar places. I see their spiritual journeys as more than a coincidence. As I’ve observed in interviews with people from a variety of backgrounds across the country, Jennifer and Rick’s stories represent a larger movement of young adults who are looking to fill a void in their faith journey. Their search has led them to explore different streams of Christianity, and many of them have found their home in more liturgical expressions of the Christian faith.

But what lies behind this movement? Why are young people from different ecclesial backgrounds embracing liturgical streams of the faith? I began exploring this question by focusing on another question: What did these young adults feel they were missing in the church backgrounds in which they were raised?

The Source of Cultural Shift

To understand why individuals are engaging this journey toward liturgy, we must begin by looking at the cultural shifts happening in North America. Many of postmodernity’s ideals play an important role in how people think about their faith and what they feel is “missing” from their existing tradition. In many ways, the churches these young adults have abandoned represent holdovers from the modern era, locked in a way of being and doing church that no longer speaks to the felt needs of a new generation. Derived from the Latin root meaning “now,” “modernity” refers to a historical and social period that focused on individualism and human freedom, and which emphasized social, scientific and technological progress. The Age of Modernity can be nicely summed up by the words of René Descartes, the father of modern reason: “I think, therefore I am.”

Though the outworking of cultural shifts took centuries to unfold, the effects of modernity were catastrophic for the church. The rise of modernity was accompanied by a rejection of historical religious values and religious life in favor of the newest ideas, philosophies that elevated the human mind as the supreme source of knowledge. If a person couldn’t prove an idea through the empirical scientific method, then it was no longer considered true knowledge. An emphasis on reason, logic and the materialist worldview of scientism led to a denial of the supernatural nature of Christianity. Many people began to doubt the history of Christianity because not everything taught in the Bible could be proven scientifically.

The modern era also helped give rise to the Industrial Revolution, which valued progress, efficiency and pragmatism. In all of this, the church was profoundly influenced by the values of the culture, and Christianity began to lose its emphasis on holistic spirituality, embracing pragmatism and progress. As a result, our culture began to focus on the present rather than looking to the past for wisdom and continuity.

Churches in North America began to define success by measuring growth, emphasizing size and numbers over traditional signs of spiritual fruitfulness and biblical holiness. In the 1990s, many churches embraced business and marketing strategies to help them grow larger. They developed slick, well-executed programming to boost attendance, and in an effort to reach young people, churches turned their youth rooms into concert halls. They used games, gimmicks and gadgets in order to be relevant and cool in hopes of attracting youth. Commenting on this trend, Jason Brian Santos says, “Many of our larger churches have become mini-malls, hosting coffee shops, bookstores and hair salons.” But were they successful? The end result of attempts to “woo” the world with the world’s ways has produced a generation of consumers—individuals who sit in the driver’s seat and dictate what and how the church should meet their needs—rather than radically committed disciples of Jesus Christ. The product of centuries of individualism combined with a turn toward the successful pragmatism of American business practices, consumer Christianity sees the church as a place of goods and services rather than a place of growth, service, giving and going back into the world through mission.

Many young people today are not interested in a church that provides a slightly different version of what the world can give them. If the church is just another vendor of services—not even a good one in some cases—what does it have that they cannot get elsewhere?

Young adults are rejecting the modern church in growing numbers, and one reason is that they have grown up in a transitional society and have a different worldview from Christians of previous generations. The church of the modern age was addicted to progress and growth, but it is now crumbling. What was flashy and new a generation ago feels stale and tired today. And the search for the newer and better version of Christianity is a never-ending merry-go-round. A new world is emerging, one futurists, theologians and philosophers call the age of postmodernism.

In his book Soul Tsunami: Sink or Swim in the New Millennium Culture, Leonard Sweet writes, “The seismic events that have happened in the aftermath of the postmodern earthquake have generated tidal waves that have created a whole new world out there.” The postmodern movement was birthed in the philosophical musings of the mid-twentieth century and gradually marked a shift from the Industrial Age to the “Age of Information.”

While modernity can be characterized as scientific, rational and pragmatic, postmodernity can be described as experiential, spiritual and communal. The paradigm shifts resulting from the transition from modernity to postmodernity that we are witnessing today can be comparable to previous shifts like the shift from Renaissance to Reformation or the advent of the Age of Reason.

As I mentioned in the introduction, we have been hearing alarming statistics for years about the steady flow of young people leaving the church in North America. According to the Pew Research Center, around one-third of young adults claim they have no religious affiliation. Often called the “nones” because of their disavowal of organized forms of religion, they are currently the third largest religious group. If trends continue at the current rate, “nones” and other religions combined will outnumber Christians in America by 2024. These are sobering statistics, indicating that massive cultural shifts are on the horizon for today’s church.

We can blame these larger cultural shifts for the exodus of young people from the church, but we must also look to the culture to understand the values that are leading them away. In many ways, the lives of young adults—what they love, seek and desire—have been shaped by the growth of technology, media, the global rise of terrorism and shifting ideas about human sexuality and personal identity. These issues and many more are contributing to a growing skepticism about religious claims. While young adults will speak of being spiritual and spiritually interested, by and large they tend to distrust organized religion.

Excerpted from Ever Ancient, Ever New: The Allure of Liturgy for a New Generation by Winfield Bevins. For more information visit EverAncientEverNewBook.com.