Home Resources Books Give Everything You’ve Got to Peacemaking 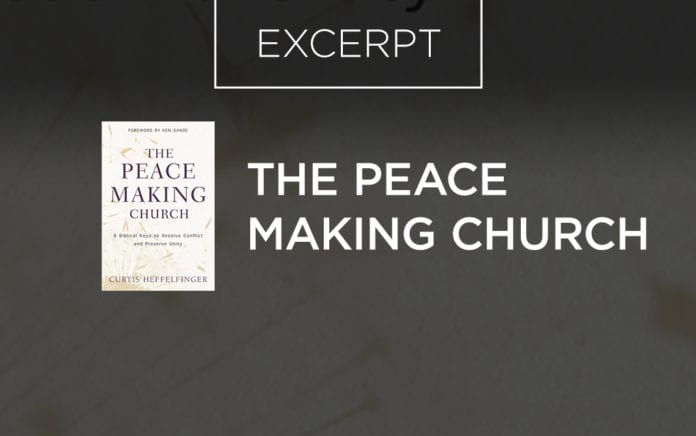 Paul calls us to be tenacious about being peacemakers and maintaining unity in the body of Christ.

Excerpted From
The Peace Making Church
By Curtis Heffelfinger

Our Best and Nothing Less

Most of us do not just bump into greatness every day. I will never forget one of the rare times I literally did. It happened on a Saturday afternoon at the Norfolk airport. Late for a flight, I hurried into the check-in line. In my haste, I nearly bounced off the 6ʹ7ʺ figure waiting his turn in front of me. As he did a 180 to see who had gotten too close for comfort, I immediately began to beg forgiveness for my clumsiness. But I stopped mid-apology when it dawned on me that I was having a close encounter of the celebrity kind. “Hey, Dr. J!,” I said. That’s right. I stood face-to-face—or face-to-chest, I should say—with the Julius Erving, NBA legend and Hall of Famer, otherwise known in basketball lore as “The Doctor.”

“Hello,” he replied, smiling warmly. I proceeded to tell him what a huge fan I was. Now, those of you with admiration for other pro-ball greats and affinity for their teams, please indulge me for a bit. Born and raised in southeast Pennsylvania, I waited a long time for the 76ers to win an NBA title. So when my team finally broke through with a four-game sweep of the perennial champion LA Lakers in the 1982–83 season, I couldn’t have been more thrilled. Now, I know the good doctor didn’t do it all by himself. A gifted cast of teammates contributed to the success of that memorable season. But few basketball aficionados would dispute that Julius Erving led the way to the only Larry O’Brien trophy in Philadelphia history. I wanted Dr. J to know just how grateful I was to him for making that possible. I scored his autograph (for my sons, of course), and off we went to the gate. I could hardly believe what had just happened.

No doubt about it, I credit Julius Erving for his extraordinary contribution to my team’s place in the NBA record books. But the man commands my admiration and that of many others for another reason, a more compelling one, at least in terms of what I do for a living. They called Julius Erving “Dr. J,” or “The Doctor,” for good reason. Any basketball lover from that generation knows why. All you had to do was watch him “operate” on the court. From his patented finger-roll touch to his soaring flight from the top of the key to throwing down a thunderous dunk, Number 6 made folks gasp with awe by the way he performed round-ball surgery on his opponents. Whether history’s best or not (I too have heard of Michael Jordan, Magic Johnson, Larry Bird, LeBron James, and Steph Curry, just to name a few), Dr. J belongs in the category of all-time greats who did it better than most and belong to a league apart from the rest.

Now, nobody cares in the least how well I do or do not perform on a basketball court. That’s a good thing. I have never been much of an athlete. But every member of my church cares greatly about how I do in the pulpit as their lead pastor. My job description in that role at Orlando Grace Church includes a number of responsibilities, but none more important than preaching God’s Word every Sunday. It matters greatly to me that I approach my vocation as a teacher of the Bible for God’s people with something of the devotion and excellence exhibited by the likes of an All-Star athlete in his vocation.

Furthermore, I really don’t have any choice in the matter. I’ve got to go hard after excellence in my realm for multiple reasons. The apostle Paul spelled out the most obvious of those in 2 Timothy 2:15. Speaking to his young pastoral protégé serving the church at Ephesus, he urged: “Do your best to present yourself to God as one approved, a worker who has no need to be ashamed, rightly handling the word of truth.” Do your best. Here’s how this pastor feels the weight of those words every time he reads them:

“Hold nothing back. Give your all. Study hard. Wrestle with the text. Spend the time. Labor super well. Pay the price in blood, sweat, and tears during sermon prep to ensure you get the meaning spot-on. Be the best you can be at this preaching thing. After all, ultimately it’s God’s ‘Well done, good and faithful servant’ approval you seek to receive more than anything else. Or it should be. No way you want to cut corners here as a pastor, that’s for sure. Shame on you if you do!”

Bible verses like these can keep preachers like me awake at night. We wonder if we are coming anywhere close to what God requires, given a bar set so high. My fellow pastors reading this will likely identify. But what does that have to do with everyone else hanging in there with me thus far?

Here’s my point. God’s Word tells not just pastors but all believers many things we must do for Jesus in light of who we are in Jesus. But, as with pastors in their unique role, the Bible charges all believers with a select list of responsibilities subject to a “be the best we can be, give our all, go all-out” kind of devotion. We don’t want to be ashamed in the least about these crucial matters. One of those responsibilities in particular for every church- going follower of Jesus gets a lot of Bible press. I’m talking about peacemaking. The Scriptures make this very clear in numerous places. Perhaps Ephesians 4:1–6 says it most thoroughly:

“I therefore, a prisoner for the Lord, urge you to walk in a manner worthy of the calling to which you have been called, with all humility and gentleness, with patience, bearing with one another in love, eager to maintain the unity of the Spirit in the bond of peace. There is one body and one Spirit—just as you were called to the one hope that belongs to your call—one Lord, one faith, one baptism, one God and Father of all, who is over all and through all and in all.”

Camp out with me for a moment on that word eager in verse 3. Paul argues that a life gripped by the gospel of Jesus will, among other things, demonstrate itself in an eagerness for keeping the peace in the body of Christ. The word for eager in the original text is the same word translated “do your best” in 2 Timothy 2:15. It shows up again in 2 Peter 1:5–7, translated a bit differently but conveying a similar idea, included in a list of highly desirable virtues in a believer’s life:

From Outreach Magazine  The Real Meaning of the Most Viral Verse

Be eager. Do your best. Make every effort. These are multiple ways of saying virtually the same thing. They all capture the verb’s urgency regardless of the subject under consideration. The Greek word comes from a root that means to run or make haste, to hurry about something. It communicates the idea of speed, urgency, energy—a vigorous pursuit of something. Theologian Markus Barth nailed it with his assessment of this word, so important to each of these contexts:

“It is hardly possible to render exactly the urgency contained in the underlying Greek verb. Not only haste and passion, but a full effort of the whole man is meant, involving his will, sentiment, reason, physical strength and total attitude. The imperative mood of the participle found in the Greek text excludes passivity, quietism, a wait-and-see attitude, or a diligence tempered by all deliberate speed. Yours is the initiative! Do it now! Mean it! You are to do it! I mean it!—such are the overtones in verse 3.”

Paul commands that this is the way we should regard the call to peacemaking for unity’s sake in the body of Christ. Allow me to pile on the emphasis with a few more imperatives in the New Testament.

“Strive for peace with everyone, and for the holiness without which no one will see the Lord.” —Hebrews 12:14

“So then let us pursue what makes for peace and for mutual upbuilding.” —Romans 14:19

How can we possibly miss the point? Nothing less than our very best will suffice when it comes to safeguarding unity in Jesus’s church as far as it depends upon us.

Excerpted from The Peace Making Church by Curtis Heffelfinger. Copyright 2018. Published by Baker Books, a division of Baker Publishing Group. Used by permission.