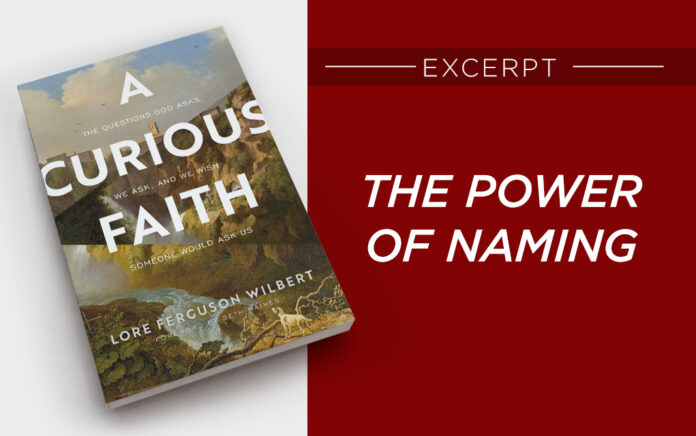 Excerpted From
A Curious Faith
By Lore Ferguson Wilbert

The next question God asks Adam and Eve also isn’t “Who are you?” It is “Who told you that you were naked?” (Gen. 3:11). This seems like it’s the sort of question most of us wouldn’t need to be asked, but in a paradise like this one, the difference between simply being naked and knowing you are naked is notable.

I have struggled with anxiety for my entire life. When I was little, it was called shy, and when I grew up, it was called nicer words like introversion or homebody. But not until I was in my late twenties did anyone say, “Do you think you struggle with anxiety?” They didn’t say, “Do you think you’re anxious?” or “Are you being anxious?” They asked, in so many words, might this persistent struggle I have also have a name, and could its name be anxiety?

It did and it was. And once I gave it a name, I was able to begin finding help for it.

Naming what we wrestle with or feel given over to can be one of the most difficult tasks of our lives. Sometimes it’s challenging because we really don’t know that there is a technical term for the problem. At other times, it’s challenging because we’re afraid of being labeled or put in a box or medicated or marginalized or disbelieved. We would rather the monster be invisible, behind a door or under our bed, nameless and formless, than give a name to the thing that threatens to eat us alive.

We think that by naming a thing we are giving it more power, but the truth is that by naming it, we become empowered. When we name the monster depression or anxiety, abuse or fear, sadness or grief, invisibility or anger, we begin to see the shape of the thing. We begin to see what feeds that particular monster and what starves it too.

Naming is power, but it can also lessen one’s power. Giving something a name means that we have compartmentalized it, given it boundaries, told the truth about who or what it is. I find it interesting that God doesn’t miss a beat over the fact that Adam and Eve have learned this new word naked. He is more interested in who told them they were naked, not because being naked is wrong but because it is important for them to know that a great enemy is afoot and that naming him will weaken him. Naming him will give shape to the monster in a way that had slipped past—or slithered past—Adam and Eve. They didn’t recognize the serpent as evil because they didn’t have a construct for evil. God is trying to show them that this shame they have over their nakedness has a source. He wants them to see that they are not the source of that shame, and neither is he. The enemy is someone else.

Who told you that you were ugly?

Who told you that you were stupid?

Who told you that you were too much?

Who told you that you were too little?

Who told you that you didn’t have what it takes?

Who told you that you did?

Who told you that people are scary?

Who told you that people are unimportant?

Who told you which people are unimportant?

Who told you that you were more important?

Who told you that you’re a quitter?

Who told you that anxiety wants to eat you alive?

The voices we listen to in our lives form us in the same way that the place we come from and now inhabit forms us. And God cares about those voices, especially if they’re saying something about us or him that isn’t true or isn’t important or isn’t the most important. He cares about us naming things as they are, telling the truth about what they are. But he cares even more that we know the enemy is a liar and a thief and a killer, that he will be destroyed, and that death will be too.

Who told you all those things? The most important thing is not that you’re naked and you know it now or you’re anxious and you know it now or you’re fearful and you know it now. The most important thing is that you know who the real enemy is (not you, not God, not the woman he gave—as Adam accused) and that you also know that nakedness or anxiety or fear or shyness or anger or insecurity isn’t the real enemy here. These may be true about us, but they are also what God wants to cover and heal and make whole. Before Adam and Eve left the garden, God covered their nakedness with the pelts of animals. He made a blood sacrifice to cover the effect of the enemy’s sin on God’s people. He did it again for all people, for all time, in the second Adam—Christ.

Your anger, my anxiety, your fear, my shyness, your lust, my grief, your pride, my shame—these effects of the enemy on all humans have all been named by God and covered by God. He’s not ashamed to call us his own, laden as we are with these lived and difficult realities. Instead, he makes a cloak big enough for all humanity, the shadow of his wings, the arms of Christ spread wide on the cross. He names it for us and then covers it.

Who told you the gospel wasn’t big enough to draw you in with your sin and suffering and brokenness and pain and fear? Who told you God’s love for you wasn’t enough?

Content taken from A Curious Faith by Lore Ferguson Wilbert, ©2022. Used by permission of Brazos Press.