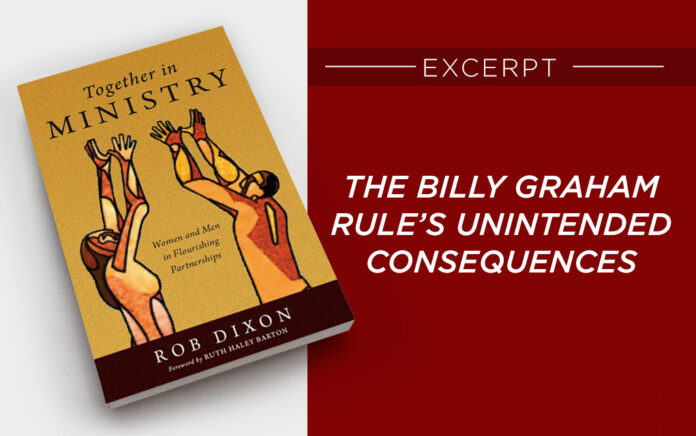 As women and men discern the appropriate contextualized boundaries for their specific ministry partnership, that partnership is more likely to flourish.

In October of 1948, Billy Graham’s ministry was just getting rolling. His rallies were starting to draw big crowds and his fame was spreading. In light of his newfound celebrity, and with an eye toward the various forces that could potentially trip up his ministry, Graham and his inner circle met in a hotel room in Modesto, California, during a series of evangelistic gatherings. There, over the course of an afternoon, they established a set of rules that would govern their ministry work, a list that came to be known as the “Modesto Manifesto.”

In the end, they articulated four different rules. They covenanted together to pursue scrupulous financial accountability, regular partnership with local church communities, and integrity in their publicity and reporting. Each of these rules were important to Graham and his cohort, but the fourth rule is the one that has become enshrined in churches around the world. Today this rule bears the moniker of “the Billy Graham Rule.” It states that male leaders should never be alone with women who are not their wives.

Back in Modesto, the thinking was that if Billy Graham could be systematically separated from women, he would be protected from a devastating moral lapse, and no one could make a false accusation of impropriety on Graham’s part. Graham himself wrote:

“We all knew of evangelists who had fallen into immorality while separated from their families by travel. We pledged among ourselves to avoid any situation that would have even the appearance of compromise or suspicion. From that day on, I did not travel, meet, or eat alone with a woman other than my wife.”

Over the years the Billy Graham Rule has become widely influential. Because of the Billy Graham Rule, pastors have spent decades driving separate cars to lunches and installing glass windows in their office doors, among other applications. Halee Gray Scott has conducted research regarding the Graham Rule, and she notes that “most of the men reported feeling the tension of living with integrity in a hypersexualized world. In following the Billy Graham Rule, they didn’t intend to exclude women or sexualize them. Instead, they wanted to ensure their actions were always above board. They also wanted to inoculate themselves against false sexual harassment allegations.” Truly, for generations of leaders, the Billy Graham Rule has essentially become the Eleventh Commandment, a must-follow for every male ministry leader who aspires to have a fruitful ministry that is above proverbial reproach.

But there is a problem here. Because for all the attention and energy given to the Billy Graham Rule, it hasn’t proven to be a fail-safe answer to the sexual tensions embedded in the context of mixed-gender ministry partnerships. While Graham himself dodged even a hint of scandal in his decades of public life, chances are that every person reading this book knows the story of some male leader who has transgressed their personal boundaries and fallen into sin, and stories like that emerged in my study as well.

And yet it goes beyond that, because the Billy Graham Rule was also critiqued in my research as having several unintended negative consequences—stumbling blocks for women and men who would aspire to build flourishing mixed-gender ministry partnerships. So not only has Graham’s rule failed to resolve the problem it was designed to address, it has also become an impediment to fully flourishing mixed-gender ministry partnerships.

My research revealed three examples of unintended consequences provoked by the Billy Graham Rule. First, a rigid adherence to the Billy Graham Rule can make it impossible for people to do their jobs. One interviewee, reflecting on her role as a supervisor tasked with developing male leaders, concluded that “I can’t do my job if I can’t be alone with a man.”

Systematically prohibiting leaders from being physically present with their followers can limit their capacity to fulfill their ministry duties.

A second consequence of a blanket acceptance of the Billy Graham Rule is that it can perpetuate the narrative that people are unable to control themselves from acting on their sexual impulses. Reflecting on just one iteration of this underlying narrative, Katelyn Beaty writes:

“The Pence rule arises from a broken view of the sexes: men are lustful beasts that must be contained, while women are objects of desire that must be hidden away. Offering the Pence rule as a solution to male predation is like saying, ‘I can’t meet with you one-on-one, otherwise I might eventually assault you.’ If that’s the case, we have far deeper problems around men and power than any personal conduct rule can solve.”

Several respondents decried this narrative with something akin to outrage, with one saying, “I’m a mature person, and I am in control of myself!” For these leaders, to be subjected to the Graham Rule minimizes the hard work they have done in discipleship and character formation.

A third unintended consequence of the Billy Graham Rule is that it can systematically deprive women of access, power and agency. One interviewee related the story of a time that she had to drive alone to a conference across Michigan’s Upper Peninsula because a male colleague insisted on not being alone in a car with her. At one level that reality alone was painful for this woman, primarily because his decision made her feel like she was some sort of threat to him. But, at a deeper level, what was more disturbing was the lack of access the arrangement afforded her. Often the drive home from a conference is where decisions get made about what will happen with the content from the conference, and, as she put it, “women don’t get the same access” when the Billy Graham Rule is in play.

Thankfully, the research process generated a viable workaround. Instead of foisting the Billy Graham Rule on every mixed-gender partnership in every setting, the research suggests that women and men should thoughtfully discern what boundaries are right for their particular partnership in light of who each person is and is becoming, and then live out those boundaries with integrity and accountability.

The issue with the Billy Graham Rule is not boundaries themselves. In fact, research participants detailed a wide assortment of usable boundaries, including meeting in public places, meeting exclusively during daytime hours, letting others know if they are traveling together, and discerning whether certain topics should be off-limits. In one instance, a veteran female leader talked about a time she and her male co-worker were traveling together on a ministry trip. The trip would involve an overnight, so they decided to stay with some of her donors “because if you’re in a hotel, it can look suspicious.”

So, the issue for those surveyed is not the presence of boundaries; instead, it is the universal application of the supremely restrictive boundary of the Billy Graham Rule. As Danielle Strickland notes, “To create safe boundaries for your life and ministry is a good idea. But taking the ones created for a specific set of circumstances at a certain point in time for a specific person and applying them to your life and ministry today is unhelpful, and in today’s world, actually harmful to women.” As women and men carefully discern the appropriate contextualized boundaries for their specific ministry partnership, that partnership is more likely to flourish.

Excerpted from Together in Ministry: Women and Men in Flourishing Partnerships by Rob Dixon. Copyright © 2021 by Rob Dixon. Published by InterVarsity Press, Downers Grove, IL. IVPress.com.