Home Resources Books When Life Is Crazy, God Shows Up 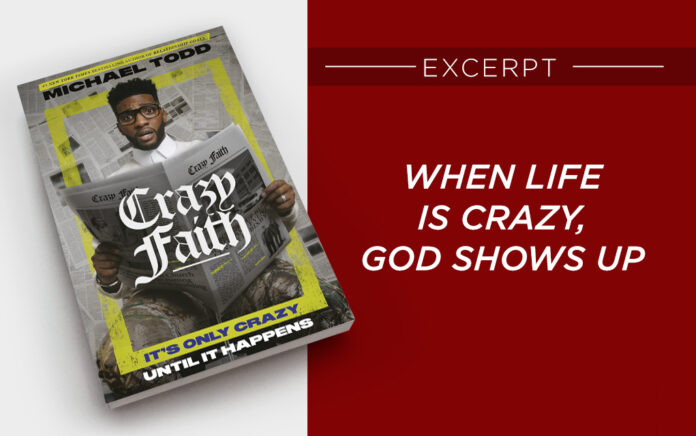 God’s Crazy Word Often Comes in the Darkest of Times

Has it ever occurred to you that the events leading up to Jesus’ birth didn’t happen at Christmastime? It’s pretty obvious once you think about it—Christmas didn’t exist yet!—but sometimes we get hung up on talking about the birth of Jesus only during the month of December. But from Mary and Joseph’s point of view, all the craziness unfolding in their lives happened on a regular Tuesday (or whenever). And since God shows up in our lives on regular Tuesdays (or whenever), Jesus’ earthly parents-to-be are awesome models for how to live in crazy faith. So, whether you’re reading this on Christmas or the Fourth of July or Father’s Day or any day ending in y, get in the Christmas spirit with me for the next few minutes.

When we’re H.O.T. (humble, open and transparent) with one another, we admit life is crazy. Our families are crazy. Our jobs are crazy. Politics is crazy. And here’s the thing: it’s the same for Joseph and Mary. Their homeland is ruled by the foreign military superpower of that time, the Roman Empire, and the Romans have no time or patience for Jewish worship, customs, beliefs and traditions. They want the Jews to get with the pagan program and stop acting like they are God’s special chosen people. There is religious and cultural persecution, massive inequality and political unrest all around. (Does any of this sound familiar?) Anyway, life is already crazy—and that’s exactly when God shows up.

Mary is engaged to marry Joseph, but before their wedding, the gospel of Matthew tells us, “she became pregnant through the power of the Holy Spirit. Joseph, to whom she was engaged, was a righteous man and did not want to disgrace her publicly, so he decided to break the engagement quietly” (1:18–19).

As if life isn’t crazy enough, the Holy Spirit comes to disrupt all their plans.

In my holy imagination, Mary breaks the news to her fiancé and then Joseph goes for a long, angry, frustrated walk, muttering to himself the whole way. “Why she got to mess it all up? We made promises. We had dreams! We were gonna travel and have adventures before settling down to have Joe Jr. and his little brothers and sisters. And now Mary done messed it up.” Joseph gets so agitated and bent out of shape in his emotions that he does what most of us do when our feelings get to be too much: he takes a nap. But then an angel of the Lord appeared to him in a dream. “Joseph, son of David,” the angel said, “do not be afraid to take Mary as your wife. For the child within her was conceived by the Holy Spirit. And she will have a son, and you are to name him Jesus, for he will save his people from their sins” (vv. 20–21).

Now, if I were Joseph, I’d be like, “Be straight with me: life is already crazy, I’m already in this entirely jacked-up situation, and now you’re giving me instructions and responsibilities?”

Let me be straight with you: yep.

I know for a fact that you’ve never been in Joseph’s exact situation, but I’m willing to bet you’ve felt the same way in your own set of crazy circumstances. I know I have. Really? Right now? On top of everything else that’s going on, now God’s asking me to do something extra crazy?

This is how God does, time and time and time again. Why? Because our God loves to use crazy things that don’t make sense to sensible people to confound anybody who thinks he’s got it all figured out. Check this:

God chose Joseph and Mary to play essential roles in his rescue operation for humanity for the same reason he chose a 20-something Black man with a mug shot and six months of community college to grow a local church and start a worldwide movement. Not making sense is our God’s M.O., because if it made sense, we could take the credit. (Take note: His plans always make sense on the back end, when we’re through to the other side, but at the beginning? Straight-up crazy.)

God gets the ball rolling for our journey of crazy faith by first giving a crazy word. It might come in a dream (like for Joseph), during early morning prayer in your daughter’s bedroom (like for me), or from a friend who texts you out of the blue because you’ve been on his mind. It could come from a preacher on Sunday morning, a book you read before bed on Wednesday, or a TikTok you watch waiting for your Friday afternoon teeth cleaning. However it comes, it won’t make sense to anybody else. (For that matter, it might not make sense to you.)

God’s crazy word often comes in the darkest of times. We already talked about the dark and crazy times Joseph and Mary were living through, but your crazy word from God will also come in darkness. And that’s a good thing, because Psalm 119 says, “Your word is a lamp to guide my feet and a light for my path” (v. 105). When God’s crazy word comes, it gives just enough light for you to take the next step, then the next, and then the next. You obey. You forgive. You meet with him in prayer. You take a risk. You wait on him and serve his people.

Excerpted from Crazy Faith: It’s Only Crazy Until It Happens. Copyright © 2021 by Michael Todd. Used by permission of WaterBrook, an imprint of Penguin Random House LLC.