Home Resources Books The Danger of Putting Security Before the Kingdom 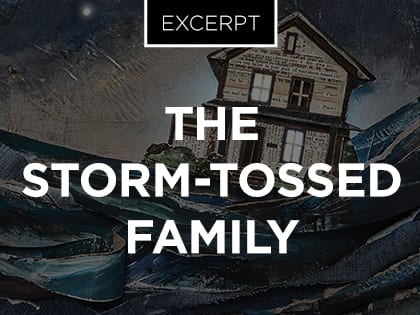 We can often make the pursuit of security into an idol that makes us easy mislead. Here’s where we should look instead.

Excerpted From
The Storm-Tossed Family
By Russell Moore

A long time ago he was a psychic. The man standing there in front of me in the church lobby made it clear that he had never been a real telepath, back in his pre-Christian days telling fortunes. He was just scamming people, he said, by pretending to be able to peer into their futures. He said the pay hadn’t been all that impressive, but it was the easiest job he ever had. He could convince people he could see into the spirit-world, first of all, by using the same methods one would see in a horoscope or a fortune cookie: broad generalizations that could apply to anyone. “I can see that you have had a surprising development in your life” or “You’ve had some sadness” or “I’m seeing someone in your life with an ‘r’ somewhere in their name.” More importantly, though, he said the secret to getting repeat customers was to make sure the future he foresaw wasn’t nuanced or complicated at all. One could gain a happy client if one would “see” something really good, telling the person what he or she wanted to believe. “You will find love,” or “I see a lot of money in your future.”

But one could also gain a repeat customer if one prophesied something catastrophic, while maintaining that the only way the client could avoid this disaster was if he or she employed the psychic to help keep it from happening. He was ashamed of his past, and he shrugged his shoulders, wondering if this was the first time I’d ever heard of such a thing. I assured him it wasn’t. I’ve seen prosperity gospel evangelists do the same maneuvers on television for years.

Witchcraft is witchcraft, whether it comes with a Bible or with a crystal ball.

The ex-psychic told me that the surprising thing to him was that most people really did not want dramatic things for themselves. Of course, very occasionally he would meet someone who wanted global fame or a private jet with his name on the side (again, probably a television evangelist, come to think of it). Most people didn’t want a penthouse on Park Avenue or vacations in Switzerland. Most people just wanted a basic sense of security, a reassurance that everything was going to be all right. They wanted to know that they could count on someone to love, that they would be able to meet the obligations of those who depended on them. If they had children, they wanted to know that they would be happy and cared for. They either wanted a very minimal Promised Land, or a very avoidable Armageddon—that’s all.

What embarrasses me is how often I am just like those who flock to roadside psychics or health-and-wealth preachers. I don’t want a fleet of sports cars or a private Caribbean island. I just want security too. I just want to know that my family will make it through life all right, and that I will do well at getting them there. Like the Canaanites looking to fertility religions promising rain for the fields and fertility for the wombs, I sometimes want a gospel just natural enough to let me run my own life but just supernatural enough to give me what I need to get there. I want a sign that my life-plan will work out, and, if not that, then whatever voodoo it takes to fend off disaster.

When Jesus taught us not to be anxious, we too often interpret that through a highly individualistic grid, as though Jesus were simply telling us to avoid the psychological distress of selfish desires. The worry Jesus spoke against though is far more than just individual. He told us not to ask, “What shall we eat?” or “What shall wear?” (Matt. 6:31). For those in a kin network (as virtually every one of his hearers would have been), those are questions not just about personal security but family security. And Jesus did not dismiss those concerns (“Your Father knows you need these things”). He commanded us though to “seek first the kingdom of God and his righteousness (Matt. 6:32–33).

From Outreach Magazine  3 Biblical Tips for Beating a Depression Dip

The kingdom is first; the family is not.