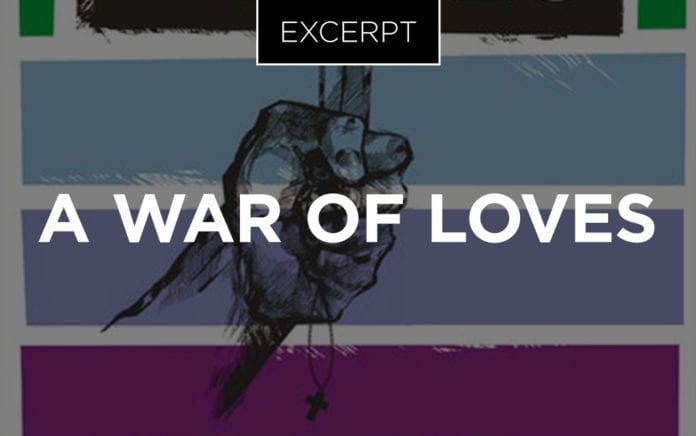 Both progressives and conservatives have often made an idol out of sexuality. The answer is to return our focus to the gospel.

Excerpted From
War of Loves
By David Bennett

Living as a celibate gay/SSA Christian has been a huge challenge. I have experienced disgruntlement, prejudice and social avoidance on both sides of our polarized culture and church. Many have accepted me, of course, but I always feel that, while I have never had a pink triangle pinned to my shirt like Brazda, the reality of my situation—choosing in obedience to Christ to be celibate—is something for which, for better or worse, I have often been judged in and outside the church.

It often seems, from my vantage point, that the gay rights movement isn’t always interested in the rights of all gay people but rather is interested in the rights of the majority who believe in same-sex marriage. If there were real diversity and concern for everyone within the gay community, there would be acceptance of those like me and the churches that agree with my choice to embrace celibacy.

When celibate gay Christians choose to share publicly in the church, we are bombarded from all sides. We are asked to justify and explain ourselves. The constant questioning and pressure is exhausting.

Most progressives reject celibacy as a good or default choice for those who are gay or have same-sex desire. They do not see it as a necessary step in discipleship. To them, being gay requires sexual expression or romantic relationships, and our inner nature is a better guide to how we should live than the revelation of Christ in Scripture.

Some conservatives, or traditionalists, often refuse to love and move out toward the gay community, preaching that repentance means requiring gay people to erase their history and identity. Many on the conservative side of the church do not like that I appreciate much of the human rights work done by the gay rights movement. The reality is, I wouldn’t have the freedom to write this book without the hard-fought progress achieved by that movement.

Another common criticism I’ve received is that I’ve made homosexuality my ultimate identity by calling myself a celibate gay (or SSA) Christian. This is deeply frustrating. It ignores the reality that I have died to my same-sex desires by submitting them to the lordship of Christ and choosing celibacy. My sexual orientation is a profound part of my story, and it is the very weakness that gives God unique glory because I live my life by faith in his Son. Many Christians don’t understand that the terms same-sex attraction and homosexuality have questionable backgrounds for most gay people because they are linked to harmful therapies that attempted to cure homosexuals. There is no perfect term.

From Outreach Magazine  3 Vital Signs of a Spiritually Mature Christian

Both sides make our sexual lives the most important reality rather than focusing on eternal realities and how those impact our walk with Christ. But I cannot wait for progressive and conservative Christians to move on from this sinful divide. I have to live my life in Christ today, regardless of what the cultures around me choose or how we obsess about semantics.

Christians like me need to be held to the same standards as any other disciple and yet listened to and cared for in light of the particular challenges of being same-sex attracted. We need to die to ourselves just like everyone else and have our now-but-not-yet obedience affirmed by our church family. No Christian should carry a cross alone, and if someone is, the church is not fulfilling the law of Christ, as Paul talks about in Galatians 6:2.

Anglican theologian Sarah Coakley says that because the church is like a lightning rod for culture, the broader issues discussed in the culture concentrate in it. The church in the West has been involved in a long and complex conversation about sexuality, which has not been very public, open or positive for many.

This is nothing new. When the apostle Paul wrote to the various churches under his care, he saw how the Greek and Roman culture in their cities clashed with the culture of God’s kingdom. The resulting issues distracted Christians from living under the lordship of Jesus. Paul struggled to establish a unified, Christ-centered, cross-based discipleship for those new Gentile followers.

Paul lovingly rebuked these communities and tried to integrate everything into Jesus Christ, his cross and his resurrection. The Spirit inspired Paul’s writings, and we still cherish them as our applicable, authoritative guide. We see in these letters Paul’s difficult wrestling with the various cultural challenges to the gospel. If it was hard for him, it is bound to be hard for us. Just like in Paul’s time, the Christian challenge for us today is to renew our lives and experiences through Jesus Christ and his Word and the Spirit.

The Western church, however, has often failed to resist idolatry. In the last century, it has worshiped family above God and his kingdom, putting pressure especially on sexuality. In the postwar 1950s, the church made the nuclear family the idolatrous center of middle-class life. The 1960s reacted to this idolatry by throwing off the repression of desire and pursuing “free” sexuality. It brought its own set of idolatries.

In his book The History of Sexuality, French philosopher Michel Foucault attempted to uncover Western culture’s trend of categorizing “deviant” forms of sexual desire, which were outside the societal normal of heterosexual marriage. Homosexuals were considered to be a separate class of person, akin to the “sodomite” in the medieval world. This reinvention of homosexual people as a perverse or deviant species meant that LGBTQI people lived in abject secrecy and fear for many years. In the 1950s and 1960s, medical speech described homosexuality as a dangerous perversity that threatened the utopic stability of the nuclear family.

Sadly, the church was influenced by these worldly ideas, which disciplined and punished those who reported no change in their sexual desires despite their efforts to eradicate them. The church and science colluded to try to cure gay people through all sorts of therapies (lobotomies and electroshock treatments are just a few). The terms same-sex attraction and homosexuality came out of this crucible. This was not of the Holy Spirit and the kingdom of God but a tragic confusion and abuse of the reality of gay people.

We live in a time in the church when the facade has cracked, and we know these idolatrous ideas no longer work—indeed, never did. But my concern is that the church is capitulating to new pressures from today’s culture. We are replacing old idolatries with new ones by developing prideful factions related to homosexuality, instead of repenting and seeking God in the unity of the Spirit and under the clear teaching of God’s Word.

I pray each side will be willing to change or repent, to seek God’s will alone, to preach the gospel to the world and to make Jesus the center. Full stop.