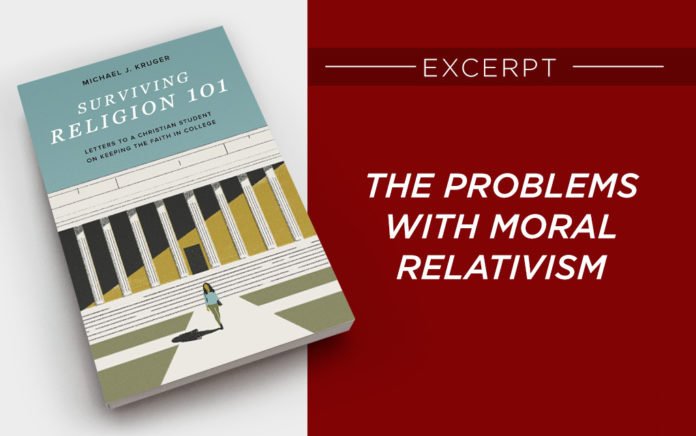 The primary complaint about Christian morality is that it is absolute. Christians have the audacity to think that the moral commands of the Bible apply not only to them but to all humans. And it is this very thing, at least in today’s culture, that makes Christians so judgmental. They try to impose their moral code on others. And why is this a problem? Well, your fellow students at UNC will argue that it’s a problem because morality doesn’t work that way. Morality is not absolute but subjective; what is right for one person is not necessarily right for another. In other words, morality is relative (there’s that word again), varying from person to person and culture to culture. Which is precisely why Christians need to keep their moral objections to themselves.

Once again, this line of reasoning has a surface-level plausibility to it. Maybe morality is like music or art—what works for one person just doesn’t work for another. But upon closer scrutiny, moral relativism runs into a number of serious (and, I would argue, fatal) problems.

First, there’s the question of how your fellow students know that morality is relative. They say it confidently and repeatedly, but what are the grounds for their claim? If you think about it, moral relativists are making an enormous claim. Essentially, they are declaring that they have figured out one of the deepest mysteries of the universe—indeed, one of the most perplexing aspects of our existence—which is the meaning of right and wrong and of good and evil. And your nineteen-year-old friends have stood up to basically declare, “Well, we’ve got this one figured out. Right and wrong are just subjective entities; there’s no objective good and evil. Nothing to see here. Move along.” But, of course, you know it’s not that simple. In order to make such a grand, sweeping claim about the universe, one would have to know a lot about it.</p

How does your classmate know that there can be no moral absolutes in the universe? Has she searched it out extensively? Has she examined every aspect of it? Does she have omniscient knowledge? Obviously, no college student (no human) has done any of these things. Moral relativism is just something people say is true, but you will discover they have no reason for knowing it’s true. They declare it confidently, expecting everyone just to agree. But in the end, it is an arbitrary claim. It’s more about what they wish were true.

Second, moral relativists are profoundly inconsistent. They talk about how morals are subjective, but their actions go the opposite direction. Indeed, the very people who insist on moral relativism are often the same ones delivering the most scathing moral condemnations of other people’s behavior. The very people who insist that Christians should keep their morals to themselves are often the ones proclaiming their own moral objections the most loudly.

Here’s the point: moral relativists often act in direct opposition to their own stated position. Now, you may wonder why they do that. Why flip-flop? The answer is found in the next problem.

Third, if moral relativism were really the case, then it would undercut our ability to object to any moral atrocity. We might not like what Hitler did to the Jews, but we couldn’t say it was really wrong because, after all, right and wrong are subjectively determined by each culture. We may not prefer the behavior of Dylann Roof when he massacred nine African Americans inside their church, but we couldn’t say it is really wrong. If everyone can create their own system of right and wrong, then Dylann Roof can do it too.

Ironically, this current generation (your generation, Emma) has begun to realize this problem more and more. Even though they say morals are relative, they are actually driven by a deep moral outrage over the wrongs they see in the world—polluting the environment, sexual abuse, systemic racism. And this moral outrage has created what David Brooks of the New York Times has called a “shame culture.” Any dissenters or violators of the new moral order are quickly castigated online and shunned through social media. In many ways, this is a strange new form of religious fundamentalism. As Samuel James observes, “The modern campus culture is a religious culture, but it’s a religion without God.”

Now does this mean that the age of moral relativism is over and that a new age of moral absolutism has replaced it? I don’t think so. The fact of the matter is that most of your friends are both moral relativists and moral absolutists at the same time. For some behaviors, they are one; for other behaviors, they are the other. They pick and choose. So when it comes to environmentalism and the treatment of refugees, they abandon moral relativism and act as if there are moral absolutes after all. But when it comes to their sexual behavior, then they suddenly become moral relativists again, insistent that morality is determined by each person and culture. They want to have it both ways.

But in the end, moral relativists find themselves on the horns of a dilemma. Either they go “all in” on their moral relativism and really follow it consistently, or they just admit that there are moral absolutes after all. When pressed, I think most of your UNC friends will go with the latter option. They know that some things are just objectively wrong, regardless of what other people say or feel about it.