Home Books Apologetics How to Have a Conversation on Racism 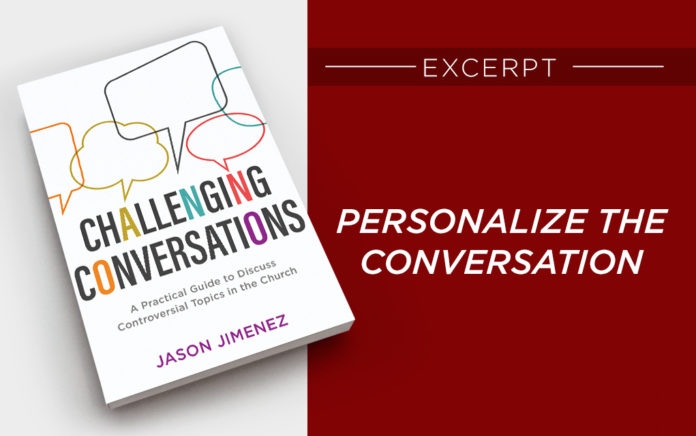 Excerpted FromChallenging ConversationsBy Jason Jimenez As I mentioned earlier, having an honest dialogue about racial reconciliation is no small task. It’s easily the most challenging conversation because of how inextricably linked racism is in American culture (and to some extent in some churches). But before sharing how to bring about racial reconciliation within your Christian […]

As I mentioned earlier, having an honest dialogue about racial reconciliation is no small task. It’s easily the most challenging conversation because of how inextricably linked racism is in American culture (and to some extent in some churches).

But before sharing how to bring about racial reconciliation within your Christian community, I’d like to share a portion of a blog post written by Pastor Kevin DeYoung that challenges us to take a closer look at our hearts. He candidly writes:

“The vast majority of Americans know that racism is wrong. It’s one of the few things almost everyone agrees on. And yet, I wonder if we (I?) have spent much time considering why it’s wrong. We can easily make our ‘I hate racism’ opinions known (and loudly), but perhaps we are just looking for moral high ground, or for pats on the back, or to win friends and influence people, or to prove we’re not like those people, or maybe we are just saying what we’ve always heard everyone say. As Christians we must think and feel deeply not just the what of the Bible but the why. If racism is so bad, why is it so bad?”

There are some Christians who tend to think that as long as they are not calling Black people the N-word or using Mexicans for cheap labor, they are not racist. They may not be racist (by all cultural standards), but that doesn’t mean they are free of prejudice. This isn’t a guilt trip or an indictment; it’s a fact. We all come to the moral issue of racism with our own set of views, blinders and prejudices.

From Outreach Magazine  The Astonishing Significance of God as 'Father'

The NFL tight end Benjamin Watson was right when he made the observation that racial division still exists (in part) because Black people and white people see the world through entirely different lenses. But being different isn’t a good enough reason to avoid talking about racism or seeking racial reconciliation. Christians should always seek to restore relationships by finding ways to break down the barriers of bigotry and hate.

I must confess that the most difficult people for me to talk to are racist people. I come from a very diverse background, and so it’s hard to picture a life with only one ethnic culture. I love the mixture of people, cultures and personalities that have spiced up my life. There’s something unique and authentic within diversity. So although I still struggle when hearing a prejudicial remark or racial slur, I remind myself not to attack the person but to try to reason with them.

But, again, even if things aren’t entirely cordial and the situation is awkward, it doesn’t give you or me an excuse to abort the conversation. Consider everything we’ve talked about so far in this book. What happens if you keep making excuses and avoiding challenging conversations? It only hinders any progress you can make to affect change in the life of your church.

Susan Davies warns Christians of what happens when we decide to ignore speaking up about the justice of God:

“Each of us is called to seek God’s justice in the community and in the workplace. Failure to do so increases both our complicity and our culpability. When we fail to act, we acquiesce in the corrosive and deadly sin that subverts and denies God’s creation and salvation of the world. However, when we act toward God’s justice, we move forward on the journey of joy, which is God’s will for all the earth.”

I don’t think you have come this far in the book to fail to act. I trust that God will use you in a mighty way to cultivate real relationships with people of different ethnicities and to stir up more conversation on how to bring racial restoration to your church.

Here are five steps that will help you jump-start a conversation with someone about racism and hopefully start the process of racial restoration:

1. Recognize your own biased heart.
2. Facilitate an open and nonthreatening conversation.
3. Establish parameters to circumvent getting too political.
4. Actively listen and learn about the person’s upbringing and background.
5. Look to Jesus Christ to eliminate racial inequality and tear down any walls of hostility.

Excerpted from Challenging Conversations: A Practical Guide to Discuss Controversial Topics in the Church by Jason Jimenez. Baker Books, a division of Baker Publishing Group, copyright 2020. Used by permission. BakerPublishingGroup.com