Home Books Apologetics Does Christianity Need to Be Saved? 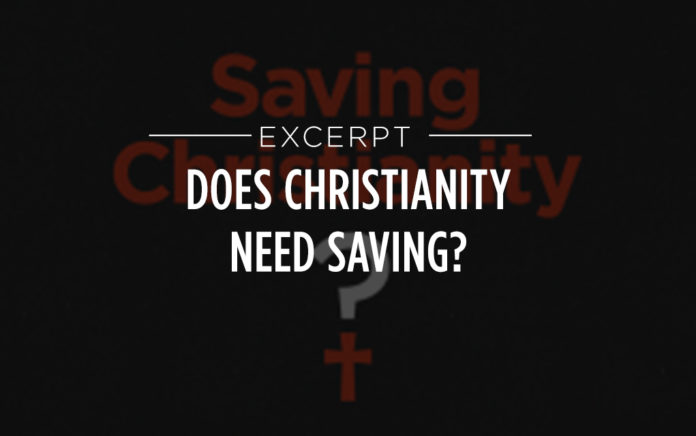 The greatest threat to Christianity has never come from the outside.

A friend—let’s call him Jack—recently told me a story that broke my heart. I’m sure it breaks the heart of Jesus, as well.

“My wife found Christ and was baptized in a nondenominational community church,” Jack told me. “She grew up there, and she and I were married in that church by the pastor who founded it. The pastor was a godly man who preached the gospel. He taught the entire Bible, from Genesis to Revelation, as the inspired Word of God.

“I remember sitting in his office with my bride-to-be for our premarital counseling. The most important thing he wanted to know about me was this: Was Jesus my Lord and Savior? Was I a genuine, Bible-believing Christian? Would the Bible have absolute authority over my conduct as a husband and as a Christian?

“Years went by, and that godly minister passed away. The church board called a new minister.

“When the new pastor arrived, he said all the right things and professed to be an evangelical Christian. But over time, his message changed. He told the congregation he was ‘evolving’ in his faith. He stopped calling the Bible ‘the Word of God,’ and began calling it ‘the book about God’ or ‘the book that contains God’s message.’ If you asked him whether the Bible is inspired by God, he’d say, ‘Parts of the Bible are so relevant and life-changing that you’d have to call them “inspired by God.”’ If you asked him whether people needed a Savior, he’d tell you, ‘Some people need God, others don’t. God isn’t offended by those who don’t need him.’ He once called himself ‘an agnostic who loves Jesus.’

“Obviously, this man was not an evangelical Christian. He didn’t preach the gospel of salvation by grace through faith in Jesus Christ—the gospel on which the church was founded. As it became clear that this pastor had fallen away from orthodox, biblical faith, some board members tried to oppose him, but others supported him.

“Hundreds of people who had faithfully attended and supported the church began leaving in disillusionment. Over a few years, the church dwindled from a membership of around nine hundred to less than one hundred.

“With so few donors, the congregation could no longer afford to maintain the buildings of that once-thriving church. The pastor and the board sold the church site to a secular business. Today, the tiny congregation still exists under its original name, but without a permanent location. The people meet in various places, wherever they can find a meeting place. Sometimes they meet in a city park or in a senior living center. Of course, there’s nothing wrong with a church holding services out in the community, especially as a form of evangelistic outreach. But that’s not what this church is doing. It was forced to sell off the physical legacy of its evangelical past because it no longer preaches the gospel of Jesus Christ.

“The original name of that church still exists as words on a website. But the church where my wife and I were married is dead. I looked at the website recently and it’s filled with clichés and slogans: ‘We are a progressive Christian community.’ ‘Love wins.’ ‘There’s more faith in searching than in certainty, in questions than in answers.’ ‘We’re about having a conversation, not indoctrination.’

“This idea they call ‘progressive Christianity’ has already killed one church. Like a cancer, it’s metastasizing and trying to kill all of orthodox, evangelical Christianity. The people in the church where my wife and I were married didn’t see it coming. They were blindsided. People need to be warned. They need to know how dangerous these ideas are.” We live in times of spiritual and moral confusion. So-called progressive Christianity is infiltrating and seducing the evangelical church—and it is killing the church while claiming it is “saving Christianity.” A few years ago, the cover of Newsweek’s Easter issue blared in red letters “The Decline and Fall of Christian America.” In 2015, the Daily Beast website asked, “Does Christianity Have a Future?” As our culture wobbles wildly on its spiritual axis, many are asking whether Christianity can survive in the 21st century. Some are asking whether we need to reinvent Christianity in order to save it.

The only harm that can ever come to the gospel or to the church of Jesus Christ comes from those who are trying to “save” Christianity by reinventing it and distorting it beyond recognition.

From the first century to the 21st century, the greatest threat to Christianity has never come from the outside—from persecution, atheism, the godless culture or opposing religions. In fact, external attacks have historically strengthened and purified the church.

The greatest threats to the church have always been internal. The greatest threats have come from those who claim to be Christians, who are leaders in the church, but whose teachings and doctrines are at odds with God’s Word. Satan is working overtime to destroy the church from within. It’s always an inside job. Many once-evangelical churches are now filled with the unsaved, the uncommitted and the unconverted. As the church goes, so goes society.

Some false teachers started in the evangelical Christian community but left to form “progressive Christian” communities or “emerging” churches. But many others are still inside the evangelical church, or teaching at evangelical colleges, universities and seminaries. They are poisoning the Bible-believing church from within. We need to recognize false teachers and false doctrines when we see them and not be fooled.

In the Great Commission, Jesus commanded the church to evangelize and convert the world for him. Today, the world is converting the church on behalf of Satan, the god of this world. When churches and church leaders corrupt “the faith that was once for all entrusted to God’s holy people,” they are cooperating in the destruction of the church, sowing seeds of spiritual death. God’s Word is the true light for all of humanity, especially for us as 21st century Christians, living in these chaotic times.

These leaders who think they are saving Christianity by deconstructing God’s truth are in fact the greatest danger the church faces today. Though I don’t doubt their good intentions, I believe that Satan is using them as willing marks to destroy the church from within. And that’s why, when speaking of those who identify themselves as “progressive” or “emerging,” I deliberately place the word Christians in quotation marks. Please understand, I am not judging these people as unsaved. God alone knows the status of their souls. But to me, the word Christian has a specific definition that these progressive “Christians” don’t meet—by their own declaration. And I simply cannot in good conscience refer to people as Christians who treat God’s Word as an untrustworthy and unreliable narrative, and who deny the truth of John 3:16 and John 14:6. The good news is that the historic gospel of Jesus Christ is still the Good News. The good news is that there are sound, biblical answers to the questions and doubts raised by postmodern, post-evangelical, progressive “Christians.” The good news is that we do not have to wander in a fog of uncertainty about God’s Word and God’s Son. The good news is that God is still in control of history, and Jesus is still the way, the truth and the life.