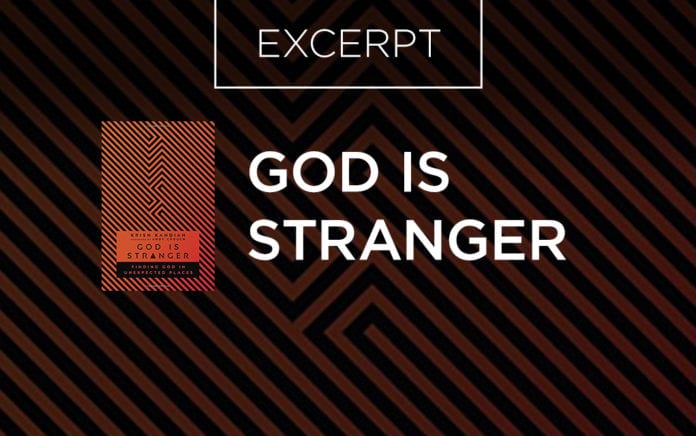 I came to know God in a new way exploring the troubling sections of the Bible—God as a stranger.

Excerpted from
God Is Stranger
By Krish Kandiah

When I returned home to my safe, semi-detached, centrally heated, digitally connected house in the UK, I could not shake this idea from my mind. It was not that the treasured Bible verses I had grown up loving so fondly were untrue; it was just that the rest of the Bible suddenly seemed a lot more relevant. Not just for a family in fragile circumstances, fleeing ISIS and the bombing campaign of President Assad, but also for the rest of the world, faced with these strange and terrible times.

It was time for me to rediscover the stranger parts of my Bible. The parts lurking between the highlighted sections. The black-and-white verses. The angry parts. The eccentric parts. The politically incorrect parts. The horrific stories of executions, displacement, genocide and depression—stories that sadly reflect much of the world today. Although I had always believed them to be just as inspired as the safe, cozy parts of Scripture, I had been inclined to avoid them for the same reason I often turn the television off when I hear the words “Viewers may find some scenes distressing.” Some truths had seemed unnecessary to dwell on, just too disturbing for my otherwise peaceful, comfortable life. But now it was time to face up to them.

It was time to look at what I had long considered to be the “lowlights” of the Bible. And as I read those passages, it turned out that I had indeed been missing something—that it was precisely in these places that God turned up, although often unannounced, uninvited and unrecognized. Suddenly I came across countless passages that talked about God being unpredictable, unfathomable, uncontainable, untamable. He is ineffable, sublime, mysterious, awesome. He is beyond compare and beyond description and beyond analogy. God tells us quite clearly, “My thoughts are not your thoughts, neither your ways my ways (Isa. 55:8). Had I been so keen to know God my Father, Lord, Friend and Savior that I had missed the Bible’s consistent teaching that God is also other, higher, stranger?

From Outreach Magazine  The Value of a Small Church

As I explored the more difficult passages of Scripture, I discovered an unlikely narrative arc flowing through the whole one that challenged me, that undid some of my most cherished prejudices and made me question the parts of the Bible I thought I knew so well. This narrative that spans the centuries and across continents contains a thread of deliberate strangeness. It is full of misery but also full of mystery, packed with the weird but also somehow weirdly wonderful. Through the more perplexing stranger stories and more difficult incidents related in the Bible, I discovered a God who cannot be fully pinned down, explained or predicted. Traveling the inhospitable terrain of much of the Old Testament, I discovered there was much to learn about the hospitality of God. In the more fearsome passages, where God turns up as a stranger, I began to hear his offer of an opportunity too good to turn down.

Tell me more about this book »
Order this book from Amazon.com »
Read an interview with Krish Kandiah »