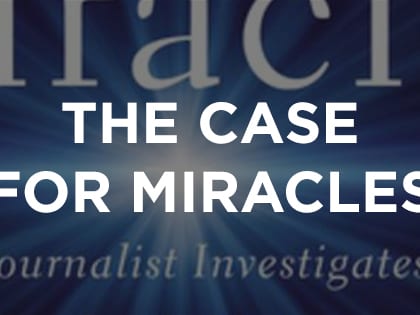 Lee Strobel: A Journalist Investigates Evidence for the Supernatural

The Case for Miracles
A Journalist Investigates Evidence for the Supernatural
(Zondervan, 2018)

WHO: Lee Strobel, best-selling author and the former legal editor of The Chicago Tribune.

HE SAYS: “Does a miracle-performing God actually exist, and has he left his fingerprints all over supernatural events throughout history down to the present age? Is he even available to intervene in your life today?”

THE BIG IDEA: An investigative reporter spends two years researching the case against and the case for miracles, using a scientific survey via Barna Research to reveal American beliefs in miracles.

THE PROGRESSION:
Part 1: With a methodical approach, sound reasoning and expert opinions, the author starts his book by first presenting the case against miracles. Each of the three chapters in this section logically debunks each argument.
Part 2: In “The Case for Miracles,” Lee employs the same reasoning to provide evidence and research.
Part 3,:“Science, Dreams, and Visions,” offers case studies and corroborated stories of how God uses all three to bring about a supernatural event.
Part 4: “The Most Spectacular Miracles” draws on biblical accounts, nature and Jesus’ resurrection to argue for miracles.
The book concludes with “Difficulties with Miracles,” a straightforward look at what happens when miracles don’t happen. “When I see something extraordinary that has spiritual overtones and is validated by an independent source or event, that’s when the ‘miracle’ bell goes off in my mind.”

A CONVERSATION WITH LEE STROBEL

In your latest book, The Case for Miracles, you conduct a thorough investigation on miracles. What led you to this topic?

I wanted to discover where Americans stand on the topic of miracles. And I wanted to know how many people have had an experience that they can only explain as being a miracle of God.

From Outreach Magazine  We Are What They Grow Beyond

The big use, however, is whether belief in supernatural occurrences is based on mistake, misunderstanding, fraud, legend, rumor, wishful thinking—or reality. I was truly interested in testing the strength of the case for miracles.

How would you define a miracle?

I’m partial to the definition offered by the late Richard L. Purtill: “A miracle is an event brought about by the power of God that is a temporary exception to the ordinary course of nature, for the purpose of showing that God has acted in history.”

Why are there more stories of modern-day miracles occurring within developing nations than in the United States?

In America, we have a lot of sophisticated medical technology, which is God’s gift to us. That’s the way he typically brings healing. But in many other places around the world, that’s not available, and perhaps God’s intervention is the only hope.

There are four characteristics that are often shared by outbreaks of the supernatural: illiteracy—miracles show God’s power without language; people don’t have a framework in their culture for theological concepts such as sin and salvation; limited medical care, making miracles the only resource for the afflicted; and the spirit world is very real, making miracles demonstrations of God’s power.

Can anyone “prove” a miracle has happened?

Corroborated eyewitness testimony—especially when coming from multiple, independent observers known for integrity—can go a long way in establishing whether a miracle claim is credible.

Why would God use dreams and visions to manifest himself to Muslims?

It is estimated that 50 percent of Muslims around the world can’t read and 86 percent don’t know a Christian who can share the gospel with them. Most do not have access to a Bible. It seems these dreams plow the hard soil of Muslim hearts. The dreams motivate them to seek the real Jesus and to find the truth in Scripture.

From Outreach Magazine  Increase Your Reach at the Outreach Summit

What happens when, instead of a miracle, a person prays but doesn’t experience a miracle?

Though miracles are more common than we may think, they’re still relatively rare—which means for most people, a sudden and complete healing isn’t going to happen. But that doesn’t mean God is absent. We are not cast adrift to suffer on our own. Scripture promises that God will eventually heal everyone. He will cause good to emerge from the difficulties of life.

How did your investigation affect your personally?

I came to my own verdict about miracles: they’re often credible and convincing, and they contribute powerfully to the cumulative case for Christ.