Home Resources Books Thy Will Be Done 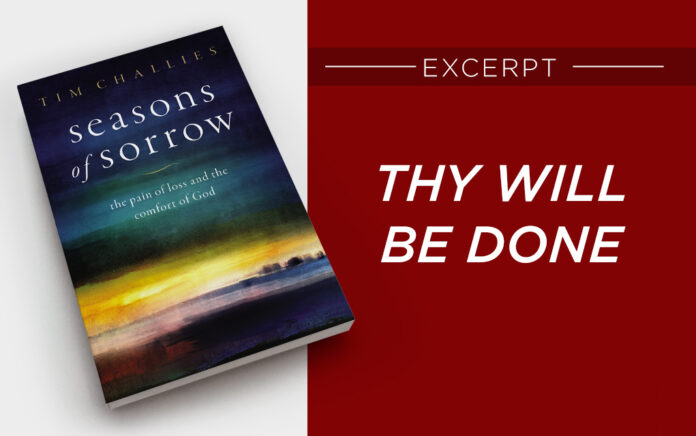 We prayed as a family before Nick and Abby left for their fall semester, then snapped a photo of the two of them standing together outside our home—our two college students. It was August 1, and they were headed to Louisville, Kentucky, Nick for his junior year and Abby for her freshman. I made the journey with them since these were the early days of a worldwide pandemic, and regulations mandated that foreigners like us quarantine for two weeks upon arrival in the United States. We dutifully stayed isolated together in a borrowed basement apartment until the fourteen days were up, then drove to campus and unloaded a tower of suitcases and boxes. I hugged Nick, told him I loved him, and watched as he walked away arm in arm with the woman who, just weeks later, would accept a ring from his outstretched hand. And that was the last time I ever saw him. It was the last time I ever will see him on this side of heaven.

Abby returned home after the on-campus memorial service and has been with us ever since, waiting out the long winter break between semesters. But now school is opening again, classes are beginning, and we are having to bid her farewell. It’s a good thing, we know, but it’s also a very hard thing. Abby is booked on the first flight of the day—a short hop to Detroit, where she will be able to connect to Louisville. We got up at 4:00 a.m. to make sure she had time to clear security and customs before her 6:30 a.m. departure. While we were confident her paperwork was in order, we’ve learned not to take too much for granted when it comes to transiting international borders. Leave two hours at minimum, they advise.

We roll to a stop outside Toronto Airport’s terminal 3. Abby has had to pack for two seasons—for a cool southern winter and a warm southern spring. I wrestle two giant suitcases to the ground behind the van and, doing the math, realize they weigh as much as she does. The pandemic continues to rage, and since regulations forbid me from as much as going through the terminal doors, she is going to have to manage them on her own. That doesn’t seem fair.

I already know she has her boarding pass and passport with her; I already know she has figured out how to navigate all three airports she’ll pass through today; I already know an infatuated young man is eager to pick her up on the far side. I have already prayed with her—Aileen, Michaela, and I had huddled together and prayed for her safety and protection before she headed out the door. So what’s left to do but to say a final goodbye?

I do my best to be brave, as I know I won’t be doing her any favors if I break down and cry. I take her face in my hands, look her in the eye, and say, “I love you. Be safe. I’ll see you soon.”

I kiss her on the cheek and then leave her to drag her two full-sized suitcases into the terminal. Climbing back into the van, I have one more prayer: “Nevertheless, not my will, but yours, be done.”

My temptation in a moment like this is to be anxious. It’s to think of what happened the last time my children headed south, to use my mind to fabricate a vision of a similar future and then to feel all its sorrow, its grief, its trauma—to shed tears over sorrows that may never come. I could cripple myself under the weight of such fantasies. I could crush my spirit. I could commit a slow suicide. I often sense this temptation building. The first scenes begin to play in my imagination and I have to decide whether

I’ll let them roll or whether I’ll shut them down. I know what Jesus said: “Do not be anxious about tomorrow, for tomorrow will be anxious for itself. Sufficient for the day is its own trouble.” I know it’s God’s responsibility to concern himself with the future, and mine to live well in the present. I know God promises grace sufficient for every trial, but only trials that have actually happened, that exist in the real world, rather than the world of fantasy. I know God’s power is made perfect in genuine weakness, not imagined. But still I sense anxiety’s tug, still I begin to see those scenes in my mind, to feel them with my emotions, to dread them in my heart.

I have learned that grief is often accompanied by fear and amplified by it. The mother whose son has been struck by a car worries about her other children safely crossing the street; the father whose daughter was killed in a car accident frets every time his remaining children back down the driveway. And I, whose son collapsed and died, cannot fall asleep in the evening until I have received assurance that both my daughters are still alive and cannot be content in the morning until I am sure both have made it through the night. Nick’s death has made us face mortality and human fragility in a whole new way. My children may as well be made of glass. I’m just so afraid that if Providence directed I lose one, it may direct that I lose another. If it has determined I face this sorrow, why not many more?

How, then, can I let go of such anxiety? How can I continue to live my life? The only antidote I know is this: deliberately submitting myself to the will of God, for comfort is closely related to submission. As long as I fight the will of God, as long as I battle God’s right to rule his world in his way, peace remains distant and furtive. But when I surrender, when I bow the knee, then peace flows like a river and attends my way. For when I do so, I remind myself that the will of God is inseparable from the character of God. I remind myself that the will of God is always good because God is always good. Hence I pray a prayer of faith, not fatalism: “Your will be done. Not as I will, but as you will.”

There is comfort in any prayer—comfort in asking God for his care, for his blessing, for his protection. There is comfort in expressing my desires, my preferences, my hopes and plans. But there is more comfort still in wrapping it all in this prayer. I pray it as a profession of faith, an acknowledgment of God’s love, of God’s goodness, of God’s sovereignty. I pray it as a declaration that his knowledge is more expansive than my own, that his will is better than my own, that his wisdom is higher than my own.

So I will pray for the desires of my heart. I will ask God to bless and protect my girl. I’ll plead with him to bring her home to me in May. But the steel thread woven through the fabric of such a prayer is not “my will be done” but “thy will be done.” Ultimately, if there is to be comfort, it will not be grounded in the hope that nothing bad will happen to me or to the people I love, but in the perfect God whose perfect character is displayed in his perfect will.