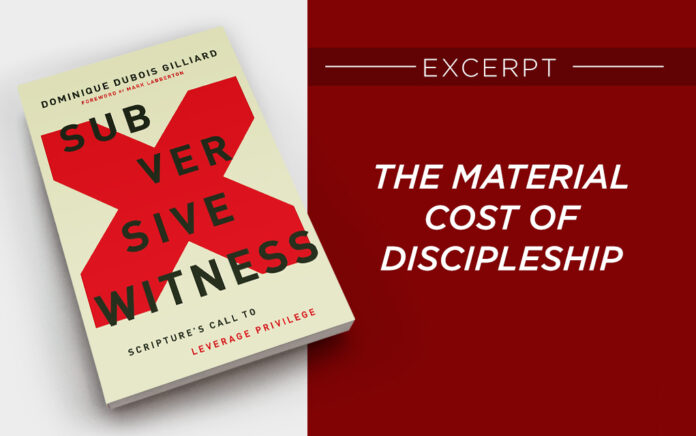 The Material Cost of Discipleship Few interactions illustrate the material cost of discipleship like Jesus’ interaction with the rich young ruler in Matthew 19:16–22. This young man thought religion was about getting into heaven. He approached Jesus to ensure that he was good enough and had done enough to secure eternal life. He coveted Jesus’ […]

The Material Cost of Discipleship

Few interactions illustrate the material cost of discipleship like Jesus’ interaction with the rich young ruler in Matthew 19:16–22. This young man thought religion was about getting into heaven. He approached Jesus to ensure that he was good enough and had done enough to secure eternal life. He coveted Jesus’ affirmation but only to assuage his doubts. This self-centered interaction was about uncovering any fine print he may have missed—and confirming that following Christ would not be too disruptive to his privileged lifestyle.

Jesus did not deny that the man had indeed obeyed all the commandments since his youth; nevertheless, Jesus still desired and required more of him. Jesus instructed the rich young ruler, “Go and sell all your possessions and give the money to the poor. . . . Then come, follow me” (Matt. 19:21 NLT). This passage reveals that knowing the commandments, and even religiously following them, is not what ultimately secures eternal life. This is important because our faith can become a checklist of dos and don’ts. Faith can become reduced to an internal experience that lacks outward manifestations (remember, as James 2:17 says, faith without works is dead) and relational fruit. When this happens, we mistake legalism for the gospel and misinterpret dutifulness for faithfulness.

From Outreach Magazine  Shea Tuttle: The Life and Faith of Mister Rogers

Jesus ultimately called the rich young ruler to understand that he—as is also the case with you and me—was blessed to be a blessing. Followers of Christ do not have the option of hoarding wealth when we see our neighbors in need. Nor can we use that with which God has entrusted us exclusively for our personal gain or the enrichment of our biological family.

Furthermore, we cannot restrict the beneficiaries of our wealth to those within our ancestral bloodlines. As followers of Christ, we have a biblical, theological, and ethical responsibility to sacrificially share our wealth with the poor and leverage the privilege, access, and resources with which we have been entrusted to further the kingdom on earth as it is in heaven.

In asking the rich young ruler to envision and enact this new posture toward the poor, Jesus implored the young man to begin identifying with the poor in new and radical ways. Jesus summoned him to explore new and creative avenues to faithfully steward all with which he had been entrusted. Ultimately, Jesus was calling the rich young ruler to live as a citizen of heaven by transcending the social barriers and constructs that dictate human interactions—especially between the haves and the have-nots—in worldly empires. Jesus commissioned the rich young ruler to do this because the world knows that we are his followers when we love one another. This love is most profoundly expressed across lines of difference and in relation to the least of these.

The cost of Christ’s words ultimately constituted this man’s grief; he decided to cling to his money, possessions, and privilege rather than fostering authentic communion with the poor. He refused to follow Jesus, partially due to his wealth, but also because his identity was so rooted in his social status and power.

Consequently, the rich young ruler refused to identify with the poor and therefore forsook the opportunity to participate in socioeconomic justice and kingdom restoration. Rather than intentionally leveraging his wealth, possessions, and power for justice to further the kingdom and love his disenfranchised neighbors, he chose self- centeredness. In the end, the cost of discipleship was too high for him. He chose what he knew—the financial, social, and political perks of this world—over the unknown. He elected privilege and the pleasures of this world over kingdom treasures.

Jesus calls his followers to a countercultural, sacrificial, and cruciform life. Christianity is not about internal morality or rigorously keeping a list of commandments. It is about becoming more like Jesus. As we grow in Christlikeness, our lives will become more reflective of the love, mercy, and justice of Jesus.

Faithfully following Jesus requires us to ask, is the gospel still good news when it costs me something? Moreover, is the gospel of Jesus Christ still good news when it costs me everything? The gospel is not merely a get- out- of- hell- free card; it is a divine invitation to participation, to serve as colaborers with Christ in restoring all things—which includes not only broken people, but systems, structures, and communities that have been perverted by sin— to God.