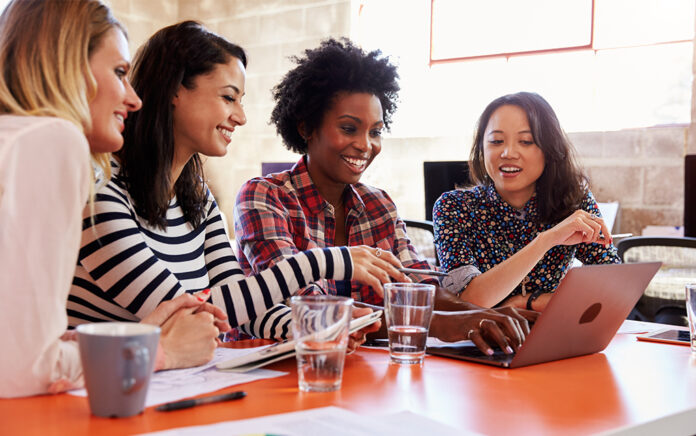 Am I willing to get uncomfortable, to be corrected, to make mistakes? If not, my rising is only for me, and not for all women.

I grew up in the conservative evangelical church being taught that my primary role in life was to be subservient to leadership—male pastors, teachers, and eventually, my husband. The indoctrination I received was centered on modesty, purity and how to best serve the men in my life.

I was told that I may not lead, I may not teach, I may not preach. I was told that I was easily deceived as a woman and would have to go to the men in my life to help me understand Scripture. It felt wrong, but being exposed to nothing else, I sought to shrink myself into the role of silent, submissive woman.

I was told that being a “good girl” who played by all the rules and kept my body modestly covered up would protect me from harm. So when I was first sexually assaulted at the age of 13—I thought it was my fault.

I carried the shame of that encounter for years, until as an adult, I traveled the world as a missionary who worked with oppressed and exploited women, and saw that what had happened to me had happened to many, many other women.

The lies I had believed that (1) the sexual assault was my fault, and (2) it was a result of individual sin started to crumble under the weight of the stories I heard. My story of survival was not only my story, it was the story of so many women.

Our good behavior did not protect us. Too often men whom we were told to trust were actually the men doing much of the harm. It turns out that there was only one factor that made us vulnerable: our gender.

Seeing this began to open my eyes to the system of patriarchy that functions in the world at large—but more specifically, in the church. I began to research alternate points of view on what the Bible says about women and their roles, finding that I had been handed only a fraction of the story and that was done as a way to protect power.

I began to ask why so many women were being harmed and found that we as a society, as a world, tell women not to be raped—we don’t tell men to not rape. We know that 1 in 3 women are survivors of assault, but there are no readily available statistics on how many men assault.

And why do men assault in the first place? Recently, many researchers have come out to say that sexual assault is not about sexual urges as I had been taught, but power differentials. Psychoanalyst Lyn Yonack says it this way:

From Outreach Magazine  Unfollowing Jesus: Navigating the Storms of Doubt

“Despite its name, sexual abuse is more about power than it is about sex. Although the touch may be sexual, the words seductive or intimidating, and the violation physical, when someone rapes, assaults or harasses, the motivation stems from the perpetrator’s need for dominance and control.”

When I began to understand this, I realized that my faith tradition was complicit in sexual assault and the harm of women. The sometimes subvert, often overt themes of patriarchal gender roles were taught to both women and men in the church, contributing to enormous power differentials. It wasn’t about the gospel, it was preserving and defending the patriarchy.

As my eyes opened to patriarchy, I learned that harms to women were not one-off cases, but part of a system that valued men over women. I also began to see my complicity in it.

I made a vow to speak up and stand up for myself, to not let myself or women be harmed by it anymore. But as I began to see this system for what it is, I also awakened to yet another system that had a vice grip on me—white supremacy.

So much of my life had been dedicated to being the good girl—and part of that was buying this myth of “white saviorism” defined by Layla F. Saad as “well-intentioned white missionaries and volunteers (through the business of voluntourism) traveling to countries in Africa, Asia and Latin America to help ‘rescue’ BIPOC (Black, Indigenous, people of color) from their country’s poverty and lack of development. Though well-meaning, such volunteers often travel to these countries with not much more than their passion and their desire to do good.”

From Outreach Magazine  Even if We Can’t Sing, the Story Is Not Silenced

It was me in a nutshell, joining the mission field to help others, without taking time to pause and listen to the people I was trying to help. What’s more—not taking the time to understand how my people, white evangelical Christians, had not only historically and continually committed harm against women, but many different races.

If I was really going to do better, I had not only to resist patriarchy, but also white supremacy in myself.

I finished Hood Feminism by Mikki Kendall recently, and in it Kendall writes about the harms of white feminism. This looks like white women being concerned about equal pay for themselves, but not the fact that BIPOC women are paid significantly less than they are. She points out that hunger, affordable housing, gun violence, health care and other social concerns are all feminist issues, but that these have not been at the front of white feminist movements.

In the early suffragette movement, white women leaders would ask Black women to march in the back. When women got the right to vote, the white feminist movement was not fighting the oppression over that right for Black women in the South.

And that’s what I want to say to all of us, to myself, as I continue to move forward in the activism sphere. Questions I continually ask myself are, Am I concerned for the rights of others as I am for my own? Am I willing to get uncomfortable, to be corrected, to make mistakes?