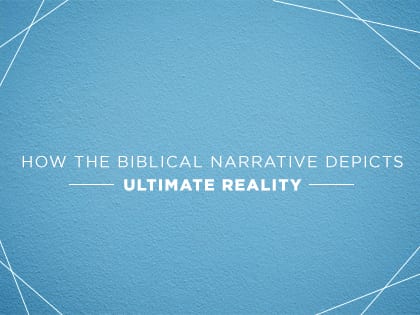 “This supernatural being, this holy one, this creator of all and covenant maker, is passionate.”

According to the biblical narrative, ultimate reality, the supernatural source of everything upon which all finite being depends, is God, a being above and beyond the world, yet abiding in and with it, who speaks, acts, and freely enters into reciprocal relationships with creatures by responding to their acts and pleas.

The clearest revelation of him in Hebrew literature is found in the writings of the prophet who wrote under the name Isaiah. Isaiah begins by speaking on behalf of God who calls his Hebrew people, his chosen people, to reason with him (1:18 KJV); he warns them of judgment for disobedience (idolatry and injustice), and promises them forgiveness for repentance and renewed faithfulness to the covenant he established with them.

Yahweh God, the Creator and Lord of all the earth, the Holy (separated, above) one, enters into negotiations with his people, threatening and promising them—based on their response to his call. Isaiah’s vision (6:1–9) is a classical biblical text pointing to God’s ultimacy, God’s supernatural existence as high and lofty.

God’s personal nature is expressed through his emotional outbursts of anger at the people’s unfaithfulness and injustice and his compassion if they will repent and turn around. This supernatural being, this holy one, this creator of all and covenant maker, is passionate.

Many philosophically minded interpreters have treated such divine emotions in Hebrew narratives as anthropomorphisms, figures of speech attributing to God humanlike characteristics, who as ultimate reality, is supposedly incapable of emotions because such are allegedly too limiting. We will return to this later; suffice it to say for now that Isaiah’s revelation of God cannot so easily be interpreted figuratively. And Isaiah was not alone in this; the book of the prophet Hosea, among others, reveals God as emotional, showing grief, anger, and compassion.

A recurring theme throughout Isaiah is God’s steadfast love for his people. Through the prophet God promises the people blessing because of his steadfast love, but on the condition that they return to him in faithfulness to their covenant (16:4–5).

A most interesting narrative in Isaiah is about God’s responsiveness to a king’s plea to extend his life (chapter 38). God sends the prophet to inform King Hezekiah of his impending death. The king begs God for more years of life and God listens and relents, changing what he decreed would happen, giving Hezekiah fifteen more years to live (38:5). Again, this is often chalked up to anthropomorphic speech by philosophically minded interpreters who bring to the text baggage borrowed from extrabiblical philosophies.

According to most extrabiblical metaphysical schemes, ultimate reality cannot be affected by finite beings. Plato’s “Form of the Good,” Aristotle’s “Unmoved Mover” and “Thought thinking itself,” Hegel’s “Absolute Spirit”—all are incapable of changing his (or its) mind in response to events in time, space, and history. But God, the ultimate being, the absolute person of biblical revelation, is intensely personal, self-limiting, and self-determining, and can voluntarily change his mind in response to his covenant partners’ pleas.

But is the Yahweh God of Isaiah really ultimate? Does he deserve such an exalted metaphysical title? Again, Isaiah answers (or God answers through Isaiah): “‘To whom will you compare me? Or who is my equal?’ says the Holy One. ‘Lift up your eyes and look to the heavens: Who created all these? He who brings out the starry host one by one and calls forth each of them by name. Because of his great power and mighty strength, not one of them is missing’” (40:25–26).

Thus Isaiah leaves no doubt about Yahweh God’s ultimacy as the sole source of all things upon whom everything is dependent. “This is what God the Lord says—the Creator of the heavens, who stretches them out, who spreads out the earth with all that springs from it, who gives breath to its people, and life to those who walk in it” (42:5).

And yet, this same supernatural, all-powerful God upon whom everything depends for its existence makes covenant with people: “I, the Lord, have called you in righteousness; I will take hold of your hand. I will keep you and make you to be a covenant for the people and a light for the Gentiles, to open eyes that are blind” (42:6–7).

Lest anyone think this creator and covenant-making God of steadfast love and judgment, this ethically minded Lord over all, is one of many, he speaks through Isaiah, declaring, “I am the Lord, the maker of all things, who stretches out the heavens, who spreads out the earth by myself” (44:24).

Also lest anyone think other beings beside him determine the outcome of things, the course of history, Yahweh declares through Isaiah his absolute sovereignty: “I am the Lord, and there is no other. I form light and create darkness, I bring prosperity and create disaster; I, the Lord, do all these things” (45:6–7).

Clearly the God who reveals himself through Isaiah is both supernatural and personal in the senses described above. And this God, Yahweh, reveals himself as ultimate reality—the sole source of all that is, above whom there is no other.

This God holds all power, even if he delegates some to his creatures, and at the same time is free to use that power however he wishes to, even to the extent of holding it back and not using it as he threatened to. And this ultimate reality, Yahweh, is by nature loving-kindness, a longsuffering and compassionate God who also cares about justice and will not forever withhold judgment. These are all major themes of Isaiah as well as the rest of the Hebrew Bible.

Roger E. Olson is professor of theology at George W. Truett Theological Seminary of Baylor University. He is the author of many books, including Questions to All Your Answers: The Journey From Folk Religion to Examined Faith and How to Be Evangelical Without Being Conservative.