Home Resources The Impact of Welcoming the Stranger 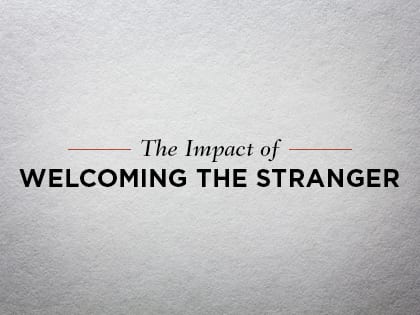 “They said I was the first American who had talked to them in six months. What message does that give to them about Christianity?”

Most of us have had the experience of being a stranger in a strange place—whether at a party where we didn’t know anyone or in a foreign country where we stuck out like an orange in a bushel of apples. For white American Christians, it may be difficult for us to remember moments when we were considered strange. But if we are honest, we can certainly think of a time when we sensed the eyes of everyone in the room looking at us as if we didn’t belong. It is a healthy exercise to put ourselves in these types of situations, especially if we want to learn how we can love strangers as we love ourselves.

My most recent experience of this was at a McDonald’s in Utah County, Utah. I had a large beard and (still have) more than my share of tattoos, so in a conservative and ultra-Mormon place like Utah County, I was clearly a stranger. Sure enough, two minivan-driving moms rubbernecked as I walked into the restaurant, and an old man almost tripped and fell on account of staring at me. I didn’t belong, and their looks of suspicion toward me confirmed that. When we are able to remember what it feels like to be a stranger in a strange place, we can more easily think of ways we can welcome and love strangers when we encounter them—even if it’s as simple as saying hello.

You might think that saying hello is too simplistic, that loving strangers certainly entails much more than that. And sometimes it might but not always. A few years ago, our family was grocery shopping at the local Shop ‘N’ Save. As we passed the canned food aisle, I noticed a woman in hijab and burka browsing the garbanzo beans, so I told my wife that she should go say hello to the woman. Our time in Jordan has made us ultra-aware of Muslims wherever we go. She objected at first, mostly because of the whole cultural convention we have in America to ignore strangers and just go about our business.

I eventually convinced her to greet the woman, and as I pushed the kids in the cart, my wife went up to her and said, “As salaamu alaykum,” the traditional Arabic greeting that we learned while living in Jordan. My wife extended a welcoming hand to this stranger, whose name we found out was Fatima. Fatima said she worked at the local Islamic school in our town and was planning out the meal she would make for her family to break fast, as it was Ramadan. Pretty unremarkable stuff, right?

More recently, I was on a train in Denver with my brother. We had just finished watching a baseball game and were returning to the house where we were staying. I noticed two guys speaking in Arabic to one another a few rows ahead of us. Having lived in the Middle East, I found their chatter a welcome sound, as I had learned enough Arabic while living in Jordan to carry on a very basic conversation. There was a man standing near these two young men who himself was noticeably uncomfortable. I imagined his discomfort was due to the fear that these two Arabic-speaking guys were up to no good, or perhaps that they were potential terrorists on public transportation.

When the train stopped at a station, he moved to a different location in the car. I took the opportunity to move closer to these guys and interrupted their conversation in Arabic, saying, “Do you speak Arabic?” They looked confused and answered in the affirmative. We began talking, now in English, and I learned that they were students at the University of Denver, learning English in order to return to Saudi Arabia (their home country) to complete their university degrees. They then told me that I was the first American who had talked to them in six months of living in America. I was astonished and frustrated. How could these two live in my country for six months and never be acknowledged or approached by another American? What sort of message does that give to them about America or Christianity?

This takes me back to the guy who was uncomfortable in the presence of these strangers. If his discomfort was based in fear, however rational, he allowed that fear to take root in him. Maybe he got off the train and later told his wife that there were two suspicious Arabs on the train. Maybe he saw me talking to them and began to wonder what was wrong with me or if I was in on their plot to take over America. Maybe he thought nothing at all. On the flip side, perhaps he saw me walk up to these young men and, without fear, engage them in conversation and then realized how unfounded his fear of them had been. We will never know.

My brother and I had had some difficult conversations earlier that day about my work and my desire to help the Church move past fear and into love in relation to Muslims in our communities. When we got off the train, however, he said, “I can see what you’re talking about now. What you’re doing is pretty important.” Whether or not the anonymous man on the train felt that same wash of realization, my brother did. A lot can be said for living without fear alongside those who aren’t there yet.

We are told that we fear what we don’t know or understand. Instead of taking the chance and seeking to get to know these young men, to understand their story, and having a story to tell of the strangers on the train who were just two normal guys trying to make a better life for themselves, he chose to move to another part of the train. He chose the way of fear instead of the way of love.

Admittedly, it’s the path we often take. I believe he missed out on something special that night, which is the opportunity to change the minds of these two strangers about America and to change himself into a more open and loving person toward strangers in the future.

This article is excerpted from Of Strangers and Enemies: A Pathway to Peace for Jews, Christians, and Muslims (Frienemies Books, 2016). Copyright © 2016 J Robert Eagan. Used by permission.

J Robert Eagan is a teacher/writer/activator with The Isaac Ishmael Initiative and co-founder of the SE7EN FAST national event. For more information: JRobertEagan.com.