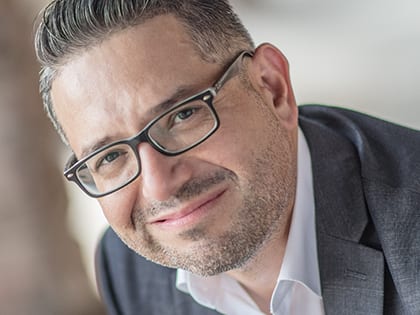 “We might not all share the same background, color or language, but we are all sinners in need of a Savior.”

Don’t miss part 1 of the interview with Jaime Loya, in which the pastor discusses his unexpected call to ministry and the beginning years of his church plant in the border town of San Benito, Texas.

Tell me about the lowest moment during your church’s early struggles.

We were doing a fundraiser and I burnt my arm trying to cook some chicken. I burnt all the hairs off my arm and had like a third-degree burn. After that, I remember telling God that if he wasn’t powerful enough for his church, then I couldn’t do it either. I kind of put it back on God, and I told the church I was through with fundraisers.

How did God take that?

How did that word from God change the church?

Our entire mindset shifted within days. Instead of trying to draw people into the church, we said, “You know what? Let’s go out and be the church.” We started doing everything we had envisioned from the very beginning—doing outreaches, developing leaders and training our people. We were getting ready for revival, for what God was asking us to do.

We started loving our community—helping people in need, painting houses, cutting lawns, doing outdoor events, caring for single mothers and widows. We started doing a whole bunch of crazy things. Over a short period of time, our church began to be recognized in the community as the church of the community. Even though we were a small church—probably one of the smallest churches around—we became one of the most significant churches in our city.

Let me guess: The church started to grow.

Our church went from 50 to 250 people in one year. We ended up building a bigger building, and in the years since, we have moved four times and grown steadily. We have started a second campus and plan another one a year from now. All of the growth stems back from that reimagining of what revival means.

Can you tell me a little bit about the community of San Benito and the current impact of your church?

With an average household income of around $30,000 per year and a poverty rate of 32 percent, our county, Cameron, is one of the poorest in the country. We make a fraction of what other churches do in terms of per capita. Yet it’s been a challenge we have gladly taken on. We educate our people about dealing with poverty; we teach them how to manage their money; we teach them how to get out of debt and how to be good stewards of their finances. Our church has transformed the community. In a city of 24,000 people, our church has a membership of nearly 2,500 people.

Is the issue of immigration critical to Cross Church?

Right now, the government has really cracked down on undocumented immigrants in our area. In San Benito, we are kind of in between; most of the people in our city are fourth- and fifth-generation Americans, so we haven’t really been affected as much as bigger cities like McAllen or Brownsville, which have a lot of undocumented first-generation people. That’s one of the reasons we decided to start campuses there, so we can engage the issue.

What are some ways you engage with the issue of immigration?

Catholic Charities has shelters here for children who are minors and cross the border. A lot of those kids come to our church on Sunday. The kids are just temporary. They come and they go; they are short-term stays. We minister to those children and love on them. Some of them have gone back; some of them have messaged us on Facebook when they get back to their countries, talking about how the short time they spent with us changed their lives. Some of them now want to be pastors or preachers. What the Devil meant for evil, God used for good. They came to church, they got the seed of God’s Word in their hearts, and they were cared for. They went back a different way than when they got here.

From Outreach Magazine  How Jesus Thought and Taught About Politics

How would you advise other churches to think about undocumented immigrants?

The immigration system is broken, but the Bible does tell us how we’re supposed to treat the alien and the stranger—and that is to love and care for them. Obviously, if people come here illegally that muddies the water. I don’t know if there’s a good, clear answer for that. But the church’s heart should be to take care of people whether they are here legally or illegally. We’re also a nation of law and order, and we respect and obey the laws. Somewhere there’s a middle ground. I think every church needs to decide what is best for the people God has entrusted to them. People are people, human beings, and need to be treated with the same dignity and respect no matter how they got here.

Given the times we live in, how should the church respond to race relations, whether it’s immigration, hate groups or police violence?

The church no longer has the luxury of staying silent. The world wants answers, and who better than the church to give them answers? It’s really one answer: reconciliation. The Bible says there is neither Jew nor Gentile, slave nor free—so God is, in some sense, color blind. I preached recently on the vessels that Elijah told the widow to bring to her house. God never specified the color, shape or size of the vessel. God doesn’t see people the way we see them. We see them based on gender, orientation, color, size and shape; God sees empty vessels that he can miraculously fill.

You prefer to call your church cross-cultural rather than multicultural. Why is that?

We have people from all types of cultures. I would say we have at least 10 nations represented in our church—most of them are from Latin America. But we also we have a lot of African-Americans, Filipinos and Asians. So we call ourselves a cross-cultural church because we want to reach across to a lot of different cultures. We also are cross-generational, because we have always had a heart for the youth. Our church has the largest youth congregation in our entire region. We have always had a heart for the next generation. We believe God is the generational God of Abraham, Isaac and Jacob. In a real sense, we use the word “cross” as an active verb.

From Outreach Magazine  The Other Six Days

I think the best answer is to preach the cross. The cross itself unites all the different races, languages, genders and generations. When you preach Christ and the cross, people from different cultures will come. We might not all share the same background, color or language, but we are all sinners, and we are all in need of a Savior.

You grew up hating poverty. Can you give me one story of a person you have helped escape from poverty?

David was a young man who came to our church separated from his wife and addicted to drugs. He was unemployed, tattooed from the neck down, and about to be homeless. He came to our church and got radically saved. He was a welder, and he had a desire to go into the construction business but didn’t have the money. The church bought him tools and connected him with one of our general contractors who taught him all the ins and outs of business. Somebody gifted him a truck. David reconciled with his wife, was delivered from drugs and started his own construction business. The other day he had just finished a big project and he brought me a tithe. He asked me to pray over the tithe because he never imagined he would be able to give so much back to God.

Can you give me another story that expresses the heart of your church?

We had a Muslim girl come to our church. She came as the result of a teaching job. She lived in upstate New York. Since there aren’t a lot of mosques in our area, she began asking for a place to go to church. Her friends told her to come to Cross Church. The fourth time she came, she was convinced that Jesus is the only way and came to the altar weeping. She got saved a month later and was later baptized. She told her family and they disowned her. She recorded a video of her saying how she had never felt better in her entire life. She talked about her Muslim and Islamic oppression. Now, she felt so free and so clean because of coming to Christ.

We’ve seen similar stories from Jehovah’s Witnesses and Catholics. That’s why we call it a cross-denominational church. This is a church for all people who desire to know him and grow closer to him. We don’t care what religious background or affiliation you have, or if you have none at all.

Do you find your story of perseverance to God’s call an encouragement to struggling pastors?

I really do want to encourage and help pastors. I have a heart for pastors. Anything I have was given to me by God. I worked from the bottom-up. I don’t think you could get lower. Because of the way we started and where we are today, my heart goes out to every struggling pastor. My heart breaks when I hear of churches closing and I think about where we were. When I speak with pastors and they are surprised I take time to talk to them, I tell them, “I was you.”