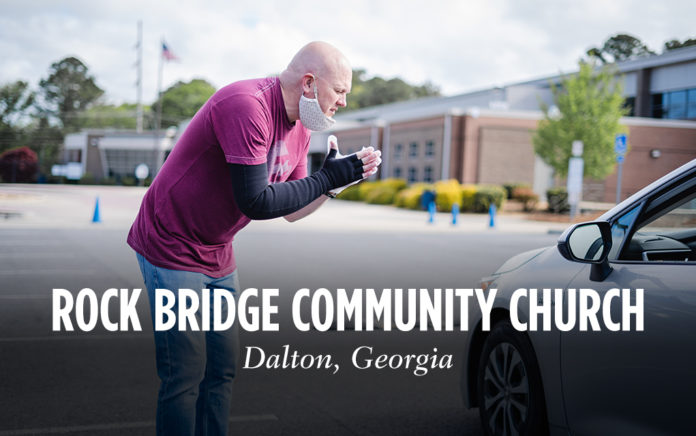 By focusing on emotional health, Georgia church experienced a turnaround.

Up until this past year, growth at Rock Bridge Community Church, a six-campus community based in Dalton, Georgia, had been relatively flat. The fact that they weren’t growing didn’t much bother them, but something else did.

About a year and a half ago, Lead Pastor Matt Evans noticed a recurring theme from attendees—an undercurrent of disappointment and maybe even hurt from people who didn’t feel nurtured. Though a lot of it was intangible, he did hear feedback like, “I submitted a prayer request and no one called me to pray for my sister.”

“We realized that we were too focused on ‘doing’ rather than ‘being,’” says Darrell Roland, executive pastor. “We were so focused on our strategic plan, it cost us the pastoral aspect of ministry.”

That led them to repent corporately as a staff, and their entire staff at all campuses began to be led out of their “be” by gathering weekly to spend time in prayer and repentance.

“We had not spent enough time seeking God,” explains Roland. “That was a foundational piece as it enhanced our spiritual life as well as our staff culture.”

The 60-plus staff members spent a year focusing on spiritual and emotional leadership as they walked through the book The Emotionally Healthy Leader by Peter Scazzero.

They had a weekly culture of worshiping together during staff chapel. If someone couldn’t make it, they recorded it and put it out on the staff resource page so they could watch later. What emerged was a cascading effect of caring that affected the whole congregation. But it started with staff.

Therefore, they reinforced a lot of things like leave times, sabbaticals and required spiritual retreat days. At Rock Bridge, the focus on spiritual and personal development is foundational. That’s why during their monthly staff one-on-ones, they check in on everyone’s well-being, asking things like, “How are you? How’s your family? How can I pray for you? What are some challenges you’re facing?”

The goal was never about increasing their numbers, even though that’s been a byproduct of the care they’ve shown.

“Attendance is not on the forefront; people engagement is,” says Roland, noting that they have something called E4, which they discuss at job performance reviews. The four Es stand for enlist, equip, empower and encourage.

“In that monthly meeting, we ask, ‘Who did you E4 this month, and which one of the Es did you use?’” explains Roland. “It creates that culture of caring for people and then their volunteers are doing that with their volunteers, and it cascades down.”

Interestingly, during the pandemic, they have noticed that it’s easier to E4 people virtually than in person simply because it’s less intense or intimidating for some people to talk over Zoom than in person. No doubt the coronavirus has created a number of shifts, not the least of which is connecting people from across the globe. At Rock Bridge, people from 18 states and several countries have joined in in just three months’ time.

“We will continue to put additional information online because we see this as a huge opportunity—one that we’ve been talking about for awhile,” says Roland. “We were going to do it in the fall, but COVID-19 made us do it in 72 hours instead.”

Because Rock Bridge was already a multisite church, they were already broadcasting. They just had to figure out how to translate that into a good online experience. They did so by shifting staff and redeploying them in different ways (e.g., editing video and audio, etc.). As the pandemic forced shutdowns across the country, people craved connections more than ever. Rock Bridge responded by creating 51 new virtual groups for folks to plug into—some series-based and others focusing on parenting, marriage and other emotional needs. They’ve been hugely popular.

“We’re making it clear that online is here to stay,” says Roland.

When the church did open its doors again for in-person services, they were pleased to greet first-time guests who had watched them online. Congregation members welcomed them—and everyone else—with emoji signs and masks that read, “Under this mask is a smile!”