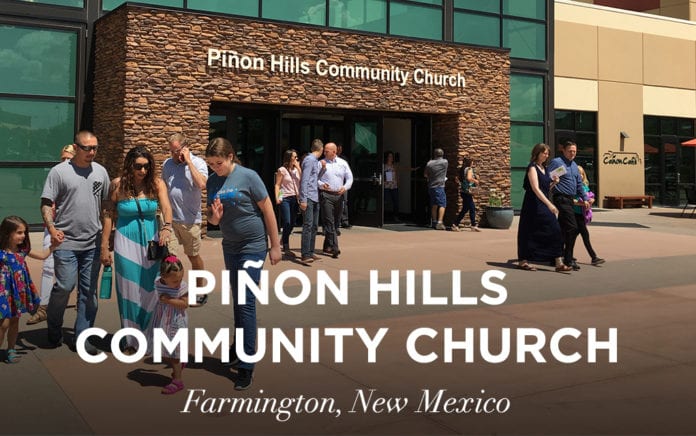 When Matt Mizell moved from San Diego, California, to Farmington, New Mexico, in July 2018 to become lead pastor of Piñon Hills Community Church, his mentors cautioned he should anticipate a 10% drop in attendance simply because that’s how it typically goes when a new pastor arrives. Instead, average weekend attendance at Piñon Hills increased from 800 to 1,200.

“There’s no explanation for that other than it is a blessing from God,” says Mizell. He does note, however, that in the years leading up to 2018, staff at Piñon Hills Community had been concentrating all of their efforts on launching a number of international ministries. As a result, it took away from the health of the church itself. Mizell set out to remedy that.

“I wanted us to go back to focusing on building the local church and having a healthy congregation,” he says. “There was clearly a thirst for that as a lot of people who had previously left the church came back.”

It follows Mizell’s mantra of striving to do common things uncommonly well. This means incorporating the basics of ministry—offering children’s, student, young adult, men’s and women’s ministries—but recognizing that when things aren’t working, it’s vital to go back to the drawing board.

“We have to be OK with killing off good to make room for great,’” says Mizell, who maintains that it’s the small details that make the overall organization change direction.

For example, when Mizell first joined the staff he noticed the church had problems engaging the congregation in life groups. The model had always been to have members meet weekly in someone’s home for a potluck dinner and Bible study. In theory, it sounded great. The reality, however, was that the logistics weren’t realistic given San Juan County is the largest and most spread out county in New Mexico. People who live on Native American reservations travel over an hour to get to the church while others come in from Colorado.

From Outreach Magazine  10 Tips for Telling the Christmas Story

“To expect someone to come all that way to a life group in the middle of the week is a big ask,” says Mizell.

Piñon Hills had to find a way to build community and did so by launching 25 interest groups in which congregants could gather for a meal and a mini Bible study, then have fellowship that revolved around a shared hobby or activity. For instance, they have a group for four-wheeling, running, knitting, hiking and boating.

“We thought outside the box and plugged into creating relationships in a different way,” says Mizell, who one day hopes to offer more than 100 different groups.

He knows things can change in an instant. After all, Farmington had been a booming oil and gas town. Then plants and wells began shutting down and jobs disappeared. Despite the poor economy, more people are joining Piñon Hills Community than ever, with Native Americans being its fastest-growing demographic. And it’s an interesting journey since the Native American culture believes in a medicine man.

“I teach them the gospel but help them understand that I’m not the solution—Jesus is,” says Mizell, who must be sensitive to the level of knowledge each member of the congregation holds. He pulls from his experience working as a youth pastor when he would preach to both middle and high school students.

From Outreach Magazine  Welcoming In, Reaching Out: Word of Faith Family Worship Cathedral

His goal is for everyone to leave service with something that they can apply to their life, regardless of whether they have been coming to church for 25 years or if they just walked through the door.