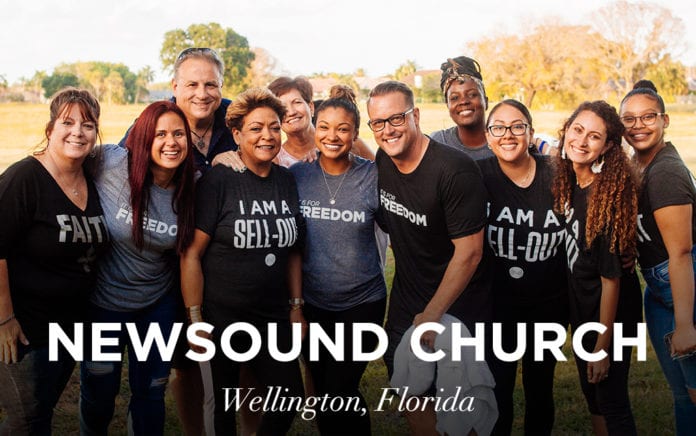 When Lisa first came to NewSound Church, she was mesmerized by the experience. After the service, she approached Lead Pastor Josh Mauney and said, “That was amazing. How much are the membership dues?”

“She was serious,” recalls Mauney. “She wanted to be a part of the congregation but had so little church context that she didn’t know how to proceed.” Now, 18 months later, Lisa serves in multiple services and regularly invites others to church.

Much has changed in the past year and a half, not only for Lisa but also for NewSound Church, located in Wellington, Florida, an area that has seen massive growth. It’s a particularly mind-blowing reality when you consider that Palm Beach County is one of the most unchurched communities in the United States. And that’s precisely what drew Mauney to the area.

“My wife and I wanted to go to a place where there was great need,” explains Mauney, who says that bringing the church to Wellington is like bringing water to the desert. He understood, from personal experience, what it’s like to step inside the doors of a church and feel totally out of place.

“I remember walking into a sanctuary the first time thinking, ‘Who are they waving at? Why are their arms up in the air?’” That’s why he regularly makes a point to explain all aspects of worship during the service.

“We don’t get to make assumptions that people know who David is and that he fought Goliath or that Noah built a boat,” says Mauney. “Our biblical literacy, even for church people, is very low, so we’ve got to teach and preach everything by putting the cookies on the bottom shelf.”

One aspect of South Florida Mauney loves is that it’s a melting pot for all cultures, languages and demographics.

“It’s not unusual to be standing in the hallway after service and hear a Spanish speaker across from a natural Dutch speaker who is with someone who speaks German, another who speaks French, and someone else who speaks Portuguese,” says Mauney. He also loves seeing CEOs sharing coffee with day laborers. In addition, the church has many young families as well as older individuals who pour their energy into the generation coming up.

Mauney is not hyper focused on the future. In fact, he feels that one of the Devil’s greatest tricks is convincing us to never enjoy the stage of life we are currently in so that we remain in a constant state of dissatisfaction.

“If you were trying to disrupt the potential of a group of people, you would trick them into believing that their blessing is always in the next season so that they would insist on living their entire life one season behind the blessing,” he says. That’s precisely why he celebrates where the church is right now.

“We are in our blessing,” says Mauney. “We’re exactly where we need to be just helping people take a step closer to Christ.”

For some that step might be joining a small group. For others, it may involve talking to someone about something they’re struggling with. Or it could be getting their first Bible.

“If a step is a guy downloading the Bible app, I’m OK with that,” says Mauney. “Because if he continues to take such steps, in 30 years he’ll be one of the great leaders in the church.”

From Outreach Magazine  What to Do When Unexpected Hurts Hit