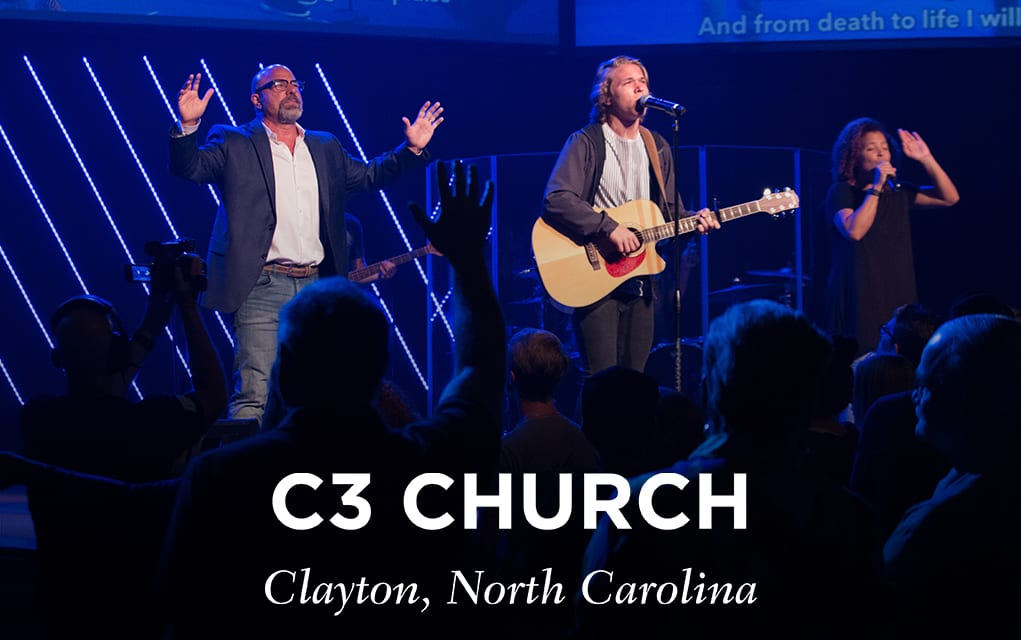 Doug Haan was at a breaking point when his sister invited him to C3 Church in Clayton, North Carolina. A life of partying in college had turned into a battle with alcoholism as a way to fill the void in his search for happiness.

“I got to the point where I just couldn’t fill the craving anymore,” Haan says. “But the first time I walked into C3 Church, I felt like I had a spiritual experience. That was the day I was saved.”

Haan says that the authenticity of the people and pastors at C3 made the biggest impact on him because it was clear from the beginning that they were all there to support each other.

“That first sermon, he was talking about hope, and I was running out of it. After being at C3, I had the tools that I needed to walk away from alcohol.” And he did. Three years later, Haan is still sober and owns a gym in the area.

Lead Pastor Matt Fry says Haan’s experience is similar to what he hears from other people who are drawn to the church—that they feel welcomed and supported.

“People say we’re really authentic—that we’re real,” Fry says. “They can relate to my sermons. They can understand, identify and apply God’s Word to their lives.”

But Fry attributes C3’s recent growth to a healthy church. Finding synergy, empowering leadership, being a family and building each other up have been the biggest factors behind the growth, Fry believes.

He abides by what he calls the “80 percent rule”: If the staff can accomplish 80 percent of what a pastor would normally do according to the church’s vision and values, then he can be OK with accomplishing the remaining 20 percent.

“When you empower people, they have gifts they didn’t realize they had. You just have to give people a chance. And you start to realize the gifts they have too and can use them in other ways,” he says.

From Outreach Magazine  Are We Online Atheists?

But changing the church culture can be a learning curve, Fry says, because it’s a big switch to build confidence in your leaders and give them permission to come to the pastor with solutions instead of problems.

“People were really wanting to hit the bull’s-eye and were afraid to come up with their own solutions,” he says. “Nine times out of 10 I’m going to use their solution because they’re closer to the problem.”

In addition to empowering others to lead well, Fry notes that another shift in focus at C3 was looking for new and creative ways to serve others.

“One of our strengths as a church is to serve the community, and we sort of put that back on the front burner. Just getting out there and being the hands and feet of Jesus,” he says.

In harmony with their vision, “Real Hope for Real People in a Real World,” the church planned a month of serving various groups in the community. One week the congregation helped mothers at the local crisis pregnancy center. The next week they reached out to first responders in the area. The third week they gave care packages to teachers and principals at sponsored schools. And the fourth week they distributed a book Fry had published to military personnel for encouragement.

C3’s connect groups are also highly involved in the serving the community, whether through volunteering at a local rescue mission, area Boys & Girls Clubs or other local resources. Fry says that this high level of involvement raises awareness about the church, too.

Since Haan turned his life around and began attending C3, he discovered that his love for helping people get physically healthy has turned into a desire to help people become spiritually healthy as well. He not only leads a recovery group at church, but he also leads one at his gym.

“C3 is not a place where people are going to feel condemned or judged. They support each other, and that’s why I love it,” Haan says. “That’s why I tell people about it every day.”