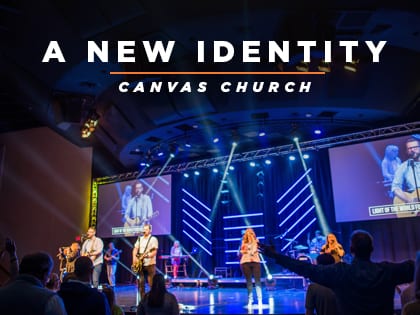 Canvas Church in Kalispell, Montana, has attracted plenty of unlikely visitors over the years.

Lead Pastor Kevin Geer recalls one woman who feared her sins were so great that the water would burn her if she got baptized. Another person circled the church parking lot a few times before choosing a spot because the thought of stepping inside the building was terrifying. Geer also remembers one cowboy who didn’t exactly fit the label of prototypical church attendee.

“He took anger management classes,” Geer says. “He was one of the best cussers I’d ever met.”

But the man’s marriage was starting to crumble, and he needed help. Eventually, God began to soften his heart, and the man with the short fuse transformed into a gentleman.

“God restored his marriage, and he and his wife have both been baptized,” Geer says.

Now, they not only stand witness when others get baptized, but they hand out towels to new Christ-followers, as well.

As recently as four years ago, the church—which was called Kalispell Christian Center at the time—was failing to reach many newcomers. The 92-year-old church remained very traditional, featuring orchestra music during worship and a pew-filled sanctuary that harkened back to its early days.

By updating the music, removing the pews and changing its name, Canvas Church was able to reintroduce itself to the community.

“We got healthy,” Geer says of the reorganization.

Canvas also committed to becoming a multigenerational church and, as such, now reaches out to young people, couples with children and seniors alike. Families and elderly people make up the two fastest-growing groups at the church. Geer says he finds it particularly surprising that Canvas is making converts out of so many senior citizens.

“We have baptized more older people, aged 60-plus, who are just falling in love with Jesus after being dechurched and rediscovering Jesus,” he says.

Being located in Montana, the church also sees its fair share of rugged cowboy types. During services, Geer says such men can be found sitting beside white-collar transplants from California, a reflection of the church’s broad appeal.

Canvas doesn’t focus on new programs to attract visitors but instead encourages guests to be an integral part of the community.

Joshua Rosales began attending Canvas a year ago. He’d recently been released from prison and struggled with many personal issues. As he worked on a construction project at the church, Rosales decided to walk inside. That’s when he encountered a pastor who listened to the challenges he faced.

The exchange with the pastor led him to have an epiphany: “Through everything, I’ve never been alone,” says Rosales, 33. After the meeting, Rosales says he felt like he’d found a church home because the pastor had counseled him when he needed reassurance and couldn’t turn elsewhere.

Now Rosales volunteers at the church as a greeter to show his gratitude and commitment to Canvas. Last summer, he was both baptized and married there.

“It keeps getting better and better,” Rosales says of his life today. “Now, I carry myself with a smile on my face, and it shocks people. I feel good about myself.”

A father as well as a husband, Rosales says he now serves as the spiritual leader of his family. Geer has seen such scenarios play out repeatedly.

“We’re seeing men getting saved and going home and bringing their influence on their wives and children,” Geer says.