Home Ideas Illinois Church for the Deaf Reaches the Unreached 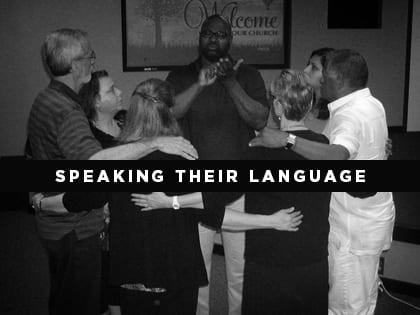 “The deaf are off the radar of most church leadership, and shouldn’t be,” says the Rev. Little Tom Jackson.

“The deaf are off the radar of most church leadership, and shouldn’t be,” says the Rev. Little Tom Jackson.

Jackson, lead pastor of Oak Brook Community Deaf Church near Chicago, laments that assertion because, he says, this distinct populace is the world’s third most unreached group. “And there are more than 25 million deaf and hard-of-hearing in the United States,” he adds.

Churches that do have a heart for the deaf typically provide sign-language interpreters during a Sunday morning worship service or weekday Bible study. That’s better than nothing. But rather than translating oral content via word equivalents in sign language, Jackson says, “the deaf prefer to have a deaf person to sign the meaning.”

Why? “They’re a distinct group of people,” says Jackson. “The deaf don’t feel they can be involved in hearing church ministries, because they can’t communicate with them nor vice versa. They have a separate language and culture, like English and Spanish are distinct.”

Ironically, Jackson—known to his congregation as Pastor Little—is not deaf nor does he have relatives who are. In 2002 he felt the pull of the Lord to learn American Sign Language. He began volunteering at Oak Brook, a small body of about 50 members that was established nearly 25 years ago. In 2011 he was called to be its pastor.

Jackson focuses on discipleship. “I train a core group of leaders who later train others to become leaders and so on,” says Jackson. “We encourage members to become ministers. We want them to reach out to other people who are deaf.”

From Outreach Magazine  How God Preaches to Us—and Through Us

He said a few members have been licensed to preach via the Assemblies of God, with which Oak Brook is affiliated. His hope is for new churches to be planted. “We need to help the deaf gain the confidence to reach out to other people who are deaf.”