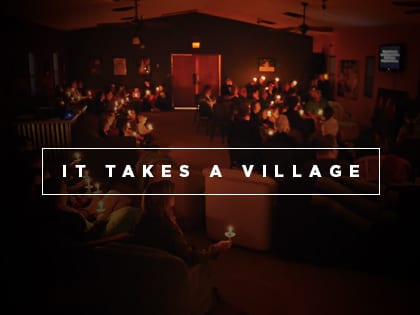 The Village Church in Tucson is a self-described “neo-monastic, mega, house-church.”

Churches, like people, come in all shapes and sizes. And they all “do church” a little differently. But The Village Church in Tucson, Arizona, does things a lot differently.

A self-described “neo-monastic, mega, house-church,” The Village is tucked in to a building on a quiet residential street. The building isn’t a house, but it’s set up like one. Every Sunday service includes an evening meal, music and fellowship. The kids make messes in the kids’ rooms, and families gather around backyard picnic tables. Most members have a key to the building and stop by throughout the week to clean, cook or just visit.

That’s where the neo-monasticism comes in, and it’s a lot like what St. Patrick is speculated to have done in the fifth century. The missionary is said to have established monasteries inside communities rather than in remote areas. That encouraged outsiders to participate.

“That’s the picture we have,” Cepin says. “As people join us, we invite them into the larger family, regardless of where they are on their journey toward Jesus.”

Though the church is anchored by a liturgy that includes reciting the Apostles’ Creed and the Lord’s Prayer each service, it still functions very organically.

In fact, most of the 120 members have come to the church that way. They know someone who already attends; someone refers them there when they don’t feel comfortable in more traditional churches; or they come across the website.

“We don’t do traditional outreach. It’s all based on relationship,” the pastor says.

It’s an unusual blend of the early church and postmodern Christianity, in which they strive to engage people authentically and disciple them holistically.

From Outreach Magazine  The Story Behind 'The Shack'

“If you’re going to follow Jesus, you’ve got to follow him every day and in every dirty little part,” Cepin says. “We’re all pretty blunt about our own brokenness. We definitely talk about repentance, but there’s an acknowledgement that we don’t have it together. We need Jesus to transform us.”

The church is honest about its members’ struggles. Their motto, Healing the city one person at a time, reflects that. Many members have battled abuse, drug addiction or mental illness. One church leader is even autistic.

That’s the authenticity. The holistic part comes partially by incorporating members’ creativity and experiences into worship and teaching. Members write all of the church’s worship music and contribute photos and poetry, and The Village writes its own discipleship material based on what’s needed.

“It’s allowing the community to write its own story with God instead of us saying, OK, this is how it is, and these are the forms we’re going to use to worship and engage God,” Cepin says.

“There’s a flattening out of authority and the allowing of the community to shape the way they worship God.”

That flattening out means members often minister to each other. Cepin’s professional background in mental health makes him ideal for pastoring The Village. But he encourages members to help each other, too.

“We do a lot of training on how to walk with each other,” he says, referring to Pilgrim Groups, where men and women separately meet to study Scripture and help each other through tough spots. “They do really well at it.”

The church makes another challenging request of its members: to really claim their faith as their own.

“The way society is changing, we have to decide if we want to follow Jesus wholeheartedly,” Cepin says. “Culturally, Christianity is being removed, so now we have to own it. Am I going to live it out the entire week? Am I going to take discipleship seriously? In everything we do, we try to be honest and authentic and point to Jesus as much as possible.”