Home Ideas Made Possible Through Faith: The Bridge Church 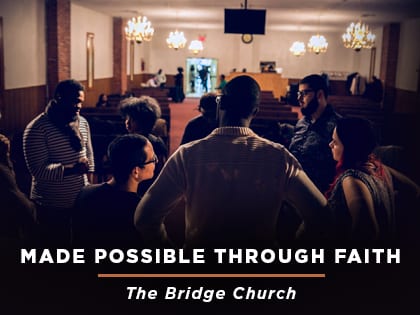 “The launch of The Bridge Church was a great journey—made possible through faith in our incredible God.”

The launch of The Bridge Church was a great journey—exciting, challenging but rewarding, and made possible through faith in our incredible God.

I was born in a Christian home, and my father, who was once an atheist, came to Christ and became an assistant pastor at a church. Growing up, I knew Jesus could help me, but I didn’t understand the concept of sin and the justification for why I needed a Savior.

In college I served a god named “football.” I tried out for the NFL with the Chicago Bears, but got injured. Afterward, I spent a lot of time at home recovering and became engulfed in the darkness of depression. My heart yearned to learn more about life, and ultimately, the Holy Spirit revealed that it was Christ my heart was longing for.

On Feb. 23, 1998, I felt the conviction of my sin by the Holy Spirit and I cried out to God, asking him for help. Soon after, God led me to a Bible study on my college campus. What really drew me deeper in community was how honest the participants in this Bible were about their sin and how appreciative they were of their Savior. Through this, I gained clarity of the Scriptures and began sharing my testimony and leading Bible studies.

This was the beginning of God forming a pastor’s heart within the chest of a man now captivated by the love of Christ.

I was a part of a pastoral team at Blueprint Church in Atlanta, Georgia. My wife and I had just given birth to our second daughter and lived comfortably in a five-bedroom house in Atlanta, Georgia. Soon, I went on a mission trip to Africa and came to the conclusion that I needed to plant a church in a place where there were not many churches, but where people were hungry for the gospel of Jesus Christ.

The electricity constantly went out during my stay in Africa, and while I lay under a net (in great efforts to not contract malaria) in bed and in darkness, I prayed to God and became convinced that he wanted me to reach people and continue to preach.

Soon after this, a friend suggested that I check out Brooklyn, New York, and so I decided to take a trip there in December of 2011. Although I grew up in the New York metropolitan area, I had never been to Brooklyn. I knew that Brooklyn was a really rough part of New York City, and I wasn’t convinced I could have an impact in a place that was known for its high crime rate, murders and gang activity.

From Outreach Magazine  Try This: Care for College Students During Easter

During my visit, I discovered that Brooklyn had been gentrified and drastically changed. In addition, there were people who were hungry for the word of God, just like I was in college. I felt a conviction in my heart, and in that moment God made it clear that my family and I needed to move. In response to God’s prompting, we moved to Brooklyn in February of 2013.

When we arrived in our new city, we didn’t know a soul. But we did know that the first thing we needed to do was create a core team. For the next several months, I spent spent my days walking up and down the streets, trying to meet people. I called friends and family members in an effort to build some momentum.

Soon, I met a guy named Rich Bowman, who said he hadn’t been to church in awhile and wanted to be part of the church I was starting. I met with Rich and his wife, Emmy, who was pregnant at the time. We discussed parenting and plans for the church. My family and Rich’s family became very close friends.

During this time, I felt that a Bible study would be a great way to start building momentum. One day, while walking down Fifth Avenue in Brooklyn and praying for doors to open, I called a friend on the phone. My friend said, “There’s a guy named Danny who lives in Brooklyn, and I don’t know where he is, but he will connect you to the people you need to know.”

Initially, there were just five or six people who attended the Bible study, and they were all Rich and Emmy’s friends. One day, I invited one of these friends out to lunch and asked, “What would people who don’t come to our Bible study be interested in?” They answered, “They all struggle with love, sex and dating.”

From Outreach Magazine  Doing Whatever It Takes to Reach the Lost

In response, we created and promoted an event called, “Everything You Need To Know About Love, Sex, and Dating.” About 120 people showed up—and that changed everything. This was another win for The Bridge Church, and shortly after, the Bible study went from five people to 40 people. These 40 people became part of our launch team, and The Bridge Church officially launched on Apr. 20, 2014.

Other challenges include the financial cost of living in NYC, transportation, weather and small meeting spaces. Many of the leaders in our community work in vocations that they dedicate a lot of their time toward, because rent in NYC eats up 55 percent of a resident’s income, on average. Overcoming these challenges requires a lot of creativity, which God specializes in.

I noticed that NYC is filled with disconnected, young urban professionals that grew up in Christian churches, but those churches speak in a native language they do not understand or use old methods that do not effectively communicate the gospel to millennials. I’ve found that this key demographic tends to feel like the church is culturally irrelevant to them. The Bridge Church has been able to capture that crowd. The average age at the church is 25, and 75 percent of the church is single.

Launching a church is an exciting process, and the one thing that has surprised me the most about this process is God’s provision of people who helped make it happen. I believe that everyone in the body of Christ has a gift can be a dynamic benefit to the church.

Future plans include two new sites in the Flatbush neighborhood of Brooklyn and at Long Island University’s Brooklyn campus in September of 2017. Our mission is to connect to God, grow with family and serve our city.