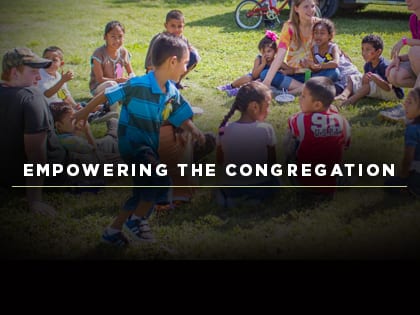 Sandy Hook UMC in Columbus, Indiana, has an impact that far exceeds its size. The secret? Decentralized funding.

For the past three years, the leadership and congregation at Sandy Hook United Methodist Church in Columbus, Indiana, have been on a mission—to prove that you can’t outgive God. As such, in 2015, the church of about 200 people gave away close to $100,000 for various outreach projects, local and global.

And several of the ideas for these outreach projects didn’t come from leadership, but from people in the congregation.

“Every month at our church council meetings, we open it up to the congregation to step forward and say, ‘I have a ministry idea. Here’s how much money I need to do it,’” says Jason Hyer, former director of mission and outreach at Sandy Hook, now lead pastor of Christiansburg United Methodist Church in Columbus. “It’s basically a blank check.”

One of the church’s most recent projects involves caring for domestic abuse victims and their children. According to Senior Pastor Steve Russell, victims can typically spend 30 days at a domestic abuse shelter before they are left on their own. The church has committed to helping victims get back on their feet once those 30 days are up.

The idea for this project came from a female volunteer at the church, who now heads up the initiative.

“Some real ministry is starting because people no longer see the roadblock of money as preventing them from taking the first step,” Hyer says. “We’ve shown them, ‘Hey, if you need the money, you can’t use that as an excuse. Here’s the money.’”

Russell can’t recall church council ever turning down someone’s idea. As long as the member is passionate about the idea and committed to leading the effort and making it successful, the church will approve it.

“The bottom line on our vetting process is, we look each other in the eye and say, ‘Is this prayed up?’ and, ‘How passionate are you about this?’ and, ‘Are you going to be involved enough to make this work?’” Russell says. “And then we will fund it.”

Sandy Hook hasn’t always had this kind of financial flexibility. Until three years ago, the church had been paying off a “major building debt” that tied up a large percentage of its finances, Russell says. Once the building was paid off, the church found itself with some extra money to invest in outreach.

“We now have what we call our ministry and mission fund,” Russell says. “We’re trying to avoid putting any money toward bricks and mortar, and hoping to invest in people and ministry projects away from the church building.”

On a global level, the church recently gave $8,000 to fund a sawmill in a remote area of the Democratic Republic of Congo. Because of the mill, five United Methodist Churches in the area now have roofs. Russell estimates that 5,000 people will hear the gospel for the first time because of the shelter the new roofs provide.

“We’ve seen pictures of people filling up a new building with a roof on it, and then people standing four and five deep around the windows just to hear the gospel,” Russell says.

Locally, Sandy Hook has recently begun a partnership with Grace Chapel, a Korean United Methodist Church in Bloomington, Indiana. Last fall, Russell and Hyer learned that Grace Chapel’s pastor, Daeki Kim, and his family were living in a parsonage that required some major repairs, to the point that it was “basically unlivable,” Hyer says.

Almost immediately, Hyer brought a team of volunteers to the parsonage, where they made some temporary repairs, like fixing the heating system, killing mold and getting rid of water in the basement. Sandy Hook, the Indiana Conference of the UMC and the conference’s Southeast District are currently partnering to see that this important project—building or finding a new home for Pastor Daeki and his family—is accomplished.

While helping Kim with his home, Russell and Hyer learned about a significant college outreach happening at Grace Chapel. While the church has 30 or 40 people who attend the primary Korean service on Sundays, a second and third service draw 200 to 250 college students from neighboring Indiana University every week. Following the first service, the 30 or 40 people go into the kitchen and cook a traditional Korean meal for all of the college students.

Believing in Kim’s vision for college students, the leaders at Sandy Hook decided to cut a check for about $3,000, covering several months worth of meals at Grace Chapel’s college ministry.

“College students are a tough segment to reach,” Hyer says. “So to see a church that’s getting it right is pretty incredible.”

Russell maintains that when churches begin to shift their focus from building their own numbers to partnering with other churches and serving the community, “God seems to open up all kinds of fantastic and interesting opportunities.”

“You need to get beyond your individual ministry, and not make it about you,” Russell says. “When you stop worrying about nickels and noses, both of them seem to take care of themselves, both locally and globally.”

The pastor says Sandy Hook’s leadership team doesn’t “get too hung up” on whether freely giving away money to the congregation is too big of a risk. In fact, the church has begun advertising a new initiative to the congregation: On an upcoming Sunday, any family unit in the church can receive “a crisp $100 bill to be used for any ministry as they see fit,” Russell says.

“Every person in the church gets $100 with the strings attached that they have to go out and use it to reach someone who isn’t in our church,” Hyer says. “And they have to tell the story about what they did with it. They’ll write their story on a 3×5 card, which we’ll put on giant banners at the back of our sanctuary.”

“We’re really on a mission,” Hyer says. “The Korean parsonage is a part of it. It gave everyone the courage to say, ‘You know what? We don’t care if it costs $300,000 to build a parsonage in Bloomington, Indiana. We’ll find a way to do it.’ God is faithful.”