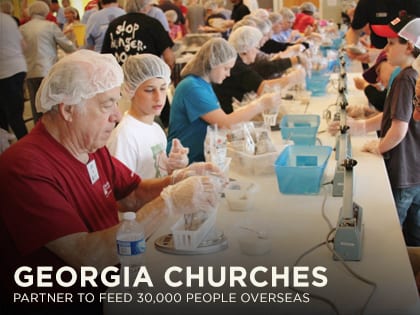 Volunteers from eight congregations teamed up with a local organization to package 30,000 meals.

Eight months later, before and after pictures show a filled-out Junior with healthy coloring, “an awesome story of success,” according to Chessney Barrick Pullen, communications director for Stop Hunger Now, the feeding organization contributing to Junior’s health.

Of such nutrient-rich meals sent overseas, about 60,000 in particular came together in a fellowship hall in Oakwood, Georgia, 50 miles north of Atlanta.

“They’ve got it down to a science,” says McEver Road United Methodist Church’s Rev. Rob Bruce of Stop Hunger Now, the program based in Raleigh, North Carolina.

An associate pastor suggested the project, so area churches raised about $5,000 for the food. Roughly 140 volunteers from eight congregations met with Stop Now workers, who arrived at McEver Road UMC—average attendance 180—with a loaded truck.

They scooped and weighed dried vegetables, rice and vitamins to an upbeat tune. “I did a bunch of Motown and funk, and people loved it,” Bruce says of the background music, a signature feature of the sessions.

He believes the system with designated runners looks like “organized chaos” to outsiders. But they packaged about 30,000 meals in the three-hour meetings in 2014 and 2015.

“It brings people together, and we really become the hands and feet of Christ,” Bruce says.