Home Features Should You Move to a ‘Better Suburb’? 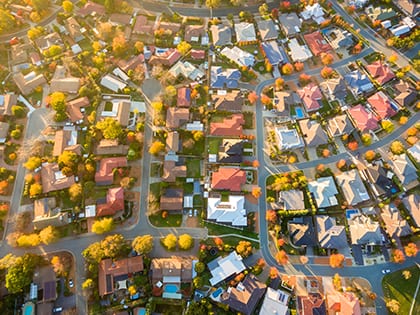 Jesus left the most exclusive gated community in the universe in order to come down and make his home in our midst.

I’ve been thinking a lot about moving house lately. We’ve lived in urban slum communities here in Cambodia for years (up until recently).

And the place we’ve made home for the past 18 months has a mixture of poor and middle class Cambodians (as well as one silly big mansion, right smack in the middle of us all).

But, as we sense a nudge from God to shift into another community about a mile away, I’ve been thinking again about this terrible phrase we hear—“moving to a better suburb.”

You might be thinking, why wouldn’t a God-fearing family want to move to a “better” suburb?

After all, upward-mobility is the norm—an unquestioned pathway in life for almost everyone. But should it be the no-brainer we make it out to be?

What if the assumptions that underpin this drive up and out are not altogether healthy or Christlike? In fact, what exactly do we even mean when we pronounce someplace a “better suburb”?

Allow me to pose a few questions that might help us deconstruct the meaning behind this phrase.

Is a “better suburb” one with fewer poor people? Does anyone ever use the phrase moving to a “better” suburb to refer to an economically more impoverished neighborhood? What happens when we become more disconnected from the struggles of the poor?

Is a “better suburb” one with “better” schools? What happens to a struggling school when everyone with resources chooses to flee as soon as they can? Will our children truly be better off immersed only among other wealthy or middle class families?

Is a better suburb one with fewer brown people? Or more people who look like and act like us? Does anyone ever use the phrase moving to a “better” suburb to refer to a more racially diverse neighborhood with immigrants and refugees? What happens when our communities become more and more homogeneous?

Is a better suburb one with less crime or violence? Perhaps, perhaps not. Did Jesus call all of us to a life of safety? (Certainly “fear of people who don’t look like me” and racial stereotypes can translate into a perception that crime rates must be higher in a certain place.)

Yes, there are some places that are simply too toxic, too dangerous, just too damn risky to live in—especially with children. But does that account for the massive drive towards “better” suburbs that we Christians have embraced?

My observation is that moving out of dangerously violent neighborhoods accounts for just a tiny percentage of the overall upward-mobility movement. If we’re brutally honest, it’s not the main reason why this phrase is so ubiquitous.

Instead, we are crazy-busy working our butts off so that we can trade this house for a bigger one, with a bigger mortgage.

If we’re brutally honest, we’re moving towards more affluent neighborhoods because they give us more status and comfort. And frankly, we’re drawn to places where the people look like us and have the same values and lifestyles, because that makes us feel more comfortable.

We have been seduced by the images sold to us by the media about what the good life looks like. And we are keeping up with the Joneses.

If truth be told, we have swallowed the lie of the American Dream hook, line and sinker.

But what if we look at the life of Jesus?—who left the most exclusive gated community in the universe in order to come down and make his home in our midst.

This is the Son of God who set aside comfort to deliberately seek out the disabled, the outcasts, the panhandlers, the folks with nasty diseases and spend time partying with them.

This is the Jesus we claim to follow who didn’t shy away from those on the margins and was often criticized for welcoming them to his dinner table.

What would a life following such a subversive Jesus look like?

It might look different from the way we were raised to think. It might mean more discomfort, occasional awkwardness (even fear) and certainly greater inconvenience.

But it would also mean richer relationships, a deeper connectedness to the needs of the world and more diversity.

So, here are three alternative visions to replace our obsession with moving to a “better” suburb. See what you think.

1. Some of us are called to relocate among the rich—specifically to call them to justice, mercy and simplicity. To challenge them to love Jesus in the distressing disguise of the poor. These missionaries among the rich need our support and prayers. They are called to practice what I like to call “reverse gentrification”—working to welcome the poor and marginalized into more affluent neighborhoods. They face the challenge of NIMBYism (Not In My Back Yard) more than anyone. But they pursue the kingdom of God on earth, in the midst of the world. Let’s be careful not to say they are moving to a “better” suburb. They are not better, just different.

2. Most of us are called to stay where we are—learning to love our neighbors and discovering what it means to be content, to decide that we already have enough. As we live lives of simplicity, justice and faithfulness to God, we will tie our wellbeing to the wellbeing of our neighbors. And when we are truly rooted in a neighborhood, moving somewhere “better” will no longer hold any sparkle.

3. Still others are called to relocate among the poor—to seek transformation with our marginalized neighbors. We pour our resources into these neighborhoods, rather than using our resources to escape. We also tie our wellbeing to the wellbeing of our neighbors. What happens to them affects us too, so we end up working together to overcome the brokenness and injustices around us. In the process, we draw closer to God who came to bring good news to the poor.

Surely, to counter what the world has to offer, we will need a newly invigorated Theology of Place. We will need to prayerfully choose the community where we live with the same intentionality we have previously used to select a “better” suburb.

So, the next time someone says they want to move to a “better” suburb, ask them what they mean. Ask them what makes a suburb “better.”