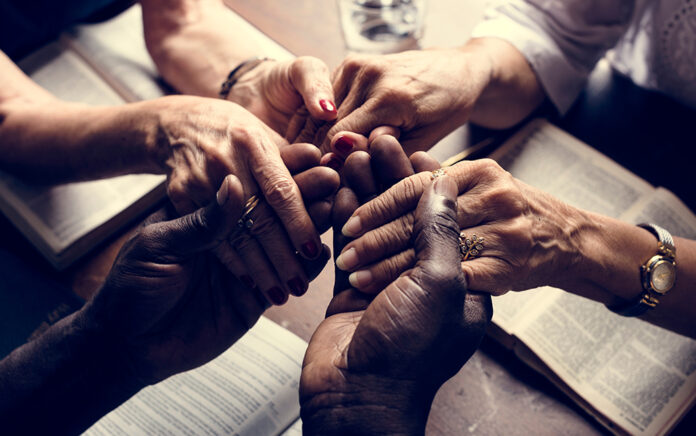 Jesus knew that the secret to real unity was prayer.

Dr. David Anderson planted Bridgeway Community Church (Columbia, MD) in 1992 where he continues to serve as senior pastor. On its website, the church describes itself as “a multicultural body of fully devoted followers of Christ moving forward in unity and love to reach our community, our culture, and our world for Jesus Christ.” In addition, Dr. Anderson is the founder and president of the BridgeLeader Network, a global consulting firm assisting organizations and corporations to address racial differences and develop proactive strategies to engage reconciliation and multicultural effectiveness.

For nearly thirty years, then, Dr. Anderson has not only been talking and writing about such things but he’s been an effective practitioner leading others to be one in the church for the sake of the gospel. In what follows, he shares the necessity of fighting on our knees against the schemes of the devil which seek to divide and keep us divided along the lines of color, class, and culture.

In the army, we were taught to stay together, watch each other’s backs, and be on the lookout for the enemy, who works overtime to set up sneak attacks and ambushes. During our training exercises, my platoon would spend the night sleeping outside in the woods. When it was time to sleep, soldiers who were paired up would sleep in shifts. One soldier would sleep in the tent while the other remained awake to keep his eyes open for enemy combatants.

It was imperative to trust that your partner would not fall asleep on the job while you were sleeping. After a couple of hours, we would trade places so that the one who was sleeping could keep watch while the other soldier could rest his tired eyes. We were taught that the enemy never sleeps.

The same is true about our spiritual enemy. Satan, the great deceiver and divider, works overtime to separate Christians, catch them while they are weak, worn, conflicted, confused, and, most of all, asleep. Just as Jesus’ friends dozed off when they were supposed to stay awake and pray for him while he was facing the most difficult spiritual and emotional battle of his life in the garden of Gethsemane, we as believers have been lulled to sleep while the Enemy prowls around like a roaring lion. As brothers and sisters in Christ, we are called to watch each other’s backs at all times, but especially in prayer. When we are careful to cover each other and stay unified against our common enemy, we find less time to argue and divide over our differences regarding race, ethnicity, denominational preferences, and the like.

When believers from every background begin to pray together, an undeniable unity emerges that elevates the spirit of oneness and diminishes the spirit of division. The enemy cannot fight effectively against a collection of believers who are more determined to “pray … all kinds of prayers” (Ephesians 6:18) to fight against the principalities and spiritual forces of darkness that desire to stir up dissension and ethnic division.

Since this was the longest recorded prayer of Jesus in the Bible, isn’t it fascinating: in it, he prayed for desegregated unity. How much more, then, should we follow his example in our prayers and practice?

Jesus knew that the secret to real unity was rooted in prayer that transcends the distinctions of this world that otherwise divide. Those who pray and practice their faith in unity across racial, ethnic, and denominational lines touch the heart of heaven. When we pray together across such human boundaries, we are joining Jesus in praying, “Thy kingdom come, thy will be done on earth as it is in heaven.”

Indeed, many talk a good game about racial unity. But the real question is, are we willing to fight for Christ-centered unity on our knees?

Share on FacebookShare on Twitter
From Outreach Magazine  The Next Christians: The Good News About the End of Christian America