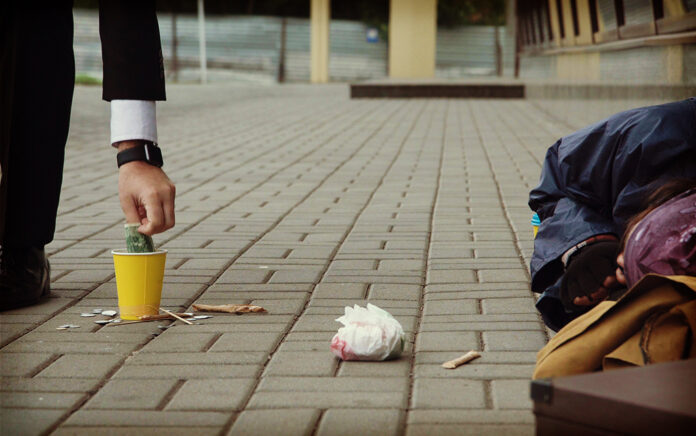 The unexpected joy of giving alms to the poor.

Lisa and I had just landed at the Philadelphia airport after midnight after a long, cross-country flight.

We were tired and waiting outside to be picked up by the Extended Parking Lot van to take us to our car when suddenly a homeless man quietly approached me and asked if he could have a few dollars.

When I said, “I’m so sorry. I don’t have any cash on me,” he hung his head and walked away.

“What did he want?” Lisa asked.

“He wanted a few dollars, but my wallet is literally empty.”

Within seconds—with luggage in tow—Lisa was running from Terminal B to Terminal C—literally chasing the homeless man while waiving a 10-dollar bill in the air.

Our ongoing task as disciples is to live like Jesus meant every word he taught in the gospels.

But we don’t do so grudgingly. Obeying Jesus is always an adventure.

As William Barclay said, “Jesus promised his disciples three things—that they would be completely fearless, absurdly happy, and in constant trouble.”

This explains why Lisa ran down the terminal like a giddy 3-year-old.

Jesus was talking about giving alms—taking your small bills and change and freely giving them to the needy when you encounter them.

Here’s How We Do It

Whenever I get groceries, I always get $60 cashback from the cashier and tuck those bills in the corner of my wallet and consider that “money for the poor” and look for opportunities to bless people in need.

We started doing this by giving away $5 bills and increased the amount over time. You may start with giving away $1 bills to people or much more. Over the years we’ve increased it to $10 a person.

I think you’ll know it is the right amount for you when it hurts a little bit to give it away. For you, $10 may not be a lot of money. But it is for us. For you, giving away $100 per person may be the right amount. Or $1 per person. There’s no predetermined amount set by Jesus for each person to give away.

For years I told my daughters that we didn’t give money to street people because they would buy alcohol with it, and that there are all kinds of shelters helping people in need, and that those shelters have a way of vetting people who are trying to game the system.

Jesus didn’t set forth certain conditions for giving alms. He just said to give them.

Almsgiving is a sign of God’s inbreaking kingdom, where the last shall be first, and in that realm, people aren’t asked why they got into the situations they find themselves in. They only experience compassion.

I think one of the biggest things we’ve learned through almsgiving is that our hearts have become bigger and softer towards those who are hurting.

It’s fun for me to give money to a staff member and have them give it secretly to someone in need during church services and watch their expression from afar.

We’re consciously looking for people in need. I never did that before.

When I notice this designated money has sat in my wallet for too long, I realize that I’m being too inwardly focused. Almsgiving has become a healthy gauge for the softness of my heart for the poor.

I’m having conversations I never would have had otherwise. Talks with good people who are facing difficult times. People that we could have easily switched places with given the right circumstances.

Almsgiving Is a Lot of Fun

Finally, Lisa and I have a blast doing this.

Just yesterday at lunch Lisa decided to give an extra $20 to the precious lady who owns our favorite breakfast place who had to shut down because of flooding caused by Hurricane Ida that ripped through our area.

Just an hour before that I gave my entire $60 to an usher at church, who in turn gave it to a man who lost his car in the same flood (without revealing it was me that gave it).

Did those gifts completely change their circumstances? Of course not.

But it did communicate that they were loved.

Trust me. William Barclay was right.

It makes grown men cry when they put their arms around hurting strangers and causes grown women to chase down the homeless at the airport at 12:35 a.m. like Usain Bolt.

From Outreach Magazine  What Italy Showed Me About the Coronavirus

This article originally appeared on BrianJones.com and is reposted here by permission.