Home Features How to Lead When Everyone Seems Divided 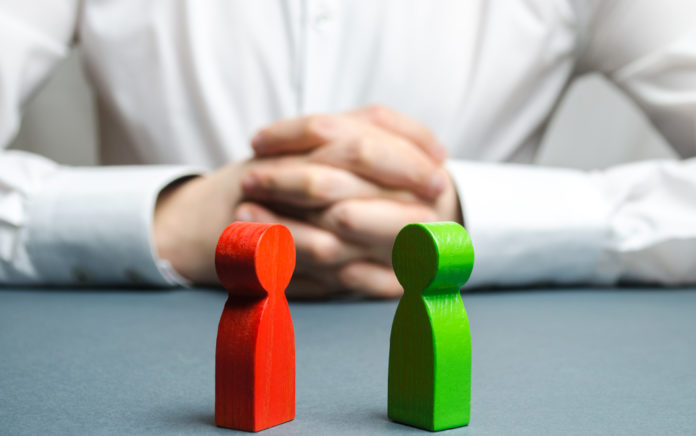 This is probably one of the hardest seasons you’ve ever led through. One of the things that’s making this season particularly challenging is that, regardless of ideology, theology or viewpoint, we are more divided and adamant than ever. People don’t agree on masks, social distancing, schooling, reopening church, online church politics or whether there’s even […]

This is probably one of the hardest seasons you’ve ever led through.

One of the things that’s making this season particularly challenging is that, regardless of ideology, theology or viewpoint, we are more divided and adamant than ever.

As one lead pastor told me recently, “There used to be two options. Now it feels like there are four or five, and no one agrees with anyone anymore.”

The longer this global disruption goes on, the more entrenched, fractionalized and divided we seem to get.

And, of course, now that this is not just a blip we got through in a few months, the divisions externally are showing up more clearly internally, at the board, staff, congregational and team level.

Want to know why leadership is hard? Because you take people to where they wouldn’t ordinarily go if it wasn’t for your leadership.

Obviously, there is no single, easy answer for this, but I want to share a few approaches that have helped me when things have felt divided.

1. Bring It All Back to the Mission.

On a good day, the mission of your church is your best friend. On a bad day, even more so.

The challenge with division is that the mission gets lost.

Your job as a leader is to remind everyone why you’re doing this in the first place. Sometimes, you need to remind yourself why. I know I do when things get chaotic and challenging.

The good news for the church is we have the best mission in the world. And chances are, somewhere in your mission, it mentions love.

Of the three main questions leaders deal with—why, what and how—only why unites. How and what divide (what are we doing and how much will it cost?), while why unites (we’re all here to reach people).

The challenge is that when things are fractious, people always want to talk about what and how. Hence the endless debates about whether to open/reopen, masks, distancing, online, etc.

That’s when the best thing you can do as a leader is pull the conversation back and elevate it to the level of mission.

Let’s think for a few minutes about why we started the church.

Everyone take a minute and pray for someone you know and love that we’re trying to reach.

One of the best things about this place is your deep commitment to Christ and reaching people.

What’s one of the greatest things you hope God will do over these next few months?

A good general rule is to talk about why twice as much as you do what and how. In a crisis, you may want to double or triple that ratio.

2. Highlight What You Agree On.

When things get really tense, the conversation almost always goes to the one (or five) things you don’t agree on. Just rehearse any argument you’ve had with your spouse if you’re looking for a case study.

When the conversation moves in that direction, redirect it to highlight what you agree on. And by that, I mean be specific.

Some of that will definitely be mission-focused (see Point 1 above). But you can get more granular than that.

If you’ve got two team members arguing, shift the focus and remind them they both like volunteering, or are committed to helping the poor, or football, or pizza, or photography or anything that puts them back on the same page.

Focusing on the common interests people have in the group humanizes each other.

Another approach is to take people back to a moment when everyone was on the same page—at an offsite two years ago where you had that amazing dinner, or when you opened that new location and everyone rallied together.

Starting a conversation with, “Wow, I’d love to see us find the kind of unity we had in 2018 when we …” can be a great way to get people off whatever they’re upset about and remind them of what’s bonded them together.

Your job as a leader is to focus on what unites your team, not on what divides it.

The mission unites, but so do common interests and shared experiences.

3. Separate the People From the Problem.

Almost every leader has said, or thought, that leadership would be so easy if it wasn’t for people. Except, of course, leadership is the art of leading people.

One of the best things you can do, as Roger Fischer, William Ury and Bruce Patton of the Harvard Negotiation Project argue, is to separate the people from the problem.

You’ll be tempted to think people are the problem, but separating people from the problem is a key to making progress.

Rather than saying, “I can’t believe you’re opposed to wearing masks,” you might say something like, “Wow, I can see you have strong views on masks. Here’s our challenge … we want to reach more people and the government (and our sense of what’s best) says to wear them. How can we work through this together?”

In this reframing, the problem isn’t the person, and it isn’t even masks anymore. The problem is how we’re going to work together to reach people. By focusing on the problem, you’ve made yourself an ally of the person and an opponent of the common problem.

Will that work 100% of the time? Nope. Some people you just can’t reason with. But you can’t build the future of the church on them anyway.

Will the strategy work more than shouting at people and starting sentences with, “You always …” or, “I can’t believe you would …”? Yep. It will.

4. Focus on Interests, Not Positions.

This is another principle I’ve used again and again from the Harvard Negotiation Project, but it’s so helpful: Focus on interests, not positions.

Here’s an example. In my first five years of ministry, our quick growth at three small churches that shared a pastor (me) pushed the limits of some historic buildings we were in. The buildings dated to the 19th century, and let’s just say there were long traditions and opinions associated with them.

The proposal was to sell all three buildings, merge into one church and meet in an elementary school and then build a new facility a few years down the road.

Naturally, not everyone agreed.

The key to making a change that deep was refocusing everyone away from their positions (for or against) and toward our shared interests (creating a church their kids and grandkids would want to come to).

The more I focused everyone on the need to reach our community and create the kind of church their kids and grandkids would want to come to, the more progress we made. I also pointed out that the alternative to progress was closing or dying, and nobody wanted that either.

Because we shared the interest of reaching people, we got past the positions of for and against. We sold the buildings, moved to the school and a few years later moved into a new facility we built together.

Notice how all four points in this article so far build on each other?

Your job as a leader in divided times is to be the chief unifier.

Leaders who can’t unify their teams eventually have no teams, because division tears apart what unity brought together.

You know that garbage in produces garbage out.

So does division. Division in will ultimately produce division out.

If your definition of Christianity is full of hate and divisiveness, it’s not Christianity.

Social media, and media as a whole, is so inflamed right now that it’s probably not helping you to find any kind of peace, let alone forge unity.

I haven’t watched TV news in years (I read my news instead). I’ve muted and unfollowed more than a few leaders on my social media channels this year, largely because they seemed to enjoy fighting with anyone who came along.

I haven’t created a homogenous universe where everyone agrees with me. I intentionally follow people and discussions that I don’t agree with (as well as some that I do).

But the question I ask is whether the channel I’m watching or leader I’m following is trying to make it better.

Maybe one of the reasons you feel so conflicted and deflated inside as a leader is because the people you follow are trying to divide and deflate people.

And if that’s not where you want to land, I’d encourage you to unfollow them. Mute them.

And fill your feed, not with fluffy stuff or echo chamber material, but with real people who are trying to make a real difference. I’m guessing that’s what you got into leadership to do. I did.

There are still some good people out there. Follow them.

Making your social media feed a place where the good gathers on the internet will help you create more good with the people you lead.