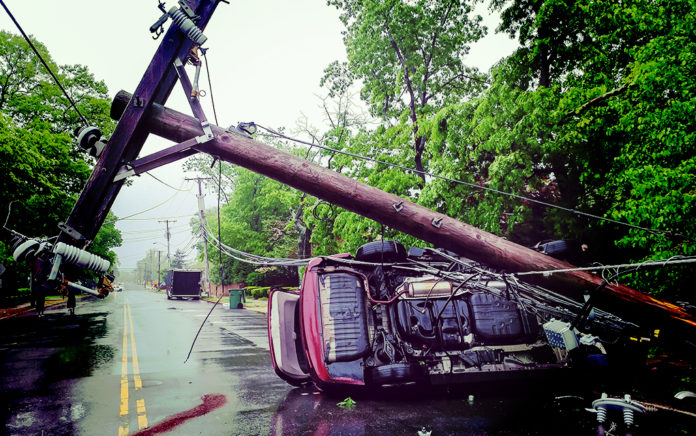 Easter Sunday was a beautiful day in Chattanooga. We had our services in the morning and my family enjoyed a wonderful lunch, and then relaxed the rest of the day, mostly outside, as it was so nice. The kids got into bed and I started watching the news because they were predicting that the weather could get bad.

Over the next 30 minutes we began to get text messages from friends. A couple in our Life Group texted our group to say that their house appeared to be gone. They had ridden out the storm in the basement, but the tornado had devastated their home. One of my daughter’s best friends texted to say that her house was completely destroyed. And the news continued to come.

By the next day we learned that the tornado was an EF3 with winds as high as 145 miles per hour, and it was monstrous in size—1,500 yards wide and a path that went on for 20 miles through some of the most populous neighborhoods in Chattanooga. In all, around 350 homes were completely destroyed and over 1,100 homes were damaged. That, of course, doesn’t account for businesses and schools and houses of worship that were destroyed or damaged.

The icing on the cake? All of this happened while the whole state was in a form of quarantine because the world was under assault due to the coronavirus. That made for an even more difficult recovery as we tried to navigate distancing and the like, while cleaning up hundreds of homes.

Whether it is a pandemic, or a natural disaster or some other form of difficulty, people become the focus over programs or planning or strategy. The goal during this time is to make sure that people are okay, to point them to Jesus and to make sure they know you care and are available to them.

I have worked more hours during this pandemic and tornado recovery than would typically be true beforehand. But that’s been a necessity as we have needed to rally around people and make sure they know the church loves and cares for them. As the visible expression of the kingdom of God on earth, and as the leader of that community, I am convinced that I have had to take extra steps to be accessible and to distribute the love and grace of God to others. This has required some thoughtful steps, because of the pandemic, but I’ve learned that phone calls, text messages, notes and availability on social media can go a long way to helping care for the community we have stewardship over.

Oswald Chambers once said, “Prayer does not fit us for the greatest work, prayer is the greatest work.” This is always true, but in a time of crisis, this is especially proven true. One of the best things we have done during this pandemic and natural disaster is to hold an online prayer time three times every week, at three different times during the day, so that everyone can find a time to join. We pray specifically for the virus and for the tornado relief, and then we take one another’s prayer concerns and pray through them.

In a time when it feels as if our control has been stripped away, and there is much fear in the unknown, we need to trust in God, and we need to model that trust. We can do that by leading our people in prayer more than in any other way.

This is tough. We have all done this to some degree or another over the last few months. But emergencies require that we set aside our plans and shift the way we do ministry.

As a leader, you are going to be scared from time to time. I had a meltdown moment earlier this week. I texted some of our leaders at the church, and a few friends, and told them I felt like I was coming to the end of my rope. Thankfully they encouraged me and prayed for me, and the next day I was back to my optimistic self.

Your people will feel much the same, but you need to be the person to point them toward hope. This will require a willingness to quickly pivot from previous plans to identify new and helpful ways to communicate and deliver the hope of Christ. Do so, and do so gladly, knowing God will use it.

The last thing I would say, and this seems so elementary, is that trusting in the Lord is paramount. Believing God is sovereign in the midst of a pandemic and a natural disaster is key to thriving in the midst of those things. It is not when things are well that we easily demonstrate our confidence in Christ, it is when the bottom falls out that our faith is revealed.

The day the tornado hit, our choir released a video of them singing a song called “I Will Sing Praise.” They had to record it remotely because of the pandemic, but it was beautiful, and it spread around the internet like wildfire. That evening, though, it became even more precious.

“No matter the storms that come my way.
No matter the trials I may face.
You promise that you will see me through,
So I will trust in you.”

When we released that song, we had no idea how true it would become just a few hours later.

There is no blueprint for leading during a disaster. I’ve tried to provide some things I’ve learned over the last couple of months, but every situation is going to be a little different. The thing that matters, and that matters the most, is that last priority—can you trust in him?