Home Features Seeing the Vulnerable Among Us 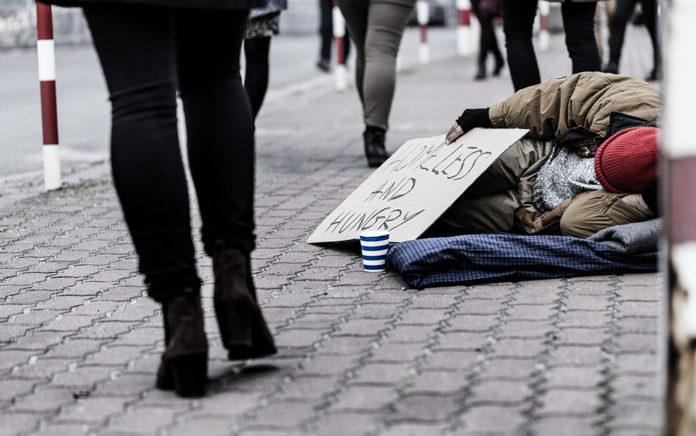 To help people, we have to truly see them.

“Religion that God our Father accepts as pure and faultless is this,” it says, “to look after orphans and widows in their distress and to keep oneself from being polluted by the world” (James 1:27).

If you’ve ever looked closely into the practices and parameters involved in the establishment of ancient Israel, then you know that when the nation was being organized under Mosaic Law, a significant number of their guiding principles had to do with caring for those in “distress”—namely, widows, orphans and the poor.

One practice, for example, was gleaning, in which farmers would leave the corners of their ripe fields unharvested, so that people in need could happen by and find grain to eat. This practice was not optional. It was required. God was serious about people helping each other out, especially those in need. And who were the neediest among the Israelites in that day?

When the nation Israel crossed the Jordan River, which runs through the valley between the Dead Sea and the Sea of Galilee, each of its tribes was given property. Inside that allotment of property, each family within the tribe was given part of the tribal land, land that was supposed to belong to that particular family forever.

Instead, after a father or both parents died, people with evil agendas would come to the widows and orphans who were left behind and re-boundary the property, essentially stealing the land from defenseless landowners. Dad was dead; what was Mom going to do about it? Or else Dad and Mom both were gone; how were their little children going to stop anything?

The laws that God had handed down were for the purpose of saying, “Don’t even think about touching those boundary stones. I am the Defender of those women and children, and I am telling you to stop.”

And defend those women, he did, making good on what Psalm 68:5–6 has to say. “A father to the fatherless, a defender of widows,” we read there, “is God in his holy dwelling. God sets the lonely in families, he leads out the prisoners with singing; but the rebellious live in a sun-scorched land.” Now, jump ahead to Jesus’ day and the immediate decades after, when the book of James was written. Again, our attention is drawn to widows … to orphans … and to those who are distressed in our midst.

Back then, in the Greco-Roman culture, there were no “orphanages” and no “retirement homes” or “nursing homes.” It wouldn’t be until the third century that Christians were strongly encouraged to adopt orphans and raise them to fear the Lord. And the first-generation nursing facilities, where elderly people could come and receive dignified care, weren’t established until the fifth century.

Therefore, as a key leader in the New Testament church, one of the primary issues James faced in his leadership role was how to care for the widows and orphans in town. Orphaned infants were tragically being abandoned en masse, while widows who didn’t have a family member to take them in were pushed to the street and told to make do for themselves. Most had no such family member, and so homelessness among widows became a pervasive issue in those days.

Acts 6:1 says this: “In those days [the days when the apostles were preaching daily in the Temple courts and from house to house, according to the end of Acts 5], when the number of disciples was increasing, the Hellenistic Jews among them complained against the Hebraic Jews because their widows were being overlooked in the daily distribution of food.”

In response, James and the other leaders organized a system whereby the widows would no longer be overlooked. “It would not be right for us to neglect the ministry of the Word of God in order to wait on tables,” they said. “Brothers and sisters, choose seven men from among you who are known to be full of the Spirit and wisdom. We will turn this responsibility over to them and will give our attention to prayer and the ministry of the word” (vv. 2–4). It was a solution that, according to verse 5, “pleased the whole group.”

You may recall an exchange from the scene involving Jesus’ crucifixion, during which he made sure that upon his passing, his mother would be cared for by his beloved disciple John.

Jesus’ father, Joseph, was never mentioned again after Jesus’ birth, causing most historians to believe that by the time of Jesus’ crucifixion, Joseph had been dead quite some time. And so, in his final moments before that agonizing and tortuous death, we find that what is top of mind for Jesus is one favored widow, his mother. He was determined to find her the care she would need, once Jesus had breathed his last breath.

WHEN OUR HEARTS BREAK IN TWO

The irony of James imploring all future generations of Christians to “look after orphans and widows in their distress” was that Jesus’ mother, Mary, was James’ mother too. It was James, not John, who should have stepped forward to care for her. It was James who was her son. Which means that either James was an outright hypocrite, or else he grew in his convictions after Christ had died.

I believe the latter is true.

James did not surrender his life to Jesus until after the resurrection, and it is my belief that once he had spiritual eyes to see things clearly, he experienced deep inner change. Finally, he saw how needy his mother truly was. Finally, he saw how he might help. It’s the same progression any of us must go through, if we ever hope to show up meaningfully in the lives of those in need. We must see the need … really see it … before we can begin to be of help.

I can relate to what James might have gone through emotionally, upon realizing his mother’s need. For me, the aha happened when I learned of a 9-year-old girl who lives in a neighborhood that New Life “adopted” several years ago. By partnering with those living inside this four-square-mile neighborhood, which is positioned in a less-resourced part of town, we as a church agreed to come alongside the members of that community to provide food, shelter, clothing, educational tutoring, spiritual direction and more.

From Outreach Magazine  When Your Life Is in a Holding Pattern

The little girl I mention was an elementary school student who had lost both her mother and her father and had no remaining relatives in town to look after her. For quite some time, as the “system” caught up with her, she would head down to the Salvation Army every day after school, where she would receive a meal and clothing. Eventually, staff there asked where her parents were and why she always came in alone. In response, she said, “My parents died. I don’t have a home. I don’t have a family anymore.”

She explained that friends of hers let her stay over at their houses each night, so that at least she’d have a place to sleep. She was an orphan in every sense of the word. Bouncing from place to place a mere 15 minutes south of my house.

Something about the proximity of this little girl’s situation got to me. I have a daughter. Imagining Callie roaming around a fairly large town as a fourth grader, having to cobble together outfits and meals hit me at a level that’s tough to explain.

That this girl’s situation had somehow gone unnoticed for so long was a wake-up call. How many others were in desperation in our community whom we weren’t seeing? Not only did we as a church redouble our efforts to show up in the lives of both that little girl and all of the residents of that struggling community, but I personally decided to show up, driving the 10 miles south to get out of my truck, walk those city blocks, meet as many people as I could meet and be a tangible presence in their lives.

That 9-year-old girl is my neighbor. And once I knew of her distress, I began to pray, “Father, somehow use me.” What that 9-year-old orphan must represent in our collective consciousness is anyone who is in distress. Still today, on a global scale the people who are most oppressed, most marginalized, most vulnerable and most at risk are women and their children. Perhaps because of the stubborn vestiges of the vast patriarchies that have always ruled the earth, it will always be that way. I pray not, but perhaps it will. In any case, when Scripture exhorts us to “care for orphans and widows,” what it is saying is that we must keep our eyes peeled for those who have no one to help them out.

Who is being pushed aside?

Who is being kicked out?

Who has been forsaken?

Who has been left for dead in a ditch?

That is the one we are called to go help … the one whose load we are told to lift.

This article originally appeared on Brady’s blog and is reposted here by permission.

A Crazy Idea That Will Increase Your Impact in Your City