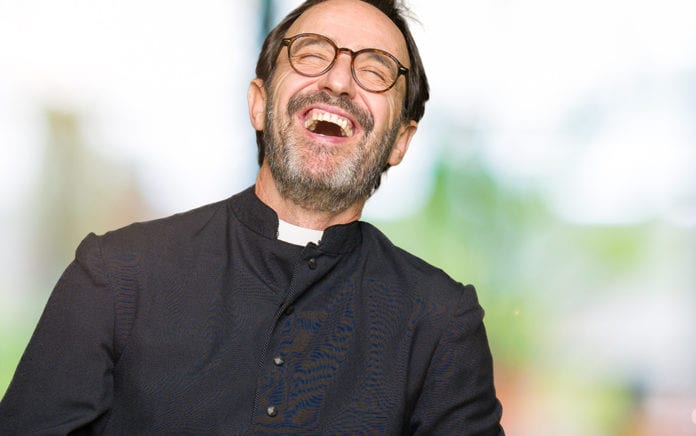 No one ever said that a pastor’s life is boring.

A month ago, I was preaching at College Church in Wheaton, Illinois. They gave me 30 minutes to speak and I always try to finish on time as a means of serving my hosts well.

The only problem is that the iPhone countdown timer has a very loud alarm when it hits zero. So, when I was just 10 seconds into my prayer, it went off. College Church is too dignified for me to stop, so—while still praying—I reached over and turned off my phone. I kept praying until I was finished and hoped no one looked up and thought it was someone else’s phone.

Thankfully though, I’m not the only one to have something distract me like that from the pulpit. I took to Twitter to ask some pastors and Bible teachers what sorts of distractions they’ve experienced while preaching or teaching and received an overwhelming number of responses. I’ve narrowed the list down to the top 20 stories and list the first 10 here in no particular order.

Believe me, after you read these, you’ll know it was impossible to pick just a few standouts.

1. A 5-year-old sitting in the congregation was playing with an iPad during the sermon. Somehow, my voice triggered SIRI and she responded aloud saying, “I do not understand what you are saying.”

2. One time, I tried to preach while sick with a stomach bug. The sound guy fell asleep and I walked off the stage, passed out and puked into a live mic. When I woke up, the personnel chair and the deacon chair were scrubbing the floor around me.

3. My young daughter escaped from her mother while I was preaching. She ran up to me and climbed inside the pulpit and stayed there for the entire sermon; while there, she proceeded to untie my shoestrings.

4. I was preaching a wedding and several minutes into my talk, I noticed the wedding planner in the back of the crowd. She was waving her arms and jumping up and down. I ignored her for a few minutes, assuming she was crazy. But, as it turns out, I had forgotten to have the congregation sit down.

5. My wife went into labor in the middle of my sermon. Apparently, she tried to hold out until the end but then the senior pastor came up and said to me, “I think it’s time to go.”

6. A drunken man entered the sanctuary carrying a baseball bat, hurling obscenities and threatening the pastor because no one answered his call to the office the day before. A deacon (with a black belt) approached him, shook his hand and asked if they could talk outside. Thankfully, the man complied. He was arrested and later the deacon visited him in jail and invited him back to church. Again, he complied. The church embraced him, prayed for him and he remained a regular attender until an untimely death a few years later.

From Outreach Magazine  How to Practice Personal Development

7. A 2-year-old got away from his parents during our Maundy Thursday service and ran up and gave me a hug while I was teaching. I stooped down, reciprocated, picked him up and kept preaching with the little one on my hip until the service ended. He was quiet and happy as a clam.

8. My father-in-law was preaching on Mother’s Day when slowly but surely, bugs began flying at him. Next thing you know, termites began flying and swarming. Everyone had to run to escape the building. When it was all over, the church looked like a blanket of snow on the inside.

9. I was preaching outdoors, and a dog walked up and proceeded to urinate on a monitor that was right in front of me.

10. One time, I was preaching on a Sunday morning and forgot to turn my cell phone off. It started ringing halfway through my sermon and I pulled it out to answer and said, “Yes, Lord.” After much laughter, I finished my message.

More later on the rest …

No one ever said the life of a pastor was boring.