Home Features The 5 Temptations of a Pastor 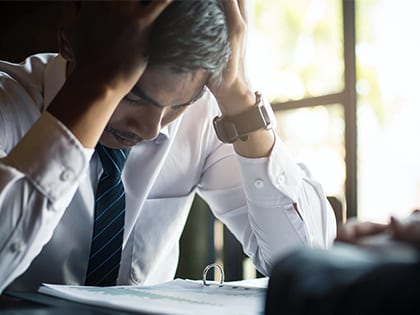 “Self-awareness is a gift. It can lead you to confession, repentance and a different future.”

You’d think that being in church leadership would ensure you’re not tempted to fall into the same temptations as, say, leaders in the marketplace.

As nice as that line of thinking is, it’s wrong.

A few years ago, Patrick Lencioni did a great job outlining the 5 temptations of a CEO. All of those apply to anyone in leadership, and Patrick’s books are always packed with helpful insights.

I think all of those temptations apply to any senior leader, but ministry adds a layer of complexity or two.

You and I are human. We are subject to the same temptations as anyone else.

Recognizing that we’re vulnerable to a whole host of temptations, pitfalls and set of issues is actually a good thing. Self-awareness is a gift. It can lead you to confession, repentance and a different future.

Denial is a different story. If you think you have no sin, or that these things can’t and don’t happen to you, well … good luck with that. I think there’s something in the Scripture that says those of us who say we have no sin deceive ourselves.

When it comes to temptation, denial is an accelerator. The more we think it will never happen to us, the more we position ourselves to have it happen.

I’ve struggled in different seasons with all five temptations. I’m not above any of it. But the good news is self-awareness is such a big factor in keeping yourself from making some very common mistakes.

If can you see yourself as you are, you can become a different self. Confession and repentance are powerful like that.

So here are the five temptations I see pastors struggling with:

1. To Choose Popularity Over Courage

Oh to be popular. While it’s the dream of every elementary and high school kid, it doesn’t make for a great leadership quality.

So many pastors, at heart, are people pleasers.

A key goal of leadership is to lead a diverse group on a common mission. That’s why leadership isn’t for the faint of heart.

Your job is a leader is to take people where they wouldn’t go except for your leadership.

That requires courage. Deep courage. But when you try to please all kinds of people, you usually end up sacrificing the mission.

Instead of moving forward with boldness, people pleasing pastors end up with a lot of people (or diminishing number of people, actually) going nowhere in particular.

Is that what you want your legacy to be? Didn’t think so.

If you want to be liked, you won’t lead.

2. To Pretend Things Are Better Than They Are

So you live in a fishbowl in ministry, and people are always asking you how you are.

It’s so tempting to say things are going great, when they’re not.

Maybe it’s hard at home or your relationship with God seems flat. Or you’re really struggling with discouragement or defeat.

From Outreach Magazine  Why Better Preaching Starts With Better Reading

The pressure to say everything’s fine when it isn’t is intense.

Your public talk should match your private walk.

To people who don’t know you well, even acknowledging things aren’t perfect keeps the dialogue real and authentic. When they ask you how it’s going, you don’t need to throw up all over them and spill your guts, but you might say “We have a few challenges, but I’m grateful for what we get to do here. How are you?”

That’s real. And it’s accurate. You don’t need to say anything else.

The better you know someone, the deeper you can go.

And you should be at full transparency with at least a handful of people, and of course, with God.

3. To Change The Win To Justify Current Results

It’s strange how many of these temptations have to do with not telling the truth. But if you’ve hung around with pastors long enough, you quickly realize that truth is often the first casualty of an environment filled with high expectations.

Take how we handle ministry ‘results’ for example.

Let’s say your church isn’t growing, for example. Who wants to admit that? So it becomes very easy to say “We’re not about breadth, we’re about depth” or “We’re not one of those shallow churches that uses gimmicks to attract people.”

Or, let’s flip that. Let’s say you are growing but you have a gaping back door. It’s just as easy to say “We’re about reaching people, not keeping people.”

One of the hallmarks of a New Testament church is unity.

But it’s so easy to work toward false unity, kind of like a dysfunctional family that pretends everything is great when it’s not. Or the family that stifles truth for the sake of appearances (“everything’s fine kids, just fine. …”).

Even a cursory glance at the New Testament church shows that the unity of the first century wasn’t easy or false. Paul and others had some long, honest conversations and fought more than a few battles to get it. Just read 1 Corinthians.

True unity comes on the other side of honesty.

5. To Attack People, Not Problems

Speaking of conflict, when you really engage it, things can get intense.

It’s so easy in that moment to attack people, not problems. In fact, many leaders conclude that people are the problem. But wise leaders refrain.

From Outreach Magazine  The 7 Pivotal Virtues of Church Growth

When you attack problems, not people, you can begin to make progress.

There may be some people who are out to harm you, but most people aren’t. They are sincerely doing what they believe is best for the future. Their vision just conflicts with yours and that of your team.

If you have a habit of taking non-personal things personally (as I do), it can be easy to impute bad motives where none exists.

If someone is threatening the vision I’m advancing, it may seem as if he or she is somehow against me. However, the more I’m able to believe the best about other people—especially people who disagree with me—the better leader (and person) I become.

Still struggle with that? Try empathizing with your opponents.

You may want to dismiss them, discount them, counter them, or even belittle them (on bad days). Don’t.

Instead of beginning a conversation by stating your differences, why not begin by emphasizing what you both agree on and trying to understand why your “opponent” is upset? For example, instead of saying:

“Josh, you and I completely disagree and I’m not sure there’s anything we can do about it. I just can’t see it your way and you can’t see it my way. ”

“Josh, I’m grateful we share a commitment to Christ as our Lord. And I’m thankful for what you’re doing to help us advance our mission. I sense you’re upset with the direction we’re heading in. I just want you to know I understand that, and I hope we can discuss our differences.”

Do you hear the difference? I think if you or I were on the other side of the changes in an organization, we’d want a leader to approach us with the second attitude, not the first.

When you show empathy, you help people understand that they were heard. And that’s huge. Sometimes that’s all people want.

You may discover that after being heard, some (not all) opponents will change their minds and even support the proposal at hand. That’s the power of empathy.

Carey Nieuwhof is a former lawyer and founding pastor ofConnexus Church in Toronto, Canada. He’s the author of several best-selling books, including his forthcoming book, Didn’t See It Coming: Overcoming the Seven Greatest Challenges That No One Expects But Everyone Experiences (September 2018). This article originally appeared on CareyNieuwhof.com.