Home Features 5 Destructive Things We Say to Ourselves 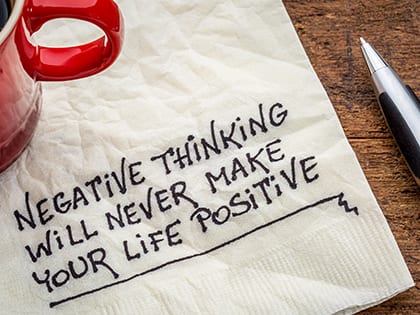 Are you thinking any of these negative things about yourself? Here’s how to flip those comments on their head.

There’s a conversation going on in your head almost all the time as a leader.

Let me guess. Most of the time it’s not pretty.

You rarely say these things out loud, because if you did, well first, it would be embarrassing. And second, you would never say anything remotely this negative to anyone else.

Except you say it to yourself all the time.

And that’s the problem.

So many leaders look like they have it all together on the outside, but they struggle deeply on the inside.

The challenge is negative self-talk. Way too many leaders carry on an internal dialogue of self-destruction.

There’s a major difference between words that are self-deprecating or self-destructive.

And way too many leaders live an interior life of self-destruction.

There’s a major difference between self-deprecating words and self-destructive words.

Here are 5 destructive things leaders say to themselves. I know, because I’ve said them to myself again and again until I learned how to stop. And some days, I have to learn this all over again.

If you struggle with these, guess what? You don’t need an enemy. You have one. It’s you.

So buckle up and see if you can relate.

You don’t need an enemy. You have one. It’s you.

There’s a strange paradox to our humanity.

The self-help feel-good-about-yourself people will tell you that you are good enough. You’re wonderful. Perfect. Amazing. Gifted. Talented.

But deep down you know something’s wrong.

That’s because something is wrong: It’s your sin.

All of us have memories of Eden, but will live east of there now.

Self-affirmation will only get you so far, and it will often lead to what Tim Elmore describes as high arrogance (I’m amazing!) and low-self esteem (and I’m so horribly flawed …). I talk to Tim about this in depth in Episode 187 of the leadership podcast. It’s a fascinating conversation.

This is where the Gospel rushes in. Paradoxically, we all carry within us the image of God and we are sinfully flawed. Sin isn’t just an action, it’s a condition.

And Jesus comes into our brokenness and not only saves us, but deeply restores us over time. The ancients called this process of being made new sanctification.

It really is quite bad. And it really is more amazing that any of us dreamed.

So what’s behind that?

Well, it’s likely the feeling that when God was giving out gifts, he short-changed you. Not only did God not give you six-pack abs, he didn’t give you nearly enough intelligence or brains or charm or whatever.

But underneath that is the lie that God made a mistake. That he didn’t know what he was doing, or got distracted when he made you.

And now you’re jealous of everyone else because God did such a better job on them than he did on you.

Not only is your jealously patently absurd, it’s also deeply unfounded.

The only one who wants you to believe that you don’t have what it takes is the enemy.

First, celebrate what God has given others. Praise them. Jealous people stink at this, but do it. Like that Instagram. Give your rival credit. Acknowledge the person you’re jealous of publicly.

Are you going to get it wrong? Absolutely.

As Craig Groeschel says, if you’re going to innovate, it’s not that failure isn’t an option, failure is a necessity.

The destructive part of that self-talk isn’t that you got something wrong, it’s that sinister “It’s just like me to …” part.

I have messed up more times than I can count. So it’s easy to fall into an “It’s just like me” trap.

From Outreach Magazine  'Movement Day' to Transform Cities through the Gospel

But live there and soon you’ll lose your courage to correct, to learn, to master a new skill and even to change.

Want a bridge? Try this.

Tell yourself, I’ve made this mistake before, but I don’t need to live here. What can I do to help me grow?

The numbers always go down at this time of year.

You always end up screwing up relationships like this.

You always end up fixing other people’s work.

Want out of that? Make always a stop-sign. The moment you think always, stop, reflect, even pray and ask yourself why.

Maybe it’s true that things always turn out that way for you.

But just because something’s been true in the past doesn’t mean it needs to be true in the future.

Look back at the patterns, declare it a new day and try something different.

Just because something’s been true in the past doesn’t mean it needs to be true in the future.

I’ll die on this hill if I have to, but here’s what I’m convinced of: Too many leaders quit moments before their critical breakthrough.

So many leaders declare it over long before God declares it over. And that’s a huge mistake.

Should you ever leave things or quit things? Sure. I’ve left many things in my life.

But it’s always a mistake when you quit because you’re discouraged. When you’re convinced you’re washed up.

Need to leave something?

Quit on a good day. After much prayer and wise counsel.

The problem most leaders have? They quit on a bad day, with little consultation other than fellow miserable people.

So many leaders declare it over long before God declares it over. And that’s a huge mistake.

Carey Nieuwhof is a former lawyer and founding pastor of Connexus Church in Toronto, Canada. He’s the author of several best-selling books, including his forthcoming book, Didn’t See It Coming: Overcoming the Seven Greatest Challenges That No One Expects But Everyone Experiences (September 2018). This article originally appeared on CareyNieuwhof.com.